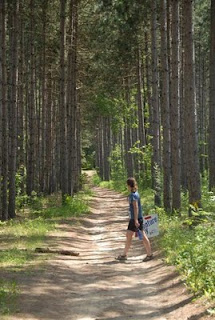 My History At the Moraine Relay

This race is a 14 stage relay, starting with a canoe stage, then a series of mountain bike and trail running stages across the top of Toronto.  You can have teams of 15 or fewer (depending on how many stages each team member is willing to take on!).

We have done it as:


Last year was really great, with only 4 of us it came together really easily, minimal logistics.

This year we couldn't pull the same people together, so it was a choice of actively recruiting or just letting it go for the year.  So we decided to take 2015 off.

... until a few days ago, when a team looking for a cyclist reached out and I signed up!  So I'll be doing Stage 8 again this year, a short fast bike stage.  I have done it a few times, it's mostly roads and fast, the only difficulty being the wind if it's from the West (it almost always is!).  As well there's one rocky/sandy off-road section near the end, but it's short.

Still also have feelers out to see  if anyone needs a canoe team, just to make a full day of it.  Probably not by this point, but who knows!