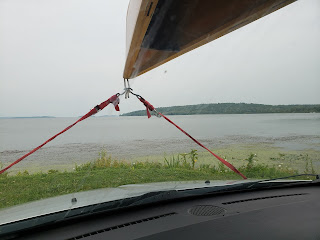 We paddled Rice Lake this weekend as a training run for the Huntsville 110 in September!
Things we found out:
Launch
We put-in at the Bewdley lakefront.
There is a lot of parking, but it was mostly full, and limited to 2h!  We launched at the LCBO dock ("for LCBO customers only", I'm a frequent customer!) then parked on a sidestreet to avoid the 2h limit.
Bonus: Next to the LCBO are public washrooms!
Our Route
Strava Link.
We had planned to hug the south shore expecting shelter from the wind from the South.  Instead the wind was from the East, and it was pretty choppy.
Unpleasant?  A little.
Great chance for us to see how the boat handles chop, though, especially with boat after boat zipping by giving us rollers as well!
The Boat
We bought a 17' cedar strip for this year, very previously loved - handled the waves like a boss.  Solid boat, didn't want to roll at all, a big change from our previous one.
I don't have a great picture of it, but here's my son rocking out the carbon paddle! 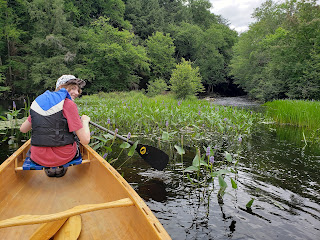 The Route Continued
Without further ado - the map! 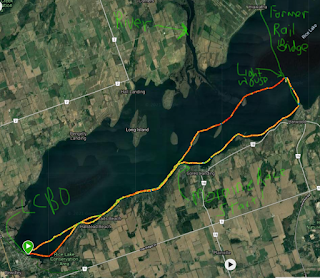 Moraine Relay Start
There is a property near Gore's Landing where we used to start the Moraine Adventure Relay.
The first leg was a canoe leg to Bewdley - then the race alternated between biking and running, mostly on trails, across the Oak Ridges Moraine trail.  Very cool race, hope it comes back in 2022!
Former Rail Bridge
I had read about this but totally forgot, until we came up on this weird straight line of rocks near Harwood. 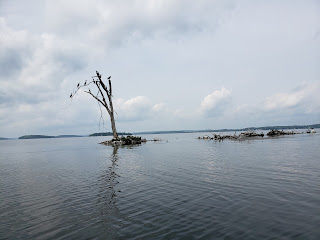 Back in the 1800's, someone tried to build a causeway/bridge across the lake.
I say "tried" because they briefly succeeded, only to have ice destroy the bridge just a few short years later...
You can read more about it here!
The causeway is right under the surface of the water in most parts, just above in others, and doesn't look like much more than piles of rocks out to the island... but pretty cool that it's still there!
Island Hopping
We went out to the island, where you can find this lighthouse. 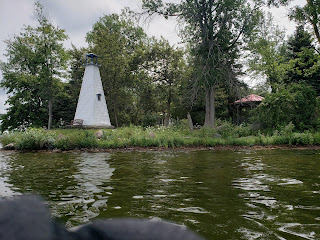 Our plan was to skip island-to-island across the lake on the way back.  At first it was completely calm - water was like glass.
Then a breeze started, and the lake transformed in the blink of an eye.
I recall people saying it was a shallow lake, which is why it kicks up so quickly!  I'm not sure, but it definitely happened quick - we abandoned our initial plan and headed back to the safety of shore.
Never any danger, though, the boat is a rock.
Back to the LCBO which was now open - got the stink-eye from the manager, they definitely don't love people using their lot... it was almost entirely empty and we weren't "parking" so much as loading/unloading, but probably better to use the public dock to the south.
Verdict
I wouldn't rush back to paddle there again, the boat traffic was excessive (fishing boats in the morning, jet skis, speedboats, pleasure boats).  But neat to check out some old history things along the way!
Bonus Info: Onotabee River
I marked it on the map - but you can also head from Rice Lake up the Onotabee River!  It's very paddlable both up and down stream.  It's relatively high boat traffic, as it's part of the Trent-Severn.
This is a paddle we did further upstream: https://www.strava.com/activities/401729954
Lots to explore.
Posted by jonovision_man at 10:35 AM No comments: