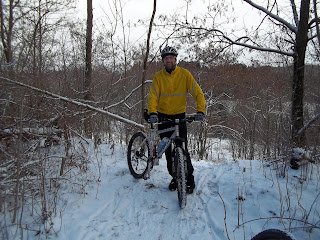 The days are too short, it's too grey, and where I live there isn't any snow... so it's all a bit dreary.  Worse, my knee has been pooched so no running.

What better relief than hitting the trails a few miles north where they've got the white stuff??  So up we went to Durham Forest in Uxbridge, Ontario.

Temperature was near zero, sun was out, and the snow is everywhere!

It was an amazing day, quite a few people had been through already so the trails were packed down really nicely. 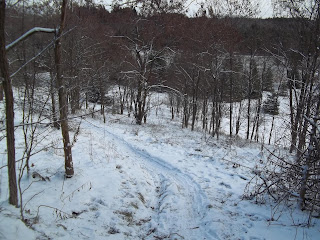 No special equipment (other than a bunch of extra layers of clothing!).  Normal mountain bike tires got the job done.  I've tried going after a large dump of snow - then it gets really tough, but when there's not all that much it's kind of like wet sand.

Best of all - next week looks like more of the same!
Posted by jonovision_man at 1:55 PM No comments: