Ultimately the right position is the one that enables you to generate the best possible results while still being comfortable for the hours and hours you'll spend on the bike.
I used this article as a guide.

The main keys are the hip and shoulder angles, both should be 90 degrees. I had my wife take a picture of me on my bike, then I figured out what my angles were.

The first picture, with the lines drawn in: 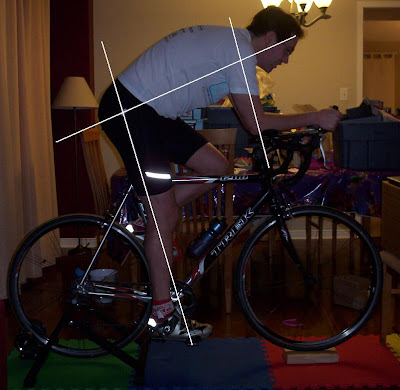 Pretty close actually. As you can see, though, my shoulder angle is too acute (less than 90 degrees) and my hip angle too obtuse (greater than 90).

I still had spacers on my headset, so I removed all of them and dropped the handlebars down as far as they will go.

This is the final set-up I came up with, it pretty closely matches the angles from the article. 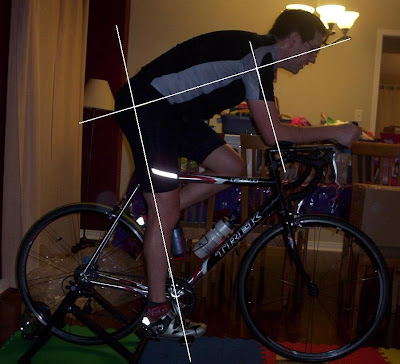 I also measured my knee angle to make sure my saddle was the right height, it seems OK. The only thing is that I'm not sure while I'm pedaling if my heal is dropping down, which would over-extend my leg. It feels comfortable, but I may take some video to analyze my pedal stroke in a bit more detail.

Any comments/feedback is appreciated!

After I posted this blog entry, I received some advice from the good people at Trifuel.
I made these updates, the result is: 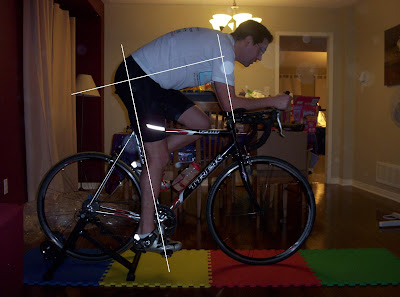 I'm really happy with the position - you can see how flat my back is compared to where I started! I had a two hour spin class today on this bike/trainer combo, and it was completely comfortable. Dropping the seat also really helped my pedaling, I felt much more power at the bottom of my stroke as I could get my heel down properly.

Thanks again to the folks at trifuel - great feedback. :)

Posted by jonovision_man at 4:00 PM 5 comments:

So you've decided you want to get healthy and active, great! I've seen all of you in the pool and gym the last few weeks, there sure are a lot of new faces.

Just like last year around this time... usually lasts for a month or two.

Can you do me a favour?

If you are going to quit in a month, can you do it now instead? It won't really make a difference to your health, and you're just making it too crowded in the gym/pool. It might even save you money, and it will definitely save you time!

You're not a quitter?

So if you're serious about your health - and I sincerely hope you are - then you have to find something you enjoy, that you can imagine doing over and over for the rest of your life. For me, I enjoy cycling, running and swimming, so training is enjoyable.

If it's already feeling like work and misery, you won't be able to stick to it.

Once you find that thing that makes you tick, set a goal. If it's running or triathlon (great choice!) then sign up for a race, and plan for what you will have to do to get there.

Why? Because there will be days when you don't feel like working out, even if it's something you usually enjoy... and if enough of those days get strung together, you'll be off the wagon. If you've committed to something, when you feel like skipping a workout, you'll remember that you can't, or you won't be ready for your race!

All the best, I hope to see you in March, June, November, and next January you'll be an old face instead of a new one! :)
Posted by jonovision_man at 8:56 AM 5 comments:

The concept is simple - your shoe has a cleat on the bottom that clicks into the pedal.

Why bother? By having the shoe and pedal firmly clicked in together, you can apply pressure through the entire 360 degrees of your pedal stroke. You can pull back through the bottom of the stroke, up through the back-stroke.

Instead of "mashing" (pushing down only) you can now "spin", and to do any kind of endurance riding this is a must.

I've been using a mountain bike pedal and shoe (Shimano SPD) up to now, since I already had shoes from my mountain bike.

At least until the strap on my shoe snapped the other day during my spin work-out! Whoops. On the bright side, it's proof I'm pulling up on my pedal during the back-stroke.

This was a good opportunity to switch to road pedals.

The differences:
From a performance standpoint, I don't anticipate a major difference, but with the big mileage I'll be putting in this year comfort is a priority.

Finding Speedplay was a challenge, and ultimately I was able to find a decent Shimano pedal for a good price, the PD-R540's. They're an older model from their 105 series, but they'll get the job done.

The shoes need to be compatible with the pedals, which was easy with the Shimanos. I ended up trying on and liking a Lake CX165 shoe, then found a deal on the 2007 version on a web site.

(A shout out to http://www.cambriabike.com - the shoes were $30 cheaper there than anywhere else, and they had a great deal on pedals too... and only $15 to ship to Canada. My total price was less than half what I'd have paid at the bike store here!)

They haven't arrived yet - the downside of that killer web deal. I'll do a review once I get a chance to try them.

Santa Brought Me a Spare Tire

Moral of the story: The scale is a useful tool to measure weight loss, but it's not perfect and has to be offset by some common sense!
Posted by jonovision_man at 10:32 AM 2 comments:

I've changed my schedule a bit.

My original schedule:
Revised Schedule:
Gone is my June "A" race, I'll still do it but won't build specifically to it. This frees up January and February to ease into Base training, rather than rushing into Base 2 and 3, where long trainer sessions would have been required. And I've doubled up each of the 3 Base periods to give myself a lot of time building up that basic endurance and speed, rather than using time to peak and recover from an early race.

My goals for the Preparation period were:
Base 1 Period Goals

The goals in Base 1 are Endurance and Speed skills, basically an extension of what was being worked on in Preparation with increased duration.
A typical Base 1 week for me will look something like this:

For the next few months, I've signed up for a spin class for triathletes, where you bring your own bike and trainer. It's 2 hours long... so that will be my long ride for the week. I went for the first time today, it was pretty rough!

I will also continue my triathlon group swim classes, they've been great so far.

There are two running races coming up:
A few weeks after the base period is a mountain bike race, Paris to Ancaster. I can't wait, by then I'll have a lot more bike focus, and should be able to improve my last year's result significantly.

Wish me luck!
Posted by jonovision_man at 3:06 PM No comments:

I'm back from a trip to Alberta for Christmas. Lots of chocolate, wine, turkey, wine, sausage, wine, cheese, wine... you get the idea! I don't know yet how much weight I gained, but I wouldn't be surprised to see at least 5 new pounds.

I was able to keep a pretty decent training routine while I was there, though, and kept working on those Preparation period goals.

So a 10 minute walk from where I was staying in Edmonton was a facility with:
Ooooooh yeah. Amazing. It's the Kinsmen Sports Centre, built for the Commonwealth Games in Edmonton in 1978. It's a world-class facility... it's going to be hard to go back to the pee-warm 25m crowded lanes at the rec center here!

I went three times, and every time I had a full 50m lane completely to myself. Heaven!

I was so inspired, I decided it was time to test how far I could swim in one go. My longest before this was around 800m, so my first goal was 1200m, which I did without too much trouble. So I figured I'd try the 1900m half iron swim.

I found it got easier the longer I went, I figured out ways to fight off some of the problems I was having and my form actually got better as I went. For example, my neck was getting sore because I was turning my head to breath... I managed to do a better job of rolling to the side to get air, and found myself just swimming a lot better as a result.

With 1900m in the books, 3800m looks far less daunting... I'm confident I will be able to do the distance by August, comfortably.

I didn't brave the -30 and worse that greeted me when we first arrived in Alberta... kudos to those who do it, I hung out at the indoor track instead!

But I did get out in some -15 and -20. It was completely comfortable with the right layers, I was covered head to toe. I didn't stay out longer than a 1/2 hour, but I felt like I could have. It's pretty cold here in Ontario too, so I'll likely get a few more chances to challenge the elements before winter's out.

I'm excited and eager to get going in 2009. It's going to be an interesting year of challenges, both athletic and not, but I feel I'm ready to rise to the challenge!