Toronto's Marathons - One Must Go

The city has finally decided that Toronto needs one world-class marathon rather than two mediocre ones fussin' and feudin'.

Up until now, Toronto has had the Scotiabank Toronto Waterfront Marathon in September and the GoodLife Fitness Toronto Marathon in October.

They are only 3 weeks apart, leaving some residents fuming... shutting down a slew of streets once for a marathon gets folks a bit upset, but when they do it all over again just a few weeks later? Then the gloves come off.

There are clear benefits to having a marathon in the city. People come from all over Canada (and beyond) to participate, they stay in hotels, eat in restaurants, and they experience the city in a way that is second to none. Even as someone who has lived here more than 10 years, I was surprised how wonderful the people of Toronto were when I ran the Toronto Marathon.

But two marathons? In 3 weeks? It's twice the aggravation for dubious additional benefit.

In fact, it has been argued that having two marathons prevents either one from being particularly successful. The Toronto Marathon had around 2,000 finishers, Toronto Waterfront had just shy of 3,000 (not including the shorter distance races). These are not particularly impressive numbers - even the 30K Around the Bay race in Hamilton draws over 6,000! Chicago is a similar sized city and draws 30,000.

For 2011, the city will put out a request for proposals. Undoubtedly, the two existing races will submit bids, and possibly others.

There is no reason why a Toronto Marathon can't be the biggest and best marathon in Canada, and be a destination race for athletes outside of this country.

Posted by jonovision_man at 1:18 PM 3 comments:

This little animation has been making the rounds for the last few months.

He's a virtual swimmer who is supposed to represent smooth and near-perfect form. There's some debate to the perfection of Mr. Smooth, but he's so much closer than me I'll call him "good enough"!

Of course, being virtual, he doesn't have to worry about sinking, breathing, or having his butt handed to him by the 14-year-old girls from the local synchronized swim team (don't ask).

I'm too slow to really give people swim advice, but I do know a few things I've done wrong over the years. Hopefully they spark something in perfecting your own swimming technique!

The real take-away from Mr. Smooth is just how flat and clam his body is when he's swimming. It looks effortless (and of course, being a fictional swimmer, it is!). He is just laying on the water, stroking forward with a gentle kick... it's hard to be that comfortable in real life, but with the animation it's a little easier to visiualize.

Posted by jonovision_man at 1:04 PM No comments: 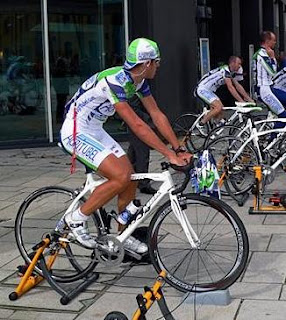 The trainer is cycling, minus almost everything I love about cycling.

Oh sure, I'm on my bike, pedals are moving same as always.

Now matter how much I turn up the fan, it's not the same as that feeling of moving through the air outdoors. I'm not getting anywhere, not seeing anything new, not fighting the elements.

It is soul-sucking. But when you live in Canada, there are times of the year where it's a neccessary evil.

So here are a few things I've found make it more tolerable, sometimes even almost enjoyable (but not quite).

Coach Troy Jacobson leads you through a complete workout. There are several videos with different goals, usually from 40-60 minutes long. And if you listen to Coach Troy, you will get a heck of a workout, and you will learn to hate him intensely (nothing personal Coach, but I equate your voice with severe pain).

Heart rate monitor, cadence meter, speedometer - all of them give you data to understand and think about, which beats watching the clock tick down (it'll never get to 0:00 if you watch it!). Set some goals (or let Coach Troy set some for you) and use your toys to track them (ie. stay above 120 rpm for 30s on , 30s off, repeat 5 times).

When I'm doing less structured riding, I find old cycling videos of Tour de France stages or Paris to Roubaix really get the job done. You find yourself matching their cadence almost like you're riding with them.

And if you close your eyes and let your mind wander just a little, you almost feel like you're in front of the TV watching the Tour de France...

Snakes on a Plane

No. Don't do it. Terrible movie, and not the least bit motivational for cycling.

In general, non-cycling content just doesn't get the job done for me. Your mileage may vary, but no matter what, stay away from Snakes on a Plane. Even if you try to watch it ironically.

It's going to be +2C here tomorrow (35F), so on go the long pants, shoe covers, gloves, etc and I'm heading outside... it's a bit of extra work getting prepared, but a break from the trainer helps me remember why I'm doing it!
Posted by jonovision_man at 2:53 PM 2 comments:

My goals up to now have mostly been around distance.

It's always been very rewarding to cross off those new distances, to go that little bit further, but now I've gone as far as I really care to...

I've been getting faster each year, but I feel like it was almost coincidental. Doing more of anything will make you faster at first, but there's a point where it's not enough. It's time to focus and do some serious work-outs with getting faster as the priority, rather than just going further and further...

Cycling Speed Plan
Biking is probably where I've been the least structured. I pretty much have two rides I do: long and slow or short and all out.

This year I'm going to work on carrying the intensity of a Spinervals spin session onto the road on my short rides.

When I say "hills hills hills", I don't mean hill repeats, I mean incorporating hills into almost every run. On long runs, this means slowing and keeping a steady heart rate. For short runs, I treat them more like intervals, where I go hard up the hills, recover, then go hard up the next one.

Trails - I felt like the off-road running I did at the end of last year strengthened a lot of the muscles that don't get direct attention from road running. I'm going to try to get out on the trails now and then to keep it up. And it was fun!

My biggest limiter in the pool is still form, no question. If I improve my form, I will go faster. So my workouts have been around practicing form, rather than really doing a swim "work-out" as such.

I'll change that up a bit this year, and try to do sets where I focus more on really pulling through the water with power. It's a secondary concern, though.

I've talked about this before, but it's a bit part of going faster: dropping weight.

No matter how hard I train, if my weight stays where it is, I'm leaving something on the table. That's not good enough! I dropped a few pounds before Christmas, some of which were kind enough to return, but I would like to see a 10-15lb drop by the time I do Muskoka 70.3 and the fall marathon.

I want to find a sub-1:45 half marathon by the spring, and somewhere around a 3:45 marathon in the fall. I think it's there. And in general I just want to see faster bike splits, especially at races I've done before.

Posted by jonovision_man at 8:58 AM 2 comments: