Houston, we have a problem. 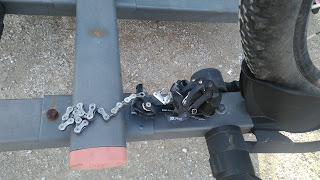 During a ride, my rear derailleur had a piece that bent, and chipped out a part of the hanger.  Nothing I could do to fix it... it wouldn't stay put with any force at all on it.  It's toast.

We had just started our ride, though, and missing a weekend of fall mountain biking wasn't an option.

So to salvage the day... we removed the rear derailleur (entire thing, including hanger).  Picked a gear that would get the job done for the day.  Shortened the chain to fit that gear perfectly... and converted the bike to a temporary single speed.


It worked out really, really well. With no tension it had to be pretty snug on the gear it was on - we had it very, very snug... maybe too snug, even, I noticed the wheel was being pulled a tad off center... but still worked!

As with any single speed, I was grinding at very low cadence sometimes, other times spinning like a gerbil in a cage... but it was solid and fine, even set a few PRs on Strava segments out there.


Posted by jonovision_man at 8:47 AM No comments:

No progress.  Had a houseguest, which meant we went out a lot and ate/drank in celebration.  Funny how that's such a big thing with humans, eating and drinking as entertainment rather than just sustenance.

Back on track now, though, lots of exercise this week, it's coming off again.
Posted by jonovision_man at 3:09 PM No comments:

... unfortunately I've slipped a lot over the weekend so when I check in this week's weight, it probably won't be good news... but still doing this thing!  Ya!

Posted by jonovision_man at 10:15 AM No comments: