Zwift: Volcano Circuit 25 times for the "On Fire!" Badge

I added these badges to my list of Routes.

Strictly speaking this is not a "Route"... it's a set of three "Cycling Achievement".

But since it can be done in a single ride and requires you to do a specific ... route... I'm counting it!

All of these involve laps of the 4.2km Volcano Circuit.

There are a few decisions you need to make... 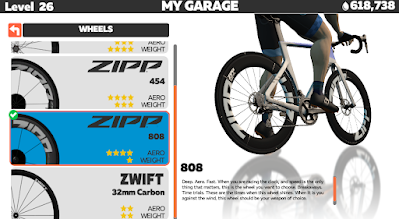 I went with my most aero road bike, and the Zipp 808's - the most aero wheels in the game.

The other option is a TT bike, but as Zwifters know it doesn't get any of the benefits of drafting.  Not terribly realistic, but hey a TT is meant to be a solo effort, right?

I was doing this on Saturday afternoon so I was counting on finding a few wheels to suck, and I did!

I noticed I did better out there than comparable (or stronger) riders on TT bikes, so if it's busy that's the right choice.

Caveat - there is some kind of XP bonus for passing under banners on a TT bike.  So if that's important to you...

Direction and the U-Turn Bug

This ended up being a big disaster for me...

My plan was to start Clockwise, then switch to CCW every so often.

So after 4 laps, I crossed under the banner then hit the "U-Turn" button.

I had experienced this "bug" previously after a group ride, but I didn't realize the worst part of it... not only do you not U-Turn, your maximum speed becomes 24km/h!!!

I soldiered on for a bit not realizing this, then tried to change bikes to get it to snap out of it, but nothing worked... so I abandoned my first attempt.

After cursing and refilling some water bottles, I decided I would start over and do it today, rather than find something else to ride.  In for a penny, in for a pound! 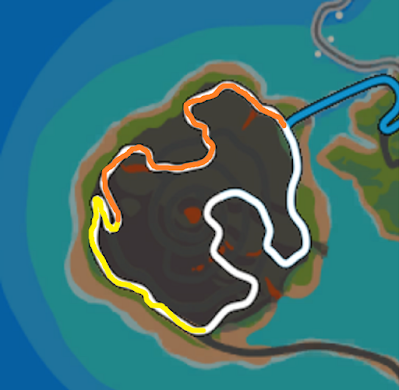 It was less boring than I might have expected, but this is largely due to drafting.  I was always keeping an eye on riders around me, trying to maintain a pretty steady 2.5w/kg and then up the pace to grab a wheel when the opportunity arrived.

The blue in the image is the lead-in - it counts as kilometers, but you only do it once.  Easy peasy!

The white section is the quietest section, hard to find a draft unless you're really lucky or tailing someone going the Cicruit.

Yellow is where you get some joiners from the other routes, cutting through the volcano edge but not hanging around.  Lots of riders here, and they mostly continue to the orange section.

Orange is the best section - you get people coming down from climbing the Volcano KOM added to the mix - it's nice and busy, lots of wheels, at least until you pass the blue road again!

I got carried away a few times chasing down wheels - when you have a fast rider in front of you, it's tough to let it go!  When that happened and eventually the wheel vanished on me, I would knock back my wattage to 2.2w/kg for a bit to recover before getting back to the 2.5 target.

Ended up doing a 26th lap to cool down - probably could have done that as a 25th lap if I had planned ahead!

With the other 4 laps I did in the aborted U-turn ride, that makes 30! 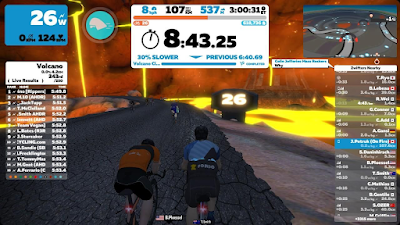 Not excited to do it again, but will take the learnings when I eventually try to tackle the 11 laps of the London Loop for the Full PRL...

Posted by jonovision_man at 9:24 PM No comments:

Zwift: Completing All The Routes - Update #2

This route is tough - it does the same climb twice, first reverse of the "normal" flow, then forward.

The reverse route is especially difficult and spends a lot of time at 10%+!

This put a bit of a dent in the Elevation progress, but I still have a lot of climbing to go before the routes are done.

I also took the time to bang out a short ride to finish up Yorkshire!  The 3 easiest worlds are done at least. 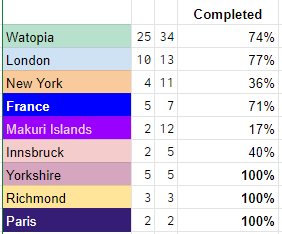 Some very big intimidating rides (and climbs!) to go, though!

Posted by jonovision_man at 9:19 AM No comments:

Zwift: Completing All The Routes

It's that time of year in Canada, where the sun sets earlier and earlier and the dreaded Indoor Trainer comes back into one's life.

... except with Zwift, I no longer dread it.

Last year I started a quest to complete all the Route Badges.

While I was away, Zwift introduced a new world... Makuri Islands, and with it 12 new routes!

I dutifully added them to my master spreadsheet.  I've completed 48 of 92 routes, representing 49.5% of all the distance - but only 26.85% of the total Elevation (climbing!). 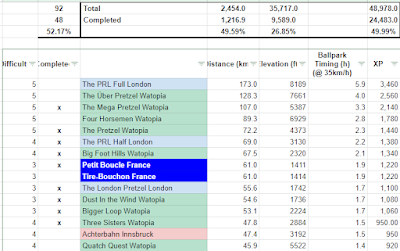 Lots to do, still, should be a tough winter.
I'm especially nervous about "The PRL Full" in the London world.  173km and probably 6-7h on the trainer sounds like a special kind of hell, really need to find a group ride or something... The Mega Pretzel was plenty hard enough, thanks!
Will keep the blog updated with some of my experience as I go.

Posted by jonovision_man at 12:46 PM No comments: