This post is more for me so I don't forget where these are... but if I think they are cool, you might too!

When I say "Durham Forest" I am refering to the full set of properties, including Walker's Woods and Glen Major... technically they are separate.

So there are a few pine sections along these trails, but this one is by far the coolest.

It is in the East Duffins Headwaters trails. Specifically, the Brock Tract. This is a much quieter and less used part of the forest.

How to get there:

It's haunting... the first time we rode into it we literally stopped in our tracks just to absorb it.

Cool to Ride: Snakes and Ladders

This one is cool because it's so fun to ride.

I'm not quite sure how to get back to this one, I think it was near signpost 12 on this map. We stumbled across it in the Walkers Wood section, there was a single track sign that someone had written "Snake and Ladders" on. We hit it last year, too, but it didn't have a sign.

All I know is that it's crazy cool, you are either turning or ... well you're always turning. Left, right, left, right, between trees, up little hills, down little hills. It's challenging but in a fun way, you're on your bike pedaling, not on your feet trudging through stuff.

There is also some neat stuff between posts 19 and 18, which I think is part of Glen Major. South of the fence... banked corners and fast.

Posted by jonovision_man at 9:28 AM No comments:

Last big race of the year in the books, time to kick back, relax, and try to avoid getting fat!

What to do? I'm an addict, so I won't stop completely (not even close) but I will cut back and have virtually no structure from now until late December.

The road bike is parked, and has been for a few weeks already. This is the season to get dirty, hit the trails, have fun.

Mountain biking on the weekend for as long as I feel like going out (usually around 2 hours), cyclocross during the week for an hour or so... and that's about it.

That's not the same as mailing it in... I still go hard at times. When I feel like it. No pressure, just fun.

Once the snow falls, the indoor trainer will come out, but nothing serious until January.

I'm going to maintain a weekly long run of 15km, just so I don't totally lose my running base.

For fun, I introduce trails. Honestly, I never really dropped trail running though the season, it's something I like to sprinkle in there now and then to keep things interesting and surprise my muscles a little.

Overall mileage = who cares! Run when it strikes me.

I haven't been in the pool since my last triathlon in September... I'm re-evaluating this in general, I don't really enjoy swim workouts all that much, so it's on the back burner until I feel the urge. I'll probably get out there again soon just to see where I'm at, but won't be swim training until I decide what triathlons - if any - I will be doing for 2011.

I love looking forward to the next season... so many new challenges around the corner and exciting events. Now that I have a solid endurance base, there is really nothing that intimidates me all that much, so the sky is the limit! Can't wait.

The highlight will almost certainly be the New York Marathon. I have a guaranteed entry for 2011.

Other than that, I see 2011 as being more bike-heavy than 2010, likely more off-road-heavy, and triathlon light. Can't wait!

Posted by jonovision_man at 7:36 PM 3 comments:

I love this race... it's a fantastic showcase for the city. It starts on Yonge Street, heads over to Casa Loma, then down the Rosedale Valley, through St. Lawrence Market, the financial district, down to the waterfront for a long stretch along Lake Ontario, and then finally up University Avenue to finish at Queen's Park! Whew!

Really, it is. I've done a lot of endurance events now, some taking much longer than the 3.5-4 hours a marathon takes, but running a full marathon beats you up and saps your energy in ways you can't believe.

I started on my pace, which was planned to be slower than my goal pace. For some reason my heart rate was higher at this pace than it had been in training, right from the start. I felt good, it felt easy, but my heart rate was high. I have no explanation for this, and I don't know for certain if this played a role in the wheels coming off later.

At about 5km, the weirdest thing happened. John Tory ran across the street directly in front of me, in a suit. OK maybe that isn't the weirdest thing, but it was pretty bloody unexpected! If it was any later in the race, I'd have chalked it up to hallucination.

I felt pretty good up to 10km, and then the downhill started. It still felt easy and fun, everything was clicking, legs moving well.

The Second Half (aka "Where it gets hard")

We hit halfway and the work began. I started feeling a bit sluggish, and keeping my target pace got a bit tougher.

From 22km to about 31km we ran into this strong headwind. I'm no marathon expert, but it seems to me this is probably the worst point in the race for this... it's when you really want to be settled into a maintainable pace, not fighting a soul-destroying wind!

The Last 10K (aka "Where it gets excruciating")

When we turned around at 31km, I knew 3:35 was gone. I felt tired. Not just tired, but like my legs weren't fluid anymore, they were stiff and took more energy to move. I think this is what separates shorter distances from the marathon, that crushing fatigue. I can get away with less running and making it up with lots of biking on short stuff, but for the marathon you really need those running miles, and I didn't have them this year.

I tried to find a pace I could hold to the end... settled on 5:30/km (vs the 5:08/km I had been planning to target), and for awhile I kept this up. But at 36km even this became too difficult... I stopped looking at my pace and just focused on giving whatever I could to keeping going, fighting the urge to walk. At 39km the course is slightly uphill to the finish... although it didn't feel very slight! I kept it going as best as I could, now hitting 6:00/km, and finished.

The finisher's medal is HUGE! After running 42.2km, it felt like 100 pounds around my neck, yikes!

It's a personal best for me by over 13 minutes, which is satisfying. But that was two years ago, and I've been crushing my times in other distances from that era... I really expected more. Perhaps foolishly.

It seems to come down to this: up to the half marathon, I can get away with 2-3 runs a week (one long, one tempo, one other) and enough of the cycling fitness carries over to still be able to improve and do well. But for the full marathon, there is a wall you can't get over without the big running mileage. All the cycling in the world won't make your legs efficient when that fatigue sets in.

I'm still not sure why my heart rate was so high early in this race, it could also be a factor. I felt OK, though, so not sure why that was or what role it played.

Done! Next marathon is likely the New York Marathon in November of 2011. That will be more of an "enjoying the scenery" marathon for me, a tourist activity rather than being out there to set a personal best. But we'll see!
Posted by jonovision_man at 3:49 PM 3 comments:

This is the last time this race will be run in the fall, as it moves to spring starting in 2011. The last chance to run the Rosedale Valley with full fall colours!

Me and the Marathon

I did this race in 2008, my one and only marathon attempt (not counting the marathon at Ironman!).

It was my second year of running. My goal was to finish, I came in just under 4:00 (3:56:42 to be exact!) with a horribly positive split and some very tough closing kilometers. I learned a lot from that experience - 42.2km of running is something you need to treat with respect.

I will hit the start line this year more than 10 pounds lighter and with thousands of kilometers of running (and an Ironman!) under my belt since the last attempt.

I'm a very analytical person, and my last experienced made me very hesitant to merely go by feel... so I came up with this: 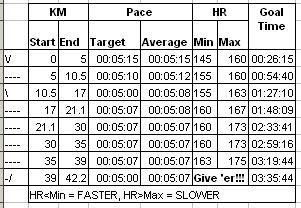 I have both pace and HR targets. Basically I will try to hit the pace I've chosen, only altering it faster or slower if I find I'm outside of the Heart Rate zone I've set.

This race is net downhill, all in the first half, and last time I let myself get completely carried away by this. I ended up going too fast, and by 35km I was in full blow-up panic mode. I've picked a slightly faster pace for the downhill section (10.5-17km) and will only go faster if my HR is very low.

So my goal is 3:35:44... how's that for specific? It's in the ballpark of where McMillan's Running Calculator tells me I should be (3:33:22), based on my half time from May. Anything sub-3:40 will be satisfying, the closer to 3:30 the more I'll start getting delusions about qualifying for Boston someday!

I'll bring a couple of gels and will rely on the course Gatorade/water. Target is 250 calories per hour, but hard to tell with those little cups. Basically it comes down to "what I can stomach".

One addition to my arsenal - Endurolytes. I first tried these at the Ironman Muskoka 70.3, and it really seemed to help fight off any cramping. I've had trouble with cramping before, so it can't hurt.

Giddy-up!
Posted by jonovision_man at 9:11 AM 3 comments: