I have also always ridden bikes with Shimano shifters, and it has always been tough for me to reach the far lever to move to a bigger cog when I'm in the drops (the bottom curvy part of your road bike handlebars). 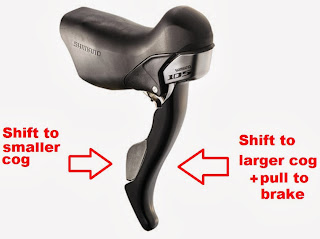 Smaller cog, no problem, it's nice and close and easy to click.  But that big lever has never worked for me from the drops.  So most of the time I end up going up onto the hood to go up cogs, which stinks.

Then I bought a new bike with SRAM Rival shifters.  As many of you will know, they have "double tap" technology, so that little closer paddle does both the up AND down-shifting. 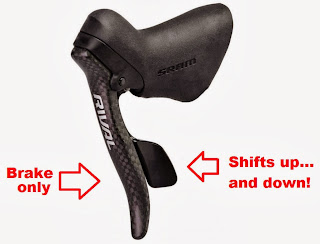 Lo and behold, I can stay in the drops and shift!  Both ways!  Comfortably!

Ha ha of course not.  If it were, what would all the Shimano and SRAM fanboys on cycling forums do with their spare time?

Some people don't like the double tap thing, and it certainly is a bit different to get used to.  Some people have big hands and don't have the same problem.  And there are a myriad of points made out there on the forums trying to show one is better than the other...

Ultimately I think it's just personal preference.  From a usability perspective, SRAM seems to work best for me.

Posted by jonovision_man at 11:07 AM No comments:

Beautiful day!  20C, sunny skies, fall colours, how can you ask for anything more? 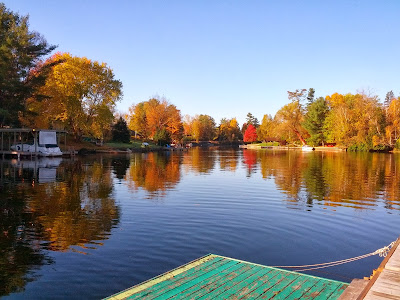 Muskoka was a beautiful backdrop for this race.  We were doing the 18km canoe race in our 18 foot Jensen-style canoe.

The kayaks started first, the canoes one minute behind.  We lined up and from the start we noticed we were going to be in tough!  Everyone else had carbon paddles and super rigged out boats, we were the only ones rocking wood paddles in the 18km.  Serious crowd!  We might have been more competitive in the 10km, but there were some pretty hard-core folks in that one too, so who knows.

Race starts and we find ourselves in last.  There's a sinking feeling (so to speak) as you watch other boats leave you in their wake!  But our goal was to experience, learn and enjoy, compete with who we could.

Soon after the start we were passed by the two "North Canoe" boats... these are giant boats with crews of 6+ people on them - they can really move!

Finally we managed to catch up on a few of the kayaks, so started to feel a little better.  Some of the canoes that had left us in the dust started to come back to us as well, or at the very least we weren't losing more ground.  We just kept paddling, hoping to keep catching folks as the race went on.

We finally emerged from the Muskoka River and into Lake Muskoka for what was to be a quick run around the islands, then back up the river.

But... it was not at all clear which way to go!  The glut of boats we had been chasing went straight out into the lake, but perpendicular to where the island actually was.  During the briefing they implied the rescue boat would be there to guide us, but it was way over by the islands (and it wasn't clear that it was the right boat from afar!). 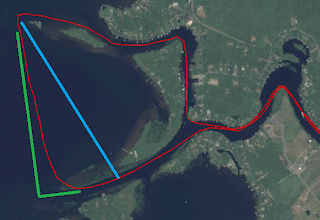 In the end it didn't trouble us too much, and actually allowed us to catch up to the glut of boats we'd been chasing.

Shortly after, there was more confusion - were we supposed to turn left or right?  (near the top of the map).  My partner correctly said "we are supposed to go around 3 islands" so we guessed left, correctly.  But again, the lead boats in our group went the wrong way a bit and had to double back.

The rest of the race was back in the Muskoka River, now heading up-stream.  This was tough at times but the dangling carrot of boats in front of us kept us motivated.  We passed one kayak, but there was a white canoe just ahead of us that we really really really wanted to catch.  They were so close most of the way up the river, at one point we were right in their wake... but when we pulled out to pass we just couldn't do it.  Eventually we got caught up in some traffic (10km racers on their return leg) and they took off on us.

A bit later the kayak we'd passed last caught back up to us and passed us.  Since they started 1 minute ahead of us, we figured we just had to keep him and the other kayak within sight to beat their time.  It's apples to oranges anyway, kayaks and canoes are much different beasts!  But just something to shoot for.  In the end that worked out OK. 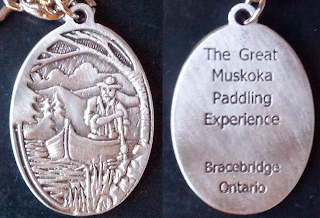 Cool keychain as a momento!

Great "Experience", beautiful river setting, amazing volunteers and competitors, just a fantastic day all around.  The weather was the piece de resistance.

Only small complaints it the lack of clarity on where the course went once we hit the lake, but if we'd done our due diligence with the map beforehand that shouldn't have been a problem... and ultimately didn't cost us that much time.


Posted by jonovision_man at 12:21 PM No comments:


With a name like the Great Muskoka Paddling Experience how can you possibly go wrong?

Great is great.
Muskoka is great.
Paddling is great.
Experiences are often great.

10km or 18km.  Of course we choose the 18km, not because it will be more fun at the time, but because theoretically it will be more rewarding!  And we want to see all those top guys kicking our butts to see what they're doing that we're not.

Oh and it's a pretty long drive, so gotta get one's money's worth.

Posted by jonovision_man at 6:35 PM No comments: