I've wanted to run this race since I first heard about it.

It was first run in 1894... this was the 115th anniversary, making it the oldest road race in North America. There were thousands of people there - in addition to the 4915 30K finishers there were relay teams, 5k runners, and 30K walkers. I've never seen so many runners in one spot!

Last night, the forecast was for light rain and 12C. I decided to wear shorts.

This morning, the forecast changed to steady rain and it was 8C...

I took my running tights with me just in case, but in the end it seemed just warm enough to stick with the shorts. Not ideal, but nothing about the weather was ideal! It rained from start to finish, it was pretty miserable.

It didn't start out well. My stomach was hurting almost immediately, it was raining, Hamilton is pretty dreary, and I was dodging slower runners who decided they should be in the front... I'm usually pretty excited and chipper at the start of a race, but I was miserable.

I went out faster than I'd planned, but it was noticeably downhill so I didn't worry too much about it.

By halfway nothing had changed - I wasn't having a fun day.

Then something magical happened - a guy yelled "Welcome to Burlington, aren't you glad to get out of Hamilton?" I hate to pee on Hamilton, but I really was glad to see Burlington. The scenery changed to nice rolling hills through gorgeous treed neighbourhoods, it was awesome! And the challenge of the hills kept my mind on something other than my stomach cramps.

I was mentally prepared for the hills just from reading the comments of other runners, but they still really take a lot out of you. I tried to keep my feet turning over quickly on the downhills, and kept myself from blowing up on the uphills. Most runners hate hills - I love them, probably because of my cycling background! It was challenging and fun.

This race has a few weird traditions - there's a midget (little person?) with a stereo blasting "We Will Rock You", you're supposed to high-5 him (low-5?). I skipped it, but still smiled. And when you get to the top of the "big hill" there's a guy dressed up as the Grim Reaper, and some signs inviting you into the cemetery... cute touches.

By the time I crested the "big hill" I was feeling pretty spent, but still had enough for a pretty decent finishing kick. In the back of my mind I was hoping for a sub-1h40 finish, but couldn't quite find it today. Something to target next time.

The piece de resistance - the streets lined with cheering spectators, then you head down a ramp and finish in Copps Coliseum. It was amazing... I'm on the big screen, there's a cheering crowd, they call out your name, wow. I soaked up the experience as much as I could in my state of near-delusion.

I love a challenge and this race delivered. The rain, the stomach issues, and most of all the hills gave me more than enough to overcome! Mentally I stayed in the game and kept the legs going, and that's half the battle in endurance sports.

And as far as nutrition is concerned, I'm learned my lesson - don't eat too much solid food before a run! I had a bowl of cereal and two energy bars between 6:00am and the 9:30am start, as well as two Gatorades... I'll stay away from dairy and go with less solid stuff.

It would be very difficult to negative split this race - the hills in the last 12k are tough, they really beat you up.

Posted by jonovision_man at 4:04 PM 2 comments:

Potato benefits:
Add a little salt and bang - the perfect food for the endurance athlete.

I tried the potatoes this weekend - they were fantastic!

I also tried sweet potatoes, that didn't go as well... too mushy. But the small red potatoes hit the spot, especially with a generous sprinkling of salt. It didn't even bug me that they were cold, and like he says, with the moisture they go down easy.
Posted by jonovision_man at 10:27 AM 1 comment:

Done! This was a race day sign-up, it wasn't really part of the plan, but I hadn't raced since October and I got the itch.

I've wanted to do this one ever since I heard about it, although it's a bit long for an early season effort. It's kept me running all winter, getting in those LSD's (long slow distance). I'm up to 25K and ready to race next weekend!

I've done this race 3 years in a row, so it makes the cut just based on the fun factor and continuity. I'm going to spend the rest of the year on the road bike, so why not have some fun in the mud in spring...

They advertise this one as the fastest 10K in Canada... it's predominantly downhill, and everyone who does it seems to set a Personal Best. I don't have a very good 10K time, so here's my chance! And 10K is easy to recover from, this shouldn't put a dent in my cycling, which will be ramping up big-time by this time.

2000m swim, 55k bike, 15k run... this will be my longest triathlon to date, and the longest I'll do before Ironman. I went back and forth with this one and a 1/2 Ironman, but the 1/2 was a little too close to the full for comfort. This gives me time to recover and get some solid miles in before Ironman.

I haven't decided which one I'll do, there are a bunch in Ontario in July. I just want that last race experience to get me pumped up for the big day! I'll treat it as a training run.

3800m swim, 180k bike, and a full 42.2k marathon... the is my ultimate goal for 2009, and most likely the longest distance and time I will ever attempt in my life. I want to get there healthy and prepared, it's the only race of the year that matters, everything else is just appetizers.


October/November/December
I'll play it by ear, but I want to do something to keep myself sharp before training for 2010 starts!

I've been off work for a few weeks, which has been great for training (but not so good for the bank account!). I start a new contract on Monday, so back to juggling work, training and family commitments.

A typical work week for me looks like this:

Things move around a lot depending on other commitments, how I'm feeling, the weather, etc.

But basically:
I try to get things done in the morning so I'm still home with the kids in the evening! I hope to shift my evening bike ride to the morning once the light permits it.

Posted by jonovision_man at 10:15 AM No comments:

The bike and I were both perfectly clean before the ride... 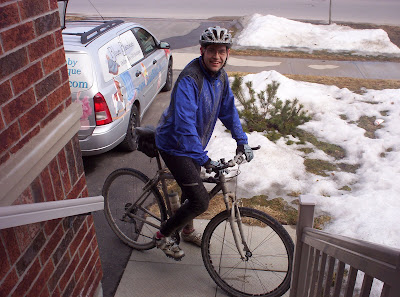 The bike is my hybrid - a Gary Fisher Utopia. It's pretty old, about 7-8 years now, but I still love this bike... perfect for the wet and muddy gravel roads out in the country just minutes away from my house.

+15C, sunny... a bit windy, but I barely noticed. Just a joy to be back outside. I even love the mud (well not the mud between my teeth or in my eyes, but the rest of it was a joy!). And there's something cool about biking by a ski hill with people still skiing on it.

I felt really great today. All those hours in spin class and on the indoor trainer have paid off, I'm way ahead of last year at this time. No fatigue, just strong start to finish, and I was able to really attack the super-hill that makes this ride worth doing.
Posted by jonovision_man at 1:13 AM No comments:

Preview: Around the Bay 30K

The first year this race was run, making it the oldest road race in North America, even older than the Boston Marathon.

The number of participants

The number of kilometers around the Hamilton Harbour

The number of times I've run this race before this year... I got injured last time in the weeks leading up to it. :(

I'm super excited about this race... between the tremendous history and the huge number of participants it promises to be a really exciting day. Not to mention the fact that the finish line is inside Copps Coliseum!

The course itself is known for having a tough finish, with a series of challenging hills in the last 10K of the race. Pacing will be key, I'm going to try to save myself for a strong finish like I did in Peterborough last weekend.