My buddy and I did the 4 hour version of the Rockstar Adventure Race.

The race started with about a 1.5km run, before heading out on bikes.  This was presumably to spread out the bikes before hitting the trails - very good idea indeed!

By the time we got biking the skies had really opened up.  I was quickly into the red, badly... just the heat, humidity, and fast start really kicked me in the nuts.  I pushed to keep up with my buddy but a few times had to slow us down.

After this point we had over 3 hours left to visit as many checkpoints as possible.  We were given a map of all the checkpoints with brief descriptions of each.  You could paddle (canoe) or run to all of them, your choice.

A few of them were goofy challenge things - like you had to go out on a rubber inner tube to a flag in the middle of a pond, or dive to the bottom of the lake to retrieve a CD, or use a slingshot...

The first problem was our plan had been to canoe first - but because of the storm we weren't allowed on the water.  Instead we did one of the running loops to pick up two 50 and two 40 point checkpoints.  That went pretty well and fast.

After that we did the canoe to the paddleboard station, where we had to use the stand-up paddle board to retrieve a flag from a buoy.  My buddy did that one, went well.

Next we paddled to everything we had intended to paddle to.  Our big mistake was in our planning we thought we could hit them all, so we didn't spend a whole lot of time strategizing on which to put the highest priority on.  Sometimes you could nail off a bunch of 30/40 pointers in quick succession (ie. on the boat) but other ones like the inner tube just took way too much time.  We had to run about a kilometer each way, carrying an inner tube, plus the time to swim out - it took way too long for 60 points!

As a result we missed out on the 80 point one, just ran out of time.

At the end we had a choice to nail off a 30 and 40 point one one by running or to canoe back to the finish and try the goofy ones near there.  We chose to do the run - which I think was the right choice!  Except the skis opened up - massive terrifying lightning and thunder.  Some of the flashes were so close, there was nothing between the flash and the thunder.  Freaky!

Because of the storm we were stuck out in the middle of nowhere and couldn't paddle back to the finish in time.  It's supposed to be a 10 point penalty every minute you're late, we were very very late.  But they stayed true to not penalizing people for being stuck off the lake, so what would have been a 290 point penalty was reversed.

We won!  I know we weren't the fastest team, but I think we made best of our 4 hours.  Maybe not perfectly, but well enough to win.

It was a really good time.  The format was cool, lots of thinking and even the navigation was pretty darn cool.  Other than my being in the red for half the race I thought we did really well, learned a few things for next time.

Posted by jonovision_man at 3:20 PM No comments:

Adventure Race - mostly adventure from the sound of it.

Marked mountain bike course, then run/canoe through woods and water to as many checkpoints as possible before 4 hours is up.  8 hours for the brave!

This race is put on by the same folks who run Storm the Trent. We had a great time, it was well run, so why not try another one?

I've heard rumours of having to dive to the bottom of lakes, paddle inner tubes... and other nonsense.  OK calling it nonsense is a little strong - I'm sure it's "fun" but I like racing more than fooling around!  Hopefully that goofy stuff doesn't take up too much of the 4 hours and the rest will be more of an endurance and orienteering test.


Posted by jonovision_man at 12:22 PM No comments:


Had a great ride today! 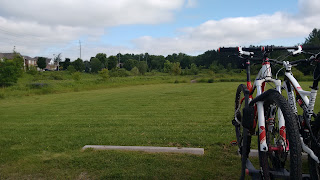 We drove to Uxbridge and started in this park, which had a little linking trail over to the Rail Trail.

Kilometers 1-15 were on the Uxbridge-Lindsay rail trail.  This section followed the Beaver River Wetlands, very pretty and natural. 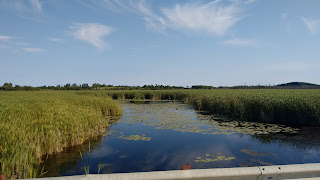 Blackwater used to be a real railway junction - at this point you can either travel north up to Cannington/Woodville or east toward Lindsay.

We followed the Beaver River Wetland Trail north first.  This trail has been massively improved since I last rode it - all but about 5km is nice hardpacked small gravel, very well groomed and flat.  The other 5km is the old rail bed, which has suffered from some serious frost heave... we were on mountain bikes so no trouble at all, really not that bad.

Sunderland is the only tricky part - the trail sends you off onto Highway 7 and you have to go through the Esso/Co-op parking lot to get back on it.  Poor sign-age to tell you how to do this, so bring Google or just poke around...

The other somewhat annoying thing is the north end of the trail ends abruptly before you get to Woodville... you're punted out to roads as the trail is fenced off (private property apparently).  You can choose to go north Woodville to refuel, or skip it like we did.  Sorry Woodville, fix your trail.

This isn't trail, it's just a road link we made to get to the other rail trail... but gave the opportunity to restock on Gatorade and ice cream at the corner store in Oakwood.  Mmm, Kawartha ice cream!  Roads were generally not too busy and nice country (if you like farms). 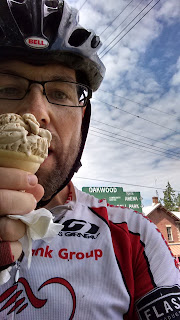 This stretch of rail trail runs all the way to Lindsay, but we picked it up mid-route just south of Oakwood.

Back to very well groomed rail trail, really nice.  I thought this part was just going to be us out in the open surrounded by farmland - I was pleasantly surprised to find a lot of variety.  Farms gave way to forest which eventually turned back to the marsh, as we returned to the Blackwater-to-Uxbridge section we had started on.

The trails were mostly really good.  We rode mountain bikes this time, but a cyclocross or hybrid would be more than capable.

I was struck by how removed all of these rail corridors are from humanity.  You pass the odd house or farm and cross roads here and there, but there are very long stretches when it was just us, the bikes, and nature.  Serene!

They do slow you down more than you might expect.  I can usually keep around 30km/h on the road bike solo over a long ride, but we averaged just 22km/h.  We weren't hammering it, but I honestly don't think we'd have gone that much faster - the trails are sometimes a bit soft and it really slows things down.  Not to mention mountain bikes aren't that fast to begin with!

I'd say the Blackwater up to Woodville part was probably the most interesting, followed by Uxbridge to Blackwater.  The Blackwater-Lindsay stretch was better than expected but nothing too exciting.

Finally if you like rail trails I would highly recommend the Victoria Rail Trail, especially starting up in Fenlon Falls and heading to Kinmount - that is even better IMO!  And if I ever get the time I really want to follow it up to Haliburton.  Next adventure, maybe.

Posted by jonovision_man at 5:24 PM No comments:

Cycling - Headwind in Every Direction! Here's why.


I came up with the simple explanation. 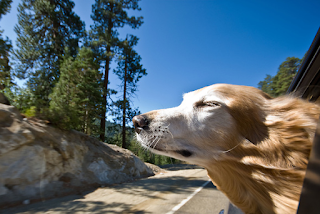 Stick your head out of the window next time you're driving on the highway.  That 100km/h (60 mph?) gust you feel is not really wind, but you moving through the air at 100km/h.

And that is why you feel a headwind on the bike.


If the air is completely still and you are moving 30km/h through it - the amount of air hitting you is exactly what it would be if you were standing around in a 30km/h wind!

The only way you'll feel like there isn't a headwind?  If the air is moving faster than you in the direction you are moving.

So really, next time you feel the headwind where you don't think it should be, just remember it's your reward for going so darn fast.  Congrats!


Posted by jonovision_man at 5:43 PM No comments: