I have noticed two things about alcohol as I have been watching calories:

#1 - Alcohol has a lot of calories


Imagine my surprised to find that there was a study that showed that women who drink tend to be thinner, and have lower rates of obesity!

The only explanation I can think of is that it's actually the opposite - women who are thinner are more likely to have drinks bought for them!  Maybe?

Ultimately, the only sure way to lose weight is to count the calories going in and make sure they're less than the ones going out.  If the other tricks worked, we'd all be skinny by now... and if drinking worked I'd be VERY skinny!

Posted by jonovision_man at 9:38 AM 3 comments:


This was a relatively small community race.  No chip timing, so used my Garmin for my time.  Course was hillier than I remembered - usually it's part of my LSDs, much more challenging when you're trying to push the pace.

I was sick all week, didn't feel great today either... between that and my lack of training to this point this season, my expectations were low (and I'm tipping the scales at almost 185lb, which is about 15 pounds more than where I want to be!  Need to get back to 100% so I can train off some calories!).

Course was a double out-and-back (ie. the same out-and-back twice).  The only positive about that is you get to see where you are relative to the leaders (and chasers!) several times.  I started out a bit quick, then backed off before the 1km mark to let a few people pass me and get back to my target pace (4:30/km).  Hit the first out-and-back (2.5km mark) in about 10th overall, passed a few people on the way back, then from the halfway point on was by myself.

Had trouble keeping to the 4:30/km pace in the second half, especially on some of the hills.  That was discouraging, I thought I could at least keep that!

Finished in 43:45, lost track of where this put me overall but I think it was like 6th or 7th.  Would have been at least in the ballpark of last year's PB, but the course was 9.5km per my Garmin... so my pace was actually slower than even my 1/2 marathon PB.  Pretty much confirmed what I already knew, that I'm nowhere close to where I was last year and have some work to do.


Posted by jonovision_man at 3:05 PM No comments:

This one looks like a pretty small local race.  There are a bunch of these in Whitby for some reason, which is pretty convenient for me!

Course: The course is almost certainly going to be the waterfront trail in Whitby, possibly going as far as Oshawa for the 10k.  If so, it's a bit hilly (and there's one big hill on the way back!), and the trails aren't especially wide... but being a small race it's probably not going to be an issue.


Goal: get my competitive juices flowing again!  No hope of a PB, so just going to go out and give 'er stink, see how things shake out.  I've been fighting a cold this week so nowhere near 100%, and my training has been all over the place... so zippo expectations.

Posted by jonovision_man at 9:24 AM No comments:

2012 Goals: The Year of Off-Road Multisport 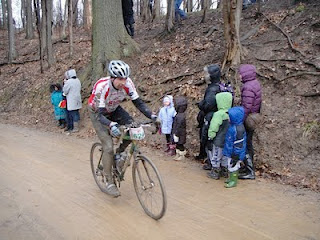 I'm finally over my injury so I can look forward to the 2012 season at last!

2011 Goal #3: Not suck at cyclocross.  Achieved!  I did another cyclocross race and did some pretty slick dismounts and mounts.  My power is way up over the short distance stuff.  Still a bit of work to do, but I'm way better than 2010.

The first two are re-runs.

#3 is new - I want to rock out some off-road races.  I'm doing an off-road triathlon, the Moraine Adventure Relay (we have a great team!) and Logs Rocks and Steel Adventure Race.  I really want to do well, I think we have the pieces and should be able to put it all together for some really strong results!  I really want to see us be podium or better at the Moraine race and be in the top 20% of Logs Rocks & Steel.