My 8th P2A ended in a DNF due to mechanical.  Spoiler alert!

After a week of soggy chilly weather, we actually ended up with a pretty nice day.  Single digit temperatures (Celsius) but sunny and the wind was coming from the West (ie. from Paris to Ancaster)!.

I expected the conditions to be attrocious... the organizers were cutting out sections, and after last year I could only imagine the absolute worst.

I felt pretty OK at the start, but not enough to really push.  I picked up some good wheels for most of the long opening rail trail, tried not to lead whenever possible.

They had cut out one of the first single-track sections - usually it's the first real test of the leg with a few steep short climbs. Can't say I missed it that much!

We crossed the first major road and into a section that goes through what is little more than a ditch. This was the first sign of mud, and it was pretty bad, but not as bad as last year. Last year I'd walked almost all of it, this year I rode most of it. Also felt pretty good riding past others walking... having an extra low gear helped there, my wheel spin was dramatically improved (even though my tires were pretty bald).
After leaving that we hit the road, and I was still feeling pretty good!
New section followed around an apple orchard. Mostly gravelled road, a bit of mud and a little hill on the back end. Nice addition!
Back on the road, grabbed a few wheels here and there, but with the tail wind it wasn't as critical. Still felt pretty strong.
Next up was the muddy rail trail, which again was entirely rideable compared to last year. So despite the fears of mud, it wasn't actually that bad...
After that, back on the road... and I found myself alone going into a headwind. There was a group quite for ahead of me and another quite far behind, just couldn't link up with either. After awhile a few riders caught me, but they were moving a bit too quick for me to hold on... not a great part of my day!
Passed halfway feeling pretty OK.  Pretty much where I had expected to be.

Another rail trail followed, no issues, straight-forward.  But just as I left it and hit the road again, I heard a rather loud clunk from my bike - not sure what caused it, and everything felt OK after, so didn't give it much thought.

Final challenge of my day was the horse field... it was squishy and barely rideable.  Had to walk a few parts.  I don't remember what it was like last year, but it was brutal today, zapped any energy.

Shortly after this, after a brief stint on the road, I was on a muddy farm lane when boom, my rear derailleur hanger snapped.

This has happened to me previously on my mountain bike, so I thought I might have a spare.  Frantically looked through my saddle bag, nothing.

Tried "Plan B" which is to turn the bike into a single-speed - by-pass the rear derailleur and shorten the chain.  Not exactly what you want at P2A, but could get me to the finish.

Unfortunately my chain was badly bent, presumably what caused the failure in the first place.  I had one SRAM powerlink, but to remove the section with the bad link would require two, and I didn't have them.  Also didn't have a chain tool - a guy who had suffered the same fate stopped to try help, but it was clear I was cooked.

(I later learned you can re-use a pin in a pinch... might have worked!)

Walked back to a very nice volunteer, who was very helpful in keeping me warm but had no phone or anything to contact the race organizers.

Surreal moment - she gave me her race volunteer shirt when she went off to talk to a local farmer to get him to keep me warm in his truck!  So there I was in a volunteer shirt directing cyclists - certainly not how I had envisioned spending my day.  I'm happy to report that the participants are extremely nice to volunteers, many thanked me for my time (which was only inadvertently donated).

Found my way back to another checkpoint, where I met a local HAM radio operator who was also donating his time.  He radio'd organizers, organized a pick-up, and after freezing my butt off for the better part of an hour I finally found myself in a van on the way to the finish.

Haven't had much opportunity to meet the volunteers at this race, as usually I'm preoccupied with racing... I have a whole new appreciation for them, lots of smiles and generosity.

Well, I have a chain and rear derrailleur to fix... but now I have to get back to focusing on the Toronto Marathon in 3 weeks.  Next year I'll be back and ready to rock.

Posted by jonovision_man at 11:39 AM No comments: 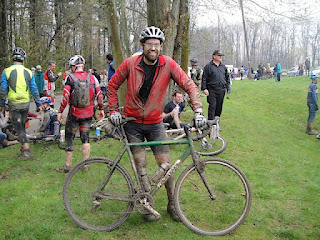 
Very interesting results in my training.

I've been following the Furman FIRST plan, which is big on prescribing paces for all your workouts.  So instead of doing all LSDs at the same pace, they increase the speed as the weeks wear on.

This is from my Garmin data, for the three 32km LSDs in the program (last one was today!)


Quite a fluke that they all happened to be exactly 154bpm, but that suggests a very good improvement in fitness.  The same heart rate is sustaining faster and faster paces, suggesting my heart is gaining efficiency as the training is progressing.

Now my one deviation from the plan - instead of a 3 week taper, I'm taking 4 weeks and doing Paris to Ancaster bike race next week... I'll still be doing three runs, but LSD will be pulled back from 32km this week to 24km @ 5:14/km.  Then I'm back on plan for the last 3 week taper.

Hopefully it all works out!  I'm pretty excited by what I'm seeing so far, and I've felt great.
Posted by jonovision_man at 7:11 PM No comments: