The Ups
My first marathon ever - The Toronto Marathon - was my proudest moment so far as an amateur athlete. It was just such an amazing event, and to be able to beat my goal time of 4:00:00 was icing on the cake. I never thought I would be skinny and athletic enough to finish a marathon, and there I was, skinny and atheletic... I usually roll my eyes at the medals and such, but this one meant a lot to me.

My first triathlon ever - Binbrook Try-a-Tri - was a close second. I was happy to have gone from struggling to complete a 25m length in January to finishing a 400m lake swim. By August, I had improved a bunch for the Orillia Sprint Tri, and felt like a "real" triathlete. I can't wait to take triathlons to the next level next year!

My first running trophy ever - I was part of a team that ran a 5K and to our surprise actually won the thing! Sure, small race, but I've never won anything running and probably won't win again... so I'll take it! :)

One last highlight I'd like to mention was the two rides I did with my daughters (on the trail-behind bike). I did the 50K Ride for Heart with Meghan (5 years old at the time) and the 25k Tour de Greenbelt with Kacey (4 years old). They made their daddy incredibly proud, rode like real champs!
The Downs
ITBS pain sidelined me in the winter and early spring... it was a tough struggle just to get back to running. Finally after weeks of physio, I went to a podiatrist and he identified my overpronation as a likely cause. When I finally got the orthotics, it was hard to be patient and slowly build up the mileage... I did it, though, and the knee held up all year, I think it's finally resolved.

The guy who hit me with his truck while I was biking got a measly $40 fine, while I have permanently bent pinky fingers... oh well.
The Future

I've signed up for Ironman Canada for August 2009... as you've probably noticed, it's in the title of my blog, so obviously it's a big goal for me! It should be another challenging exciting year of firsts, I can't wait.

It's been a thrilling ride so far, and I've had fun documenting the ups and downs on this blog! I hope it was as enjoyable and informative to you as it's been for me.

Posted by jonovision_man at 9:48 AM 2 comments:

So my swim instructor tell us last week:

"Wear pajamas over your swimsuit next week, the flannel kind!"

I borrowed the manliest looking flannel PJs I could from my wife (at least they were blue!) and headed to the pool...

Coach says "get in the pool!"... and he was serious! So all of us tri geeks in our flannel PJs jump in the pool (after a quick photo op).

It was ridiculously tough... they soak up so much water, it was hard to stay afloat, and the drag made doing 100m a real chore!

After about 10 minutes he let us take off the bottoms (with swimsuits on underneath, of course). Even with just the tops it was no picnic, but at least the legs stayed up a little better!

Oh, and then they turned on the waterslide for us, and all us tri geeks in the fancy TYR/Speedo suits and goggles trudged up the stairs to take their turns on the slide...

Weirdest swim practice I've been to so far... not sure how he'll top it next session!

My instructor's blog entry about it, with picture!

I've been religiously (so to speak) tracking my calories for the last few weeks, trying to lose those last few pounds.

I'm down to 177 now. I was hoping to get down into the 160's by Christmas, but the weight just isn't coming off as fast as it once did. The less you weigh, the fewer calories you need, so the less you have to eat. It's become difficult to get those big caloric deficits that nail off 2 pounds a week... I'm closer to 1/2 pound a week, very gradual.

You only live once... whatever I tack on in a week of holiday celebration I can drop easily enough in January when I enter the Base period of my training.

No rushing off to work or making lunches, perfect time to get in those work-outs.

I'm still in the "Preparation" phase, so the focus will continue to be on swimming skill primarily, while maintaining the running and biking. Oh, and just down the street from my parent's place is an Olympic size swimming pool, with all-day lane swim!!! How do you spell FRICKIN' AWESOME!?

Have a Happy Holidays!
Posted by jonovision_man at 2:33 PM No comments:

The best-laid plans of mice and triathletes...

My intention during my Preparation Period was to swim 5 times per week, bike and run twice. I even decided on what the typical week would look like, and made a pretty chart.

Life had other plans... I've been hit with a chest cold, again. What a frustrating few months! At least it's not a critical period in my training.

Last week was great, though, I stuck to the plan 100%. The swimming is coming along great, I've been following the drills in the Total Immersion book. This week's breakthrough was dropping my lead hand down to 4 o'clock (or 4:30). I sort-of knew to do this, but didn't make the connection that this would help my balance. Amazingly, it did, my feet came right up, much improved.

The other goal during this period was to get my bike set-up figured out. With the addition of the new saddle and seatpost, that's improved significantly. I'm going to tweak it a little, but it feels so good right now I don't want to mess with it too much.

Revised plan is simply to recover from this cold, and when my lungs clear out, get back at it. Gotta roll with the punches.
Posted by jonovision_man at 8:59 PM 5 comments:

My Franken-bike: Trek 1200 for Triathlons 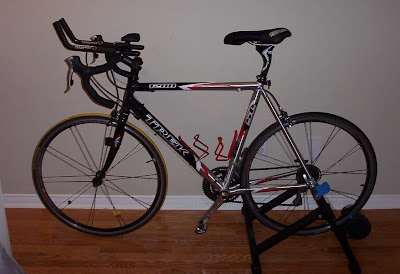 I bought a Trek 1200 a couple of years ago. It's an entry-level road bike, my first. I remember the first time I rode it... it seemed scary fast, and the smallest bump or gust of wind put me wildly out of balance.

Turns out, it's not fast enough!

In non-drafting events (ie. most triathlons) you can get more speed/efficiency by simply adding clip-on aero bars to your road bike.

Bought a set of aero bars and added them to my bike. And I will say, it instantly felt faster - when I went down to the aero bars I could pop it up a gear or two with the same effort, especially into a headwind.

But it certainly wasn't comfortable... I was stretched way out, and bent over causing some *ahem* discomfort in the *ahem* seat area....


(Plug: biketiresdirect.com seemed to have the best prices of the companies willing to ship to Canada... good shipping cost too, I bought from them twice with good results both times)

I went out in search of a new seat, and the good people at trifuel had an extra piece of advice: get a forward seat post.

They both went on the bike at the same time, and WOW, what a difference. I still need to tinker with the set-up, but right off the bat I found myself right over the aerobars, not reaching at all. The seat is far more comfortable than my old one, it should be perfect for hours and hours in the saddle.

The only thing that stinks is that my bike is no longer all that comfortable riding on the brake hoods... but that's OK, that's not a priority. I want to be comfortable staying in the aerobars all the time.

Shhh... don't tell my wife... when I got my road bike, I went with the Shimano SPD system that I already had on my mountain bike, so I could use the same shoes. They're fine, but... anyway, that's not an immediate priority! But on my to-do list.

Definitely don't tell my wife!!! Eventually I want to upgrade to a "real" tri bike... probably carbon, certainly expensive... and definitely not this year.
Posted by jonovision_man at 5:32 PM 8 comments: