I'm still having some knee trouble...

It was bothering me while biking at first, but that has subsided.  I was out for 2.5 hours yesterday without much trouble from the knee (a whisper at the end, but other than that OK).

I should get it looked at... but since it's been going in the right directly (ie. getting better) I have put that off.  I'm reasonably confident that my tight hamstrings are still at the root of the problem, so I'm working on that a lot.  At this point it's the end of the season so I can afford to be a bit patient with it.

Top Posts From This Blog

I'm a bit surprised at just how many hits my little old blog gets... over 36,000 since inception.


Top blog posts from this blog (based on traffic):


Kind of a funny mix of topics, no real connection between them other than they probably do well as Google search terms!

I try my best to make the blog interesting to people who stumble on it.  I know most people don't really care about how many miles I ran on any given week or what I had for dinner, so I try to speak more generally in the hopes someone learn something from either what I did right - or (more often) wrong!

It also serves as a bit of a diary for myself, so I can keep fresh the memory of various events and experiences.

See, now I'm just being narcissistic again... very easy trap to fall into in a blog post, enjoying hearing the sound of your own voice.  I'll shut up now.
Posted by jonovision_man at 9:58 AM 1 comment:

With the NYC marathon in the books, I'm officially in "off-season" mode.

My knee is still out of commission after the damage I did during the marathon... I pushed through the pain for over 10km, which did some pretty good damage.  It's getting better every day, but it will be a few days before I can bike or run.

6 days so far without any biking or running... I'm going insane.  It's such a big part of my life, it feels weird to not be doing it.  I'm going to go for a swim today just to get myself feeling active again.

Next weekend there is a 10 miler in Whitby, if I can get in a run or two next week I might do it.  I won't be racing it by any stretch, but as long as I'm not hobbling I might go for it... or go mountain biking instead!  Probably the latter.

The rest of November and December are going to be goofing around months. No training goals, just keeping active doing whatever feels fun.  I'll keep up a 15km long run every couple weeks, do some mountain biking, trail running, whatever I feel like!

So much to look forward to, I can hardly contain my excitement!  Paris to Ancaster, Whitby 1/2, Moraine Adventure Relay, then Adventure Racing in July/August/September, maybe another off-road duathlon/X-terra... who knows! 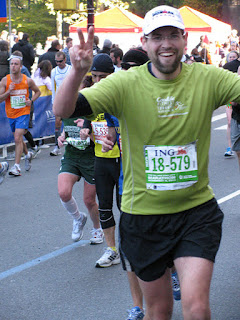 Incredible experience... I don't know how I could ever top that at a marathon, it was just so overwhelmingly awesome!  The crowds lining every street cheering (roaring!), the immense and awesome city of New York, amazing.  Worth the 4 year wait!

The downside - my time was way off expectations due to an issue with my knee.  Really disappointing, I trained and trained and my pacing seemed to be going so well.

Things I Learned That Might Be Useful To Others

I was in wave 1, somewhere in the middle of the pack.  I took it pretty easy in the first mile as it's a fairly steep incline.

Other than the fact we were running in Brooklyn, there wasn't much to my early race - everything went as planned.  I ate my gels, drank the occasional Gatorade, and held a very easy-feeling pace (about 5:10/km).  Things were looking good.

One funny moment - a group of Hasidic Jews ran across the road in front of me.  Quite the contrast, us in our little shorts and tight lycra, them with their traditional hats and hair things.

I got jostled now and then by other runners, seemed hard to avoid in the crowds.  It wasn't a huge problem mostly, I always seemed to be able to go my pace and find room when I needed it.

Then we hit the climb on the Queensboro bridge, and my first twinge hit... hamstring started to feel sore and tight, followed by knee pain.  Not good!  This wasn't an unfamiliar pain to me, it was much like the ITBS I suffered with a few years ago, and every so often I've had some soreness... but why now?

It switched to downhill and the pain seemed to subside somewhat, I figured I could probably run through it.

When we emerged from the bridge, it was to the thunderous roar of a huge crowd!  It gave me goosebumps... several times actually!  The entire way up First Ave was just amazing, so many people cheering. I started to feel a bit of fatigue, and the knee pain was just there - didn't get worse.

... until we hit the next climb on the bridge over to the Bronx.  The pain got really bad.  I managed to keep my pace a bit longer just hoping it would go away, but then it started really impacting my gait and I just couldn't hold it.  I tried to back off to a 5:30/km, but even that became impossible.  From there on it was a death-limp-march to the end, and it was miserable... I scanned the crowds for my family, not wanting to embarrass myself by walking up to them was the only thing that kept me going!  My pace was awful.

I finally saw them at 25.5 miles - it was awesome!  I ran over and kissed my wife and girls, since my time was way over anyway it no longer mattered.  Lurched to the end in 3:55.

After the finish line they make you walk another 4-5 blocks for some inexplicable reason... seemed to mostly have to do with bag check, but having not checked a bag this was a real irritation.

Got home, went to check my time - didn't get picked up at all!  Not a single time split the entire race.  Hopefully they have the info and it was a glitch, although really it doesn't matter that much... it was bad.

Even before this race, I had it in my head this would be my last one for awhile.  Next year I'd like to spend my fall with other things, probably more adventure racing and trail running.  The marathon is a big investment of time, and when it doesn't go right it's pretty tough to take.  Still, this experience will stick with me a long time, it was amazing... the lure of the marathon will get me back someday I'm sure.

Posted by jonovision_man at 9:23 PM 4 comments: