I had a slow start this year, probably my slowest start in about 5 years.  Most of that was with the late start following an injury at NYC marathon, followed closely by a trip back home.

Not to mention the extra 10+ pounds I'm carrying around over last year!  Ouch.

Biggest lesson I have learned previously: don't do too much too soon when coming back.  I'm healthy and feeling good, so the temptation is to kill every ride and run, hammer out some big miles.  The increases have to be gradual or I'll end up injured again.

My approach: log lots of miles on the bike, do run training that counts.  Start adding hills/tempos on the runs, but keep my overall mileage conservative, making up the endurance on the bike.  I've had luck with bike readiness carrying over to the running endurance over shorter distances (1/2 marathon and less) and it tends to be less injury-inducing.

Posted by jonovision_man at 9:32 AM No comments: 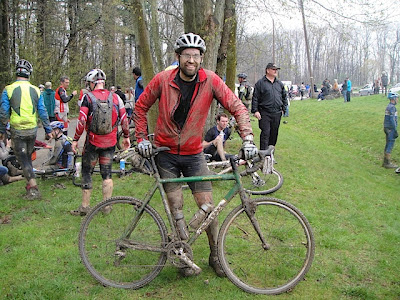 Oh sure, it's been +25C already (once), but spring doesn't officially start until Paris to Ancaster is done and dusted.

What is P2A?  It's an off-road and on-road mixed up crazy race.  There's asphalt roads, gravel, singletrack, and crazy mud - all in one 60km race.  I love it!

This will be my 7th in a row - and so far, no two have been the same.  One year I got a sunburn, it was about 20C.  Last year it snowed!  There have been dry years, but then last year was the nastiest muddiest slog it's ever been.  A few years ago we had a brutal headwind the entire race... you just never quite know what it will throw at you.

As those who follow this blog (why???) will already know, I was injured for much of the off-season and only got back to running/biking around a month ago... so my base isn't what it should be.  Worse, I spent the last week back home with family, eating lots and not exercising much at all (no biking for over a week!).  So I'm about as unprepared as I've ever been (other than maybe year 1).

The good news: it's supposed to rain Saturday, race is on Sunday, so should be muddy.  For some reason that makes me feel better.  Maybe I'm just hoping those that don't know what they're in for will be a little extra screwed and I can do OK!

The bad news: I've cramped up on the final climb at this race almost every year to some degree.  Last year it wasn't too bad, I was able to spin through it and get up that final climb somehow.  This year I'm probably going to be cooked... but whatever, I'll give 'er and see how it goes!

The other good news:  IT'S PARIS TO FREAKIN' ANCASTER!  I don't care how miserable it makes me, I looooove it.


Posted by jonovision_man at 7:20 PM No comments: