Ever since I heard about cyclocross bikes, I wanted one!

Cyclocross is an odd bird in the cycling world. The races take place in the fall (in North America, later in Europe), and consist of several laps around a marked course. There are usually man-made obstacles requiring you to pop on and off your bike and tight turns to test your bike handling skills. 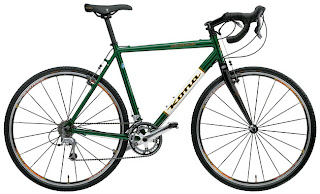 The Kona Jake the Snake. I'm really excited, can't wait to get on it and put it through it's paces!

It's basically a hefty road bikes. Wider tires, slightly wider handlebars for control, geometry a bit more suited toward handling rather than optimal aero position, and gearing focused more toward quick starts and stops rather than pushing big gears.

What I Will Do With This Bike

Posted by jonovision_man at 8:58 AM 2 comments:

Challenging. If you're just trying to cross 160km off your list, this isn't the ride for you (unless you're an awesome climber!). But if you've done it and are looking for a great challenge? Go for it! It's pretty wicked.

I'm not much of a climber, so this one was very tough. Lots of 10%+ grade hills, some very long (the highlight being the 12% "Heartbreak Hill"). It smacked me around, even with the triple chainring.

I decided to make this a 200km instead of 160km, not realizing just how challenging the course was. I did it, but it wasn't easy!

The first 50km went by pretty fast - I was mostly riding in larger packs. At first it was about 50 people, but by the rest stop I was down to a group of about 6. We had dropped a bunch on the rollers - I don't know what it is about these things but it seems like few people know how to carry downhill momentum onto the next uphill very well.

That's about where the fun ended for me, as from there on there were a lot of steep hills, and I just couldn't keep up. It was my turn to be dropped, and from there on I was mostly by myself, picking up the odd small group here and there.

At 80km (120km for me!) disaster... I missed the rest stop. They had signs for the 100km and 160km course diversions, but I didn't realize that was also the rest stop. I should have read the map better, or listened to the volunteer who I couldn't quite hear due to blowing by too fast... by the time I realized it I was 5km up the road with 3 nearly empty bottles and 25 brutally hilly hot kilometers to the next water.

Worse still? The huge hill challenge was on this stretch, Heartbreak Hill.

I suffered, barely limping into the water station, only to find that it was just that - a water station. No Gatorade, no food, just water. Ack! 15km to calories. So all told, I did about 40km of the hottest and hilliest part of the course without consuming a calorie. The only saving grace was that I had Nuun tablets with me, so at least my electrolytes were replenished.

By the time I got to the food stop, my heart rate was way down and I was just turning the pedals with nothing to give. I scarfed down as much as my stomach would take - 2 bananas, 2 granola bars, a bunch of Gatorade, some orange slices - and didn't puke! Awesome. Filled my bottles, and got back out there.

The last 30km were mercifully quite a bit easier, a few hills but nothing compared to the rest of the course. I found myself getting stronger as my body absorbed the much-needed fuel, and finished strong with a smile on my face.

I'm happy to cross this one off my list. I can't see myself doing more than 200km in a single day, but multi-day rides are possible (ie. the Tour for Kids, 2 or 4 days of 200km/day). Ultimately I wasn't quite well enough trained to do this course justice and mucking up the nutrition made it hurt! Live and learn.
Posted by jonovision_man at 5:29 PM 4 comments:

I have not done this event before, but it looks like a typical supported century ride. Unique features include a hill climbing challenge (chip timed, 12% grade, whoooah nelly!).

I have done 160km before a few times, twice in organized century rides and twice on my own while training for Ironman. I also did 180km as part of Ironman, with two mountain climbs en route... so as a friend of mine correctly pointed out, the next logical distance is 200km!

I plan to ride a 35km route from my house to the start, register, then do an additional 5km before the official start. That will give me 200km for the day and a new personal longest ride distance (with the help of some serious drafting, I hope!)
Posted by jonovision_man at 9:34 AM No comments:

I had a great time, though, a bunch of my friends were there including two doing their first-ever races. All met or beat their goals, lunch and a T-shirt were included, lots of prizes, all for $10! Best deal in town.

Conditions weren't great, the rain mostly stayed away during the race but the air was thick with humidity.

I would have been better pacing to a 4:10-4:15/km at the start and hopefully speeding up, but that would mean conceding that I couldn't run sub-20. Someday I'll get it!

My experiment with Tylenol was a bust, I felt just as much pain as the last 5k and my pacing was almost identical. Fail.

Unfortunately this is the last year for this race, they are retiring it. Kudos to the organizers, it's been fantastic for years and I've appreciated all their hard work to pull off such a nice race.

Get out of bed, hit the scale, write down the number.

This has been my routine for a few years now.

One thing I have learned is not to trust a one-day number.

This last week is a great example, from Friday to today:

So what is going on? A lot of things... that 181.6 number is artificially high because the day before was my anniversary and we ate (and drank) without restraint.

The 174.8 number is artificially low because I did my 30k run yesterday at night, then went to bed without eating all that much. I depleted my glycogen stores, which hold a lot of water weight, and then went to sleep. The result - instant pretend weight loss! I should patent this... "Lose 7 pounds in 5 days!"

The bottom line is that the number on the scale is just one piece of information to help track your health. There needs to be some context to make it meaningful, otherwise it's easy to jump to wrong conclusions.
Posted by jonovision_man at 8:28 AM 1 comment:

I've done little since to really improve my 5k pace, as I'm focusing mostly on longer stuff leading up to the Muskoka 70.3 and a fall marathon. You never can tell, though, if conditions are perfect and I feel really good, it could be there for me.

I successfully rode 211.6km in 2 days as planned. It was surprisingly easy!

The Tour de France is really what inspired me to try it - the guys go hard one day, then get back on their bike and do it all again the next. I had never ridden long two days in a row, so figured I would see what it was like.

The keys to going back-to-back:
My legs were a big sluggish getting going this morning, but within a few kilometers they loosened up. By the last hour, fatigue had settled in and I was struggling a bit for pace, but nothing too serious.

All in all, a success!

Next up, century ride. This will be my 5th 160km (6th if you include the 180k ride at Ironman!), so looking forward to tackling the big distance again.
Posted by jonovision_man at 12:59 PM 2 comments: