Spring is in the air, which means it's time for yet another Paris to Ancaster!
What is it
A 60km race across the Ontario countryside. Roads, rail trail, off-road, mud, fields, you name it this race has got it!
It used to be considered a mountain bike race, but clearly the perfect tool for the job is a cyclocross bike. I just bought one in the fall, so after five previous attempts all on my old hyrid, I can finally do this race justice.
It's hard to really compare times at a race like this, there are too many variables - namely weather and course conditions.
But here we go anyway:
2006 3:54:44 (970/1096)
2007 2:56:21 (632/1136)
2008 2:48:07 (513/1064)
2009 2:50:34 (429/1202)
2010 2:36:12 (463/1272)
That first year was a gong show - I had the wrong tires, the wrong idea about what the course would be like, the wrong clothes... I was just in way over my head! Miserable.
But every year I've learned a thing or two, now I feel very prepared for the challenge.
Cramping
I've had cramping the last few years on the last climb, and it's driven me to madness. This year I've focused more on burst intervals (tempo riding punctuated by bursts at 100% effort) to simulate the lactic acid build-up. I'm going to go nuts with electrolytes to make sure that's not the cause... and I biked through the winter outdoors, getting out almost every weekend (in addition to indoor training sessions!).
I've basically done everything possible to not have cramping... if I still have them, I give up.
Posted by jonovision_man at 8:16 PM 5 comments:

I had a rather unpleasant interaction with a motorist today.
I was running, he was traveling in the opposite direction. This was a country road, so no sidewalks, I was on the road. As he passed, he came uncomfortably close, despite having the entire other side of the road available to him... I threw up my hands and yelled "woaaah!" mostly in surprise. He honked, stopped a little up the road, but then drove on...
... but 10 minutes later, he returned in the opposite direction!
Yikes.
He drove along side me, cussed me out for being "in the middle of the road" (I wasn't), threatened to "thrash" me, then finally took off. The piece de resistance? He had a child in the back seat!
Sigh.
This is actually quite rare... I've logged thousands and thousands of kilometers of running and cycling, and there's really only a handful of incidents like this. 99% give you lots of room, slow down, and are generally courteous and safety-conscious.
But there will always be a small minority who seemed to be offended by your very presence... not much you can do about it, except what I did - take down the license plate and report them. I'll be surprised if anything comes out of it, but maybe a phone call from the police will be enough of a wake-up for this guy.
Keep your head up!
Posted by jonovision_man at 7:22 PM No comments:

5k in downtown Toronto. Big race with lots of goodies... technical shirt, a pair of gloves, and beer and chili at the finish! Not bad.
Race Web Site
My Race
First, a big peeve of mine... why do people who are slow (or even walking) insist on being right up at the front for the start!? It's a chip timed race, if you're not going to be finishing in at least sub 25, you shouldn't be rubbing elbows with the guy in the singlet that weighs 110 pounds soaking wet. I had to seed myself further to the front than I maybe should have been just to be in front of some people who clearly weren't going to be fast... grumble!
Anyway.
At the start line, they announce that the course is short due to construction, so I'm already a bit cheesed... in the end it probably wasn't short by more than 50m, if that, but it put me in the mindset that this one wouldn't really count.  (Update - per the organizer, it was actually perfect, they moved the start line back to account for the other change!  So it counts!)
I started well, kept my pace within myself. It starts downhill, then immediately has a noticeable uphill, so I just kept things even and close to target pace. As expected, my Garmin lost its mind once we got into the tall buildings - but there were no kilometer markers! I had no idea what my pace was, I felt OK but just had to hope I was still on pace.
At the turn-around I was at 10:10... so sub-20 was looking like a tough task.
I tried to pick up the pace a bit, and thought I had done so for a bit. Still, it was tough to tell, Garmin was hosed and no kilometer markers, I was just running with what I had and hoping it was good enough.
Somewhere near the end I looked at the Garmin again and the distance said 4.5km, and almost exactly 18:00... if that were actually accurate, I only needed to hold 4:00/km pace to the end and I'd have my sub-20!
I tried my hardest to get a finishing kick going, but by this point the fatigue had really built up, and the finish is on an uphill... I realized pretty far from the line that I had further to go than I figured, and once the clock hit 20:00 I knew it was gone. I trudged to the line for a 20:30.
In the end, Garmin showed 5.15km... I think it's wrong though, it went crazy a few times.
Drank my beer, ate my chili, drank another smaller beer and headed for home.
Result:
20:30 (chip), 70th/1546 overall, 27/219 M30-39
It's a personal best, but still 30 seconds off my goal... I just don't seem to have the mustard to find that little extra for sub-20. I thought being a bit lighter and doing much more speedwork (intervals especially) would have really helped, but I'm only marginally faster than last year at best.
So back to the drawing board, need to figure out what training I can do to find 30 seconds! It might just take the right day when everything goes perfect from the time I wake up... but I will get there! It's just 30 seconds, that's just one commercial.
Posted by jonovision_man at 1:02 PM 9 comments:

BMI is used to determine whether someone is in the right weight range for their height.

Everyone's body composition is different, but it's going to be in the ballpark. And no, your bones aren't that much denser than everyone else's!

Posted by jonovision_man at 4:36 PM 3 comments:

This year I've been doing intervals every week, a tempo run, and a long run. The intervals have helped tremendously, I feel comfortable running 4:00/km now. But... I did a test run last week at the track to see if I could hold 4:00/km pace for 5k. I got to about 3.5k and couldn't hold it any longer. This pretty closely mimics my experience at my last 5k race:

Still, I'm going to go for it, and I'll either do it or blow up trying. It's just a 5k, so I'll get another shot at it before the year is out if I need it.

I've read too much about 5k pacing, it's making my head spin. A study said going "6% faster than even pace on the 1st mile" is the best strategy, based on some college runners... but they finish a 5k a lot faster than me, so not sure this applies! It also mirrors my strategy above that did not work out well at all... 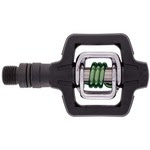 I have used one road bike system (Shimano SPD-SL) and two mountain bike systems: Shimano's SPD and now Crank Brothers Candy X.
Verdict: Crank Brothers rock!
I've been reading about "egg beaters" for years, especially for cyclocross where mud clearing is a big deal. So when I saw the Candy X pedals on clearance for $30 at MEC, I figured I had nothing to lose.
Clicking in is very easy. Unlike the SPD, you don't even have to really line your cleat up with the pedal, you just slide your foot forward until it clicks in. You can click in from 4 sides, so it's never in the wrong position. Also, having the platform is a big plus - if you miss, you can still get a decent pedal stroke while you correct yourself. I found the SPDs are much less forgiving.
Despite being easy to click in and out of, the pedal feels remarkably firm once you're in. I didn't notice any shifting around, it is just solid.
Downsides:
I haven't yet tested the legendary mud clearing ability - that will come at Paris to Ancaster in a few weeks. But just visually you can see how mud would slide right through without causing trouble.
4/5 stars.
Posted by jonovision_man at 8:09 AM No comments: