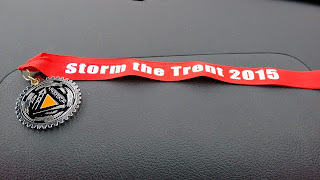 The format is quite a bit different from anything we've done before.

Mostly we've done triathlon-style races, where you canoe, then mountain bike, then run, all on a marked course.

This race you knew there would be canoe'ing, mountain biking and running - but ahead of time we didn't know what order or what the course would be like.

The surprise was that despite the race website suggesting there was very little orienteering... there was actually a fair bit in the running sections!  Probably nothing compared to "real" adventure racing (mostly there were trails that could be followed), but for us it was a whole new challenge.

We had heard horror stories about people in long lines waiting to punch in at the first checkpoint, so we were really ready to let fly at the start to avoid that fate.

The map showed a small connector trail that would take us to the trail we wanted to be on, eventually leading to the checkpoint.

Great.  We found the small connector trail ... which lead nowhere.  It didn't go up the hill we needed to, and it wasn't much of a trail... so we bushwacked up a hill, which seemed to be great when we found a trail at the top of the hill.  I thought we were on our target trail... nope, we ended up back at the road  we'd started on!!!  Slightly closer to our destination.

We ran along the road, bush-wacked some more, and finally found the checkpoint... and a line of about 50 people waiting to check in.

Horrible.  Couldn't have been a worse start.  We were behind everyone (or at least it felt like it) - even the walkers.  Looking back it cost us over 5 minutes, which at the time felt like a lifetime.

The other 3 checkpoints went perfect - we took direct routes, not following others on wild goose chases... but we were too fast, by this time my heart rate was way way way up there.  Did I mention it was humid and about 30 degrees?  I was baking and in the red, big-time.

This was all road, starting with a huge hill.

I don't hate hills - but already being in the red and overheating this just cooked me that much further.  I had to ask for my team-mate to slow down (something I would repeat throughout the bike, sadly!).

After the hill life got better - finally some fast sections where I could get some air and cool down, find a steady pace.

Then we pulled off toward Run #2, but first we had a long rocky climb ... once again I was into the red and overheating!  This would be the story of most of my race.

We nailed this one.  We weren't running as fast at this point, more of a light jog, but we purposefully went almost directly to every checkpoint.  I don't think we could have followed a more direct route - the exact plan we had cooked up before the race for this section is what we executed.

At this point we had no idea where we were in the race.  People were doing checkpoints in random order, you'd pass people but then they'd go another way, it was pandemonium!

This one started out on the road, which was great.  Soon after it turned into a smaller private road, which eventually devolved into an ATV trail at best.  Really deep water/mud pits in a few small sections, but other than that very rideable.  Hilly and bumpy, but nothing technical or serious.

After that back on roads.  By this point we were both hurting.  It's hard to deal with searing heat in May - all the training you get in Ontario before May is in single-digit Celcius kind of temperatures!  Just not acclimated to this kind of heat, really took its toll.

We arrived at the bike drop to a total shock - there were almost no bikes there.  Somehow, despite our catastrophic start, we were one of the top teams out there.

I actually asked the race organizer who was standing there "where are all the bikes?"... I was in a bit of disbelief.

Two theories:
1)  Navigation was harder than we expected, but after our first snafu we nailed it.  Maybe others didn't nail it
2)  The heat that made us feel like we weren't doing great impacted everyone ...

When full splits are posted it'll be a little more apparent where we made up time on other teams, but at the time it was just a really nice shot in the arm.

The canoe is really our strength.  I get the impression in general most teams don't focus on it, they just kind of wing it.  Lots of other quicker teams were using rental boats, which were stubby and not the right tool for the job.  Don't tell them, though, or they might find themselves a nice Jensen like we rock!

We hit all the checkpoints in very close to the straightest possible route, it went great.  Lake was perfectly calm.  In the process we passed two other teams, one all-male and the other a co-ed team.

Still. we didn't quite know for sure where we were in the standings...

By the last bit of the canoe, we were on our own - no teams we could see in front to catch, no teams behind that would catch us.  We pulled in, ran to the finish ... and wow was I glad to be done.

4th overall, 2nd two-person male... really exciting for sure, especially on our first crack at this style of race!

All in all this was just a really well run race, lots of fun.  There were people really racing it, there were others just out for the adventure, and I would say everyone left happy.  We will definitely be back (possibly/probably for one of the longer distances)