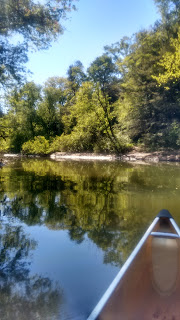 I originally wrote about Paddling Duffins Creek in Ajax, Ontario a while ago, but figured I'd post some updates.

They've added a canoe/kayak boat launch and dock at Rotary Park in Ajax.  Used to be a bit dicey to launch there, but now it's wonderful.

No rain for a few weeks, so the creek was quite low.

I still made it up to the 401, but it was really shallow and not very fun for paddling up-stream from about Bailey up.  Downstream was mostly fine, but there were also a few small rapids sections that were quicker and trickier than I remembered.

South of Bailey, everything was still nice.  So if you're not the greatest paddler, dropping in at Rotary Park and going up to Bailey and back is a good day out (about 4km each way, 8km total).  Mostly away from civilization, other than fishermen.

A few weeks ago we launched at Rotary Park, but then found the lake was completely placid... low wind, mostly from the north.

We were able to paddle all the way from there to Lynde Creek Conservation Area in Whitby.  Really nice paddle.

I'd just caution that the lake can bite you if you're not careful... so watch the wind forecast.  But lots of nice areas around Ajax.

Posted by jonovision_man at 2:22 PM