I went for a paddle on Lake Ontario on Sunday.

It was a windy day, but the wind was from the North, so when I arrived to launch my boat Lake Ontario was completely placid.

I launched around the red dot.  When the wind is from the north, our side of the lake is calm.

I started paddling, and all was wonderful.  I had a slight headwind, but nothing to really bother me too much.

As I got closer to the far end of my intended trip, I noticed the wind had changed slightly.  It was now more from the West, and the waves were starting to pick up a bit.  Nothing too bad, so I kept going. 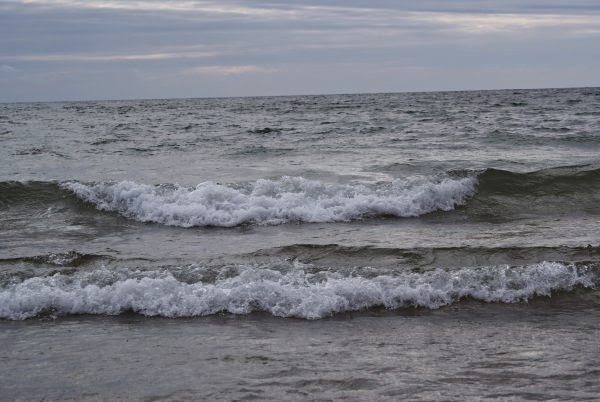 I swear not more than 5 minutes later I was rocking and rolling.  I decided it was best to turn around, short of my destination, but I was getting worried.

Now the wind was at my back, I was fast... but the waves were faster, and building!  Soon they were up to 2-3 foot swells.  I would feel the back of the boat rise, the wave would get under me and I would almost surf the crest for a moment... then woosh, front comes up.

Several times the boat twisted entirely sideways, I was incredibly lucky to stay dry.  Still not sure how a wave didn't manage to wash right over the boat!  I was just very dainty, tried not to make any sudden moves.

Finally - mercifully - I made it back to shore...

This is what the wind actually looked like.  The top arrows show the direction. 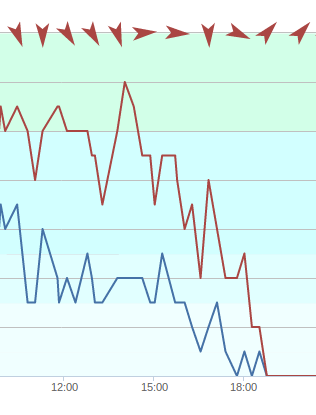 It's just amazing to me how quickly the lake went from completely calm to ferocious.

Windfinder.com had predicted a slight shift to Northwest.  In hindsight I should have paid more attention to that... but really when the wind is that strong, it's best to avoid Lake Ontario.  It's such a large body of water that it can really bring a strong lick.