First point of clarification: this is the Pigeon River in Kawartha Lakes (near Peterborough) not the one near Thunder Bay, or any of the other Pigeon Rivers out there! 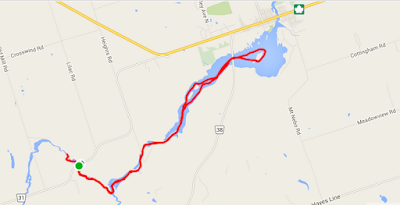 We parked where the Victoria Rail Trail crosses Mt Horeb Road.  There's a little path on the southeast side of the bridge that other people have used to launch boats - it got the job done.

First we tried going upstream.  It was passable but not by much, and got very shallow at spots.

Downstream was quite a bit better, especially once we passed the junction with the other arm of the river.  We saw a much better launching point on Hogsback Road - if we go back, that's the one to use.

Scenery was beautiful - lots of points where you are well away from most of civilization.  Nature, birds, the odd fisherman.

Then we got to the flooded area with old tree stumps and logs everywhere.  This goes on for quite some time, it's like a tree graveyard.  Shallow at times, loggy and stumpy other times, really hard to find a clear path through.  We figure this is the flooded area behind the dam at Omemee, but that was built so long ago it's hard to believe the stumps and logs have survived this long!

After passing under Ski Hill Road, it was a bit better - at least on the north side of the island.  South side, still shallow and not great.

All in all I wouldn't really recommend paddling here.  It was fun to check out, but in a few weeks the weeds will really take over, it was pretty shallow for paddling in a lot of places, and the logs/stumps were really annoying.