As I do more paddling, I've found it increasingly important to know the conditions.  This is especially true on large bodies of water (wind!) and up/down rivers and creeks (water flow).

This is an invaluable resource.  Live updated water flow data from stations across Canada, telling you in very near real time just what rivers/creeks are doing. 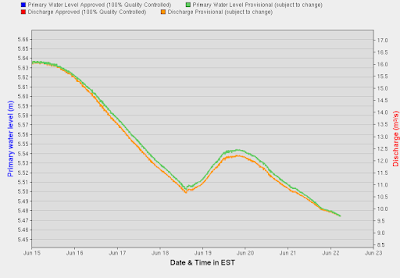 The water levels and discharge usually track each other pretty closely, but if you're going into a river/creek that has shallow areas it's good to know when the levels are high enough for you to have clearance.

This weekend I paddled the Big East River as part of a race - I had heard the currents can be very strong, so I compared last year's data to this year's and realized the flow was about 50% of what it had been, so it was going to be fine.

There are two forecasts - the so-called "Superforecast" seems more reliable generally (apparently it uses more data sources).  And it has the word "super", so it goes without saying it would be great, right?  Who do you trust more, "man", or "superman"?


There is also a WindFinder phone app - I bought the Android version, it's handy, lets you save favourite locations and such.

My wisdom about wind on a large body of water:  the more water the wind travels over to get to you, the bigger the waves.  So if you have a wind out of the north but you also have shore to your north, you'll have protection... if you are on the south shore and have an entire lake to your north, look out!

Also wind can really impact the boat's handling, tends to spin you ways you're not trying to go.  You often end up paddling on one side what seems to be forever just to go straight...

Enjoy!
Posted by jonovision_man at 9:15 AM