This race is a 160km cross-country adventure through the Oak Ridges Moraine near Toronto, Ontario.  It's a true gem that we have so much conservation land in this province, and great volunteers that keep the trails maintained. 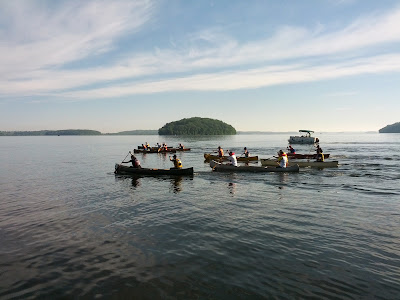 This is my 4th year doing this race, but the first where I haven't been the captain of a team.  It was a bit more relaxing not having to worry about the logistics!  Our team was the Ridge Racers, an established team from years ago that needed a few extra bodies, which we gladly provided.

My first run was stage 4, one I had never done before (although we'd scouted part of it by bike once).

We were in 3rd place overall at this point.  I wasn't sure how far back 4th was, but we seemed to have a pretty good cushion.

This one starts out in some nice wide trails, but with all the rain we've had there was a fair bit of mud.  Thankfully I had on some decent trail running shoes, which made a very big difference - lots of grip.  A few hills, some challenging.

Soon after, it diverts to a very narrow winding single-track trail.  It's quite overgrown and tricky, had to keep a close eye on the trail blazes to not go off-course.

At 2.5km it opens up onto some road sections - first gravel, then paved.  These were hilly but managed to get a pretty good pace through this section.  Only problem was there was little protection from the sun, which started to take it's toll!

At 4.75km you can see the finish across the highway... my kingdom for a bridge!  Instead, you have 1.25km of really tough trail ahead.  The first part seems like it should go downhill, like the highway does, but instead it mysteriously takes you UP.  Then down.  Then UP again!  Finally you get the big downhill... but it's so steep you can't really run it, just survive it.  At the bottom is the tunnel, and then...

The last 500m are brutal.  Uphill, loose rocks, in the blazing sun.  My heart rate was well into the high 180's, which for a 37-year-old is near-death-experience zone (my max is around 195bpm!).  I dialed it back a little, then gave it a final charge when I finally (mercifully!) saw the finish line.

Only 6km, but tough stuff!

It had been a few hours since my run (about 4) so I was feeling very recovered.  Had lunch, drank fluids, and got myself ready to hammer a bike.

Had my cyclocross bike, which is the right tool for the job.  Mostly roads and packed trails, no reason for a big heavy mountain bike with shocks and stuff.

We had just dropped to 4th as my bike started, and the team now in 3rd had a good 8 minute lead when I started.  Not sure how far back 5th was at this point, but no way I was letting them catch me anyway, so it was moot!

Saw our runner and hammered it from the start.  First challenge is a long paved climb, I was pretty eager at this point so flew up it.

At 2km you turn onto the first off-road weirdness of the day... this is a rocky steep weird trail.  I hesitate to call it a trail, because it's really more just a right-of-way that you can kind-of bike through.  I flew through it anyway, throwing caution to the wind and letting my bike absorb the bumps (which, being a cross bike without shocks, it doesn't do very well - hang on!!!)

Thankfully this only lasts about a kilometer, then it's paved until the 9km mark.  I got down into the drops and powered it as best as I could.  This section was mostly uneventful (other than some @#$%ing guy in a minivan cutting me off while talking on his @#$%ing phone!).  Slight headwind, but that just made the cross bike that much more of an advantage over MTB.

At 9km this fires into the York Regional Forest.  Beautiful trails, well maintained, wide, I absolutely love this section.  It always feels longer than I expect, but with the scenery and fast speeds through the forest it's just exhilarating.

I kept hoping to see the team in front of us, but 8 minutes was just too much to make up.  In the end I took 5 minutes out of them, reducing their lead to 3mins, so hopefully that closed the gap enough for us to finish on the podium!

Biked back to my car along the trail.  Didn't see any other teams in the forest section (although I did see two chimpmunks doing it... umm, weird).  Finally saw some teams coming through on the road sections, but none were elite, so I don't think we were in any danger of losing 4th.

All in all a great day!  I love this race, everyone involved is just really positive and awesome.  Volunteers are amazing, participants are chatty and social, it's like a day-long party with a bit of racing thrown in.