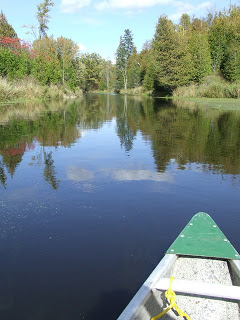 Canoe the Nonquon is a 26km canoe race in and around Port Perry, Ontario.

We were in the "recreational" men's class, which basically means you don't have one of those C1/C2 missles made of carbon fiber!

The race starts on the Nonquon River.  The first 8km or so are very twisty and have the potential to be quite shallow.  Fortunately there had been a lot of rain in the week before, so water was nice and high.

Our boat is a flat-bottom 17.5' canoe, which is great in a straight line - not so great in curves.  Still, we've done a lot of work to practice our cornering skills, and I'd say we held our own.  Certainly the current helped, and we were averaging something north of 8km/h through this section.

There was a canoe that had started a minute or two in front of us that we caught up to in this section, but we couldn't quite get close enough to pass.  But keeping them in sight proved motivational!

The river widens significantly as you near the village of Seagrave.  We thought our pace would increase at this point, but it didn't quite turn out that way... in fact our pace slowed.  I think this was partially due to the slower current, partially to the weeds, and partially we were starting to get a little bit of fatigue creeping in.

Fortunately there was that same boat in front of us... we got as close to them as we would all day early in this section, before they crept away from us and widened the gap.

We were looking forward to going fast in a straight line.  Not quite how it turned out.

There was a very strong headwind directly in our face the entire way back.  Worse yet, the water was very choppy when we first enterred the lake... this killed our speed, and we watched helplessly as the boat we'd been chasing pulled waaaay off into the distance.  We could still see them the entire time, being a lake and all, but they soon became a speck on the horizon rather than a target we felt we could catch!

After awhile that headwind wore us right down.  It felt like we weren't moving at all... I kept looking at my GPS watch just to make sure we still were!  Our pace went from around 8km/h way down to the 4-6km/h range, I think we averaged 5 and change.  Sad.  But it was our longest ever canoe by 10km, and by far the longest we'd ever paddled straight, so not entirely unexpected.

3 hours 17 minues... still not sure on how we placed, we left before everyone had finished (and at the time we were 4th in our category).  We were hoping to go quicker, but didn't expect that bad of a headwind either!  Glad to have done it, great experience and learned a bunch.

Posted by jonovision_man at 1:55 PM