What a day!  Great weather, good times, and we finally pulled it all together for a great result.

Update: We were declared part of a 3-way tie as winners of the race!  Timing is to the minute per stage so I don't think organizers knew for sure exactly who won... we'll take it!  9:52 overall time, much faster than last year's 11:28 or the prior year's 13:31.

The Team: Blood of the Ridge 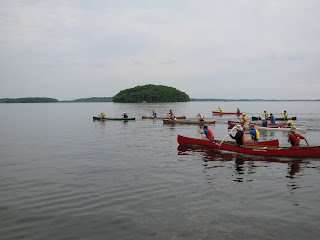 We have had people come and go each year so far, and this year was no different!  But we have a really strong line-up now, our strongest yet.

We started off on the right foot (paddle?) - and then some!  Our canoe pairing smoked out a good 5 minute lead on the next closest boat.  They were just awesome, a real treat to watch.  The shoreline was buzzing - who are these guys?  Best of all, they were using the boat me and my buddy bought... proving that it really is a fast boat, and we're the problem! 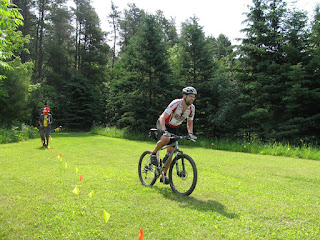 I waited a bit before starting, probably about 5-10 minutes, since there were no other teams who had come to the start yet.  There is no penalty for this (transition time does not count against you) so it seemed like a good strategy.

Unfortunately when we did start, the guys around me were just too strong to hang with.  I tried, but just didn't have it in me.  I resigned myself to aiming for my target time, and managed to shave a minute off of last year's by the end of it.

This stage is very sandy - the first year I did it we didn't know that and I had the wrong tires (cyclocross tires).  The wider tires definitely helped, I was about 10 minutes faster than my first go at this stage.

Stage 3 is a run, our runner rocked it out, besting last year's time by a lot (last year we got lost!) and the year before's by at least 5 minutes.  A big improvement for us!  It's a tough stage - net uphill with lots of sand - but he really stuck it out. 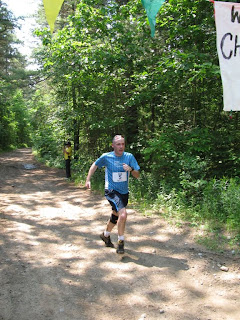 Stage 5 winds through some very rough overgrown sections... it's the one stage I've never really seen that much of myself, but our runner said it was very ingrown!  And the part I saw looked really rough, I don't think that trail sees many people outside of race day.  He smoked it though, cutting time off of both our 2010/2011 times again!

So at this point we were sitting pretty, with the worst of the navigationally challenging stages behind us!  This was shaping up to be a great year...

... and then Stage 6 hit.  A straight-forward bike, the guy doing it had done it in 2010, we had no concerns at all.  He headed up the first hill, and I left to the next checkpoint in the van.  Waiting.  Waiting.  Waiting.... now I'm getting worried!  Then we get a call that someone broke a chain!  Ohhhh crap.  I asked the organizers if he needed us to go back and help, they said they didn't think so, so I hung tight and waited for news.  Thanks to some very helpful other teams, he got the chain fixed and re-started the stage.  We're still not sure if they're going to give us the original start time or the second start time for the stage, hopefully the later since he did start at the start and complete the whole thing, but we'll see!  If not we'll be out about 25 minutes, which would be a real shame.

Stage 8 and our "wicked awesome roadie" came along.  I always feel like I'm pretty good on the bike, but then there's this whole other level I can only envy... he was just so fast.  I won this stage last year, and he killed my time by several minutes.

This stage is an 11km running stage (advertised as 10.5, but Garmin wouldn't lie, would it?).  It was midday and super hot, near 30C.  I started out at about a tempo pace, trying to really pace myself through the hills.  When I reached the first corner, I realized someone was right behind me... "red shirt"!  He was from the Flying Squirrels team, and the last thing I wanted to see when trying to keep from blowing up!  I told myself to keep my pace and ignore him, if he's faster then he's faster, let him go...

After the first forest section, I looked back - he was still there, about the same distance back.  Through the next forest section I just kept my head down and didn't look... but I could feel him stalking me!  We hit the road, back out in the full sun - I was drenched in sweat and really feeling the heat, but he must have been too as he still was about the same distance back.

Somewhere in the next forest section I lost him.  There was a series of switchbacks where you loop back to where you just were, and I didn't see him - he was gone.  This was a relief, now I could just focus on kicking out the last half of the stage at my pace!

Once again, out on the road, and the sun cooked me.  I clung to any hint of a wind, lifted my shirt a bit, but it was really hell.  Finally we went back into the forest for the last section before the checkpoint... then it got all sandy and tricky with the footing, but at least most of the hills were now behind me!  I flew down the final trail and emerged from the forest having taken at least 5 minutes off of our 2010 and 2011 times.  Yay!

Stage 10 and our guy rocked it out again!  This stage starts out quite nice, but as you go the trail gets more and more rough and the terrain gets tougher and tougher.  First 1/3: nice, good trails.  Second 1/3: hilly, trail gets rougher.  Third 1/3:  swampy!  He earned us yet another ~5 minutes off our previous years time... these are starting to add up!

Stage 11 and our "wicked awesome roadie" was back... he hammered it, somehow finding 4-5 minutes over last year's time over a 25 minute stage.  Stunning.  I would really hate him if he were on anyone else's team.

I had gulped down enough Gatorade to recover from my previous sauna stage... and actually felt really good at the start of this stage.  The first 1/2 is mostly downhill and very fast, I was flying.  The second 1/2 is flatter but sandy - that was really the only obstacle, the sand.  It sucks some of your pace, but all in all I really had an easy go.  Nobody around me the entire time, just push push push!  I think I took about 10 minutes off of our 2010 or 2011 times, I was around 5:15/km pace vs previous years I know we were over 6. 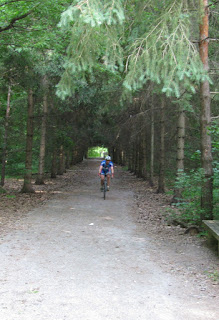 Stage 13 and it's "wicked awesome roadie" again for his last mini-prologue.  Once again he hammered it, flying out of the forest at the end like a bat out of hell!  At this point we were actually 1st overall on the road, which doesn't necessarily mean anything as other teams could have rested long between their stages (and we knew at least a few had).  But it was really nice being way up there, easy to get parking at the checkpoints!

Stage 14 and the final run stage... it's been a lonnnng day, but our runner still matched his time from the previous year.  He was one long traffic light away from beating his time, so really we were bang on.

What can I say?  I'm delighted!  Nobody got lost, and other than the chain calamity we were all just so fast, faster than I ever would have imagined.  Everyone - including me - found time over last year that I didn't always expect was there to be found.  It was just a fantastic day and our team was really on it.

Results will be posted in the next day or two, but I already have the result I wanted - we finished around 7pm, which was well into the 10 hour range.  Fast fast stuff.  Yay!

It was a great day Jon, thanks for including me. Quite a roster of athletic friends, each person that showed up for their first stage was seemingly quicker than the last despite the increasing temperatures!

Very true! We've been very lucky to find new great team members year after year... it's like Bill and I joke, the teams getting so good we won't be good enough to be on it! :)

Nice work and a nice recount of the race. It was fun racing agianst your team. This is the first year for the Flying Squirrels and we had a blast. I think we learned a few tricks for next year. Maybe we can close the gap for next year :)

Haha, awesome! We've definitely learned a few things over the years, our first year we finished in the dark... you guys did great for Moraine rookies! :) See you in 2013!

It was my pleasure to be your "wicked awesome roadie". Had a fantastic time and already looking forward to next year. Trying to work out in my brain how I can shave some time off next year... gonna be a tough goal!!