I've been trying to get out to do this section of the old Victoria Railway (aka CN Haliburton Subdivision) for years, and today was finally the day!


If you dig rail history, check out:
https://www.railwaypages.com/victoria-and-haliburton-counties

We wanted to make the trip 50km each way, 100km out and back - so we actually started in Burnt River.  We parked at the community center (big public parking lot) and hit the trails.

The Victoria Rail Trail runs from Bethany to Kinmount (via Lindsay), we did the northernmost section from Burnt River to Kinmount.

It was MUCH improved from the last time I used it - sandy sections had been replaced by a really beautiful wide well maintain path.  It was in excellent condition, one of the finest rail trails I've ever been on.

This section was the main focus of the ride - and it was a bit wild. Information on this trail here.

As we left Kinmount, it was immediately clear this was not going to be a picnic... the trail was bumpy, sandy, rocky, and just generally tough to ride.  We got a bit worried - if this is how bad it is close to town, how much worse is it going to get?

4km from Kinmount was this cool relic in a place called "Howland".  This is the former switching house between the Victoria Rail line and the IB&O railway (Irondale Bancroft & Ottawa).  Unfortunately IB&O is mostly long gone, no trail to speak of (at this end) - but neat to see some of the history there.

This guy stopped and found the old turntable that used to be there (for turning the engines around).

We noticed at the next bridge you could look down and see the old IB&O right of way, where it once crossed Kendrick's Creek.  Very neat as well!

Along the way there are a few bridge crossings, waterfalls, really nice forest, swamps... just generally a lot of natural beauty.  Rocky outcroppings. 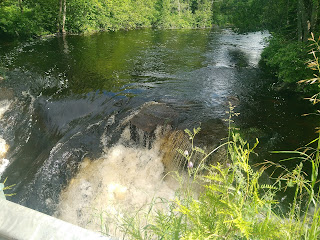 The trail surface was rough, though, until about 10km out of Haliburton... we were on our cyclocross bikes, which without suspension was a pretty rough ride.  If you are trying this, prepare for a tough slog... and if you don't like a tough slog, do the sections south of Kinmount on the Victoria Rail Trail!

A few pics from Haliburton... 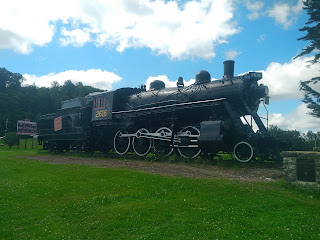 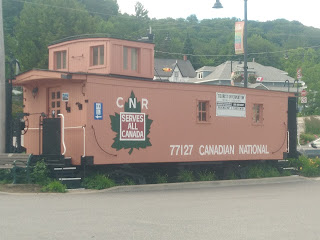 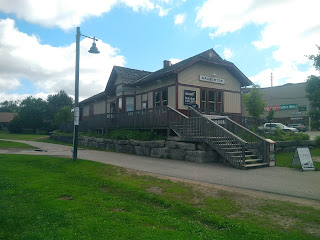 In the end it was almost exactly 50km.  After a quick Subway lunch, we doubled back to Burnt River for a 100km gravel and rail trail day!

ATVs are allowed to use these trails.  It wasn't a problem at all, though, we encountered about a dozen over the ride and every single one of them slowed down as we passed and was extraordinarily courteous.

Kinmount and Haliburton are well serviced, but there didn't seem to be anywhere in between to stop to refuel/etc.  Most of the towns along the way relied on the rail (and some terrible farmland) so they're really not towns anymore.... almost Ghost Towns?  So make sure you're self-sufficient - it's pretty remote at times, for some longer stretches.

We encountered a few off-leash dogs being walked, so I think that's just something the locals do.  At least one was fairly ill-behaved.  Your mileage may vary.

Did I mention it's bumpy/sandy/rocky?