This year was a little bit different.  We were bused out to a starting point outside of the property, then had to do a trail run back to the start.

I was honestly a little disappointed!  When I heard we were starting somewhere remote, we thought for all that extra expense/effort we'd be doing something kick-ass cool.  Most of the trail we'd run before, so we only really did about 1.5-2km that we hadn't seen before.  But that's OK!

The run was good - rutted ATV trails, muddy sections, pretty hilly.  There were a couple of bridges out, so we had to bypass them by wading through the lake.  We were told "knee high water", then found ourselves emerged up to our belly buttons!

We held back for the most part, I was in my "I can do this all day" pace (not sure about my partner but he kept saying he was OK so I kept it up!).  It's a long day, nobody gets a ribbon for winning the opening run!

After the run we had about 7.5 hours left to get to as many checkpoints as we could.

If you're not familiar with this kind of race - you're basically given a map and an instruction sheet detailing the location of numerous checkpoints.  Each has a point value.  You can take any route you want, with the goal of getting the most points of any teams.  If there's a tie, the team that got to the finish first wins.

In past years we were allowed to canoe and run only (and the opening stage was mountain biking).

This year we were allowed to use the bike, canoe or run!  It was a fantastic change, the strategy was quite a bit different as you could bike to some far-flung places before running.

We split up the checkpoints into three sections - bike, canoe, bike.

We started by biking down this long road and picking up the checkpoints along it.

The first checkpoint was at the top of a giant rock hill/cliff.  We found it pretty easily.  The second one we had seen from the road - it was a tough slog to get to it, but still pretty easy.

The third one was problematic... it was listed as being near a creek, and when we got off the bike we were near a water thing and what looked like a creek... but no checkpoint.  A bunch of teams wandered around with us looking lost/confused, until finally we found a much larger creek quite far into the bush from where we'd started!  Ugh.  Took us about 15 minutes of screwing around in the bush to find it.

The next one was reasonably straightforward, although I made a small mistake and we came at it from the wrong end - I overshot it a little.  Maybe 5 minutes added.

We skipped the next one.  CP62.  We knew the "trail" it was on (no longer much of a trail) from previous years, and we figured it would be time consuming... this was under the assumption that clearing the course was impossible - we'd never been even close... more on this later, but we really made a mistake not going for it!!!

One other rule change for this year - we weren't allowed to do any of the "staffed" checkpoints until 2pm... we realized all of a sudden we were way ahead of schedule!  Our plan had assumed we would hit those checkpoints as part of getting other ones.  So we made a game-time decision to go for this one along an ATV trail (CP63).  We were able to bike all the way up to it - it was rough at times, but I remembered the trails from a previous time and I it really paid off.  There was one deep creek crossing, but other than that it was easy peasy.

The next set of checkpoints were accessible from the boat.

The first one was in the middle of the lake - you could see it from shore, so easy 60 points!  We had to skip the staffed checkpoint as we were still too early... but other than that we went according to plan, hitting the checkpoints along the lake without much trouble.

There were two that were inland that we had to bush-wack to.  The first we had planned to get to - it was along a rocky creek and up to a marsh.  No trouble finding it.

The second one we hadn't planned, but we were now realizing that clearing the course was a distinct possibility!  This was on a beaver dam between two swamps.  We took a rough bearing, found the creek we needed to follow, and nailed that one off too.

Island checkpoint has been a staple of the race, easy one.  Then the first staffed checkpoint...

Inner tube.  You have to sit in it, paddle out to a buoy thing with the timing checkpoint punch about 100m out.  By "paddle" I really mean "flail your arms uncomfortably trying to move yourself in an inner tube"... I get to do this one every year, and I hate it every year - but I finally got positioned right and managed to do it pretty quickly.

Paddled back to the start/finish and that was the end of the canoe for the race! 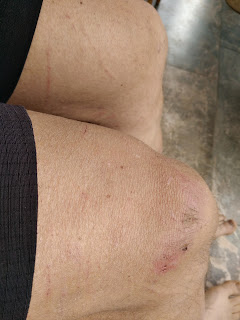 This ended up being a bit of a mess.

First we nailed off a stand-up paddleboard stage.  My partner killed it, it was super impressive (but he's been practicing since we first did this one a few years ago!).

Then there were three checkpoints up in this marshy area... it was utter drudgery.  We biked as far as we could (which wasn't far) and then trudged through heavy heavy bush for the next hour and a half.

Devoured by deer flies (DEET is a scam!), scratched to hell by brush... trudging through all kinds of nasty marsh... this is what we hated last year, and this year we were back at it!

Our navigating was on point - looking at the map we were very direct for the most part, getting to the checkpoints.  But it was just very tough going.

One other rule we had to deal with - you had to visit the start/finish checkpoint between 4pm-6pm (5-7h into the race) and tell them what checkpoints you'd be attempting from then on.  We had hoped to complete our full bike loop then check in, but it was clear we wouldn't be able to get there by 6pm... so we had no choice but to abandon our loop and go back to the start.  This cost us more time, another 10-15mins of backtracking probably.

There were two major checkpoints left, both reachable by bike.

The first was a trail building checkpoint.  This, again, ended up being a mess!

We got there, and ended up having to run a lonnnng way off the main trail to get to the point where they were building.  Unbeknownst to us - we were running on trail that had been built that day, by people who did this checkpoint earlier than us!  If we had hit this one earlier we'd have saved ourselves a good kilometer of running... UGH!!!

Then more bad news - the 80 point "bonus" checkpoint you got for trailbuilding was back the way we'd already gone (Bike #1)... so we'd have to double back later.

Then even MORE bad news - on the way out, on a giant rocky ledge, I managed to stub my toe hard on a stump I didn't see at all... I went flying and hit the deck.  My toe is a very nice shade of purple now... it hurt like hell!!!

After the trail build we went to the far bike checkpoint - it was easy to find, 80 points, we felt pretty good about that one.  By this point we were starting to fade pretty badly (my partner especially!) so our pace was pretty bad...

We doubled back on the road to the bonus checkpoint, then came back to the start/finish.

There were two last staffed checkpoints.  The first was one we have always avoided.... you have to find a CD on the bottom of the lake at a depth of about 8 feet.  I can't get down to the bottom - I don't know what it is, I get my head under water, but I just can't get down deep.  Fortunately a helper kid was there to do it for me.  Yay!  Still counts!

And that was all she wrote for us!  We finished with about half an hour to spare.  We had missed just one checkpoint... we were kicking ourselves, but there just wasn't time to go back and get it.  It wasn't completely impossible, but it would have been a risk, and we were pretty done.

On further reflection - when we went back to get that bonus checkpoint, we were pretty close to the one we'd missed... but in the moment it wasn't even a flicker in my mind.

We ended up finishing 8th in our division (team of 2 male) - the top 7 teams all ran the table, the top team actually got some bonus checkpoints available to those who got all the other checkpoints.  Amazing.

I'm reasonably sure we could have run the table... I'm not quite as sure we'd have improved on our result, we'd still have had to have finished sooner than the other teams that ran the table, and I think we'd have just squeaked in under 8 hours.  We would have had to have a few other things go right for us - like not having to double back for the mid-race check-in at the start/finish, or not having to go so far down the trail for the trail build, or after that not having to double back to get the bonus checkpoint... mostly just unlucky, though, you can't anticipate everything!

This race is so well done, it's just awesome fun.

What isn't that fun is the bushwacking in some of the areas... there's some pretty passable brush in some areas, but others are marshy hell.  It becomes drudgery... I'm sure some folks like it, but neither of us do.  We didn't have to deal with that in the 4 hour version a couple of years ago - seems to only be a feature of the 8 hour!

So we'll likely go back down to the 4 hour next year.  Later start (get to sleep in!), less horrible bush-wacking, just as much fun (more fun?).  I think we can rock it.