Time flies when you're not having fun!

At the baseball game they have a "designated driver" program - if you agree not to consume alcohol, you get a coupon for a free Prohibition Brew by Budweiser.  It's not bad!  It's not good, but it's not bad! 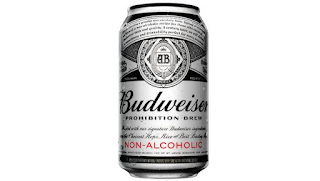 I usually veg out after dinner - but without a beer or two (or wine or whatever) I find I have more energy to actually do stuff.

My training hours have increased for sure - over 10h the last couple of weeks.  Just have less inclination to put off the run or ride.  I'm already really active, but the extra couple of hours a week has helped.

I don't snack as much - but I still snack.  And I'm still hungry after dinner, that kind of surprised me.  I used to blame the alcohol for that.

My weight is down considerably - I was losing weight but very slowly, now it's coming off at about a pound a week.  Maybe more, it's too early to really know for sure.

My mood is improved.

Just in general it's for the best, I know it's healthier.  I do miss a good pint, though!