I want to do something epic and I have always had this one in mind, but haven't found a day to pull it off.

Friday is the day!

Bike from Whitby to Burlington (or the reverse).
Use the GO train to get back (or to the start).

Note: after actually doing it - the hills west of Yonge are much, much harder than the hills east of Yonge!  I prefer having fresh legs to tackle the worst stuff and have a progressively easier ride as the miles add up - so next time I will find a day with favourable winds and go Burlington to Whitby.  It should be easier! 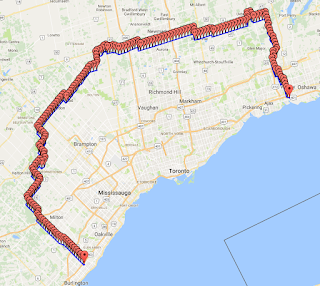 Note: St. John's Sideroad is closed at Highway 404 until December 2017 - actually it's a longer stretch than that.  I added 5km messing with detours - check for construction updates before using this route!!!

There are probably shorter routes, but would they be as cool?  I.  Think. Not.

I used a bunch of sources, mostly Strava Heatmaps to figure out where people ride a lot.  I'm hoping that has yielded a safe route without too much traffic!

0.1km - on the east side of Brock are a bunch of food options, McDonald's and some other stuff near the gas station.

39km - turn north and go into Uxbridge, lots of stores etc to refuel (and a nice little town)

56km - turn south onto Ninth Line, just before Musselman Lake on the right side there is a little store where lots of cyclists congregate to refuel

94km - right at the intersection of Main and Church in Schomberg is a little convenience store.  How convenient!  Edit: I stopped here, had everything I needed.

193km to the end - lots of stuff along Appleby Line.

If you go Burlington to Whitby - you get to go up the infamous Rattlenake Point climb.  It's steep and a good way to warm up the legs!  In the opposite direction it's a sketchy downhill instead.

There are actually quite a few climbs end to end, no matter which way you go.  I suspect East to West is easier (EDIT: NO IT ISN'T!!!), but it could be about the same?  Either way the start and end are at about the same elevation.

Pick a day when the wind is blowing the right direction, because 195km of headwind is a lonnnng day at the office.  I'm planning to go westward as that's the way things are shaping up for Friday.

Enjoy! I hope the rain holds out.