It's been a tough year... successes have been few and far between, disappointment has been rampant.

Today, it finally all came together. 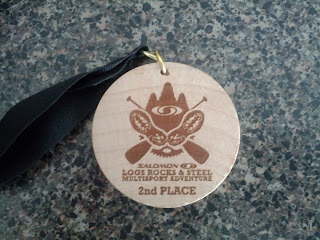 2nd place among the male teams, and 3rd place of all teams on the Pinecrest Course!

Perhaps best of all - 1st place of all the canoes!

Well now I've gone and given away the ending.  Now let's rewind to the start...

Forecast: rain.  Lots and lots of rain.  In fact it looked like it was going to be absolutely pouring for the entire race.  Rained the whole drive up, but then we noticed it was lighter and lighter.

And then it stopped... this was clearly a sign of good things to come! 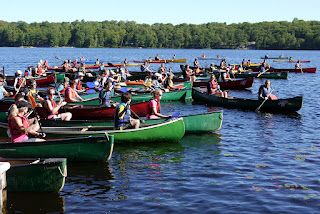 Last year this was our worst leg, but this year we bought a good canoe and practiced a fair bit.  We figured out how to keep the thing straight in both good and bad water, how to make a quick turn, and just spent enough time in it to feel comfortable.

It paid off, big-time!

We wanted to get a quick start to get some distance between us and some of the wobblier boats, as last year we found ourselves battling a lot of other canoes.  Within a few moments we had only 2 kayaks ahead of us, with a 3rd on our left... but no canoes!  I didn't look back, just kept focusing on keeping us on track toward the island.

The 3rd kayak passed us as we went around the island, as I was a bit tentative with getting too close to shore... there were sandbars that came out a ways and some rocks, he took it tighter - but really I wasn't that concerned with what the kayaks were doing, the solo guys were pretty much in a separate race.

After the island I took a quick look back - there was one canoe close to us, the rest were a fair distance back.  These guys were using kayak paddles - I'm not sure if that's a big advantage, I've heard conflicting things.  Still we now knew who the competition was and it was on like Donkey Kong!

We executed a pretty lousy turn around the far buoy, but looking back the others did even worse, so we just put down the power and headed for shore.

Then coming onto the dock I was almost knocked into the water as we tried to hoist our 18foot canoe over some metal posts... oops!  I managed to balance on some wires holding the dock together and pop back up onto the dock.  Close call.

Felt fast, got our bike stuff on, but not fast enough - someone passed us in transition!  We caught them soon on the bike, though, and the reason became clear - they didn't change into bike shoes.  We didn't see them again.

Started out great on the road, but soon we hit the off-road.

These trails are rough.  They alternate between rock and mud, and with the rain the mud was really brutal.  Lots of standing water... and the rock was slippery at times.  It was survival mode, we got passed by a few people but I wasn't sure whether they were solo, teams, or doing the long course!  I spent way too much time off my bike.

We got to a fork in the trail and the guy there said "you're the first team through".  Umm, what???  I was shocked, I thought we'd give up a place or two by then!

Finally, mercifully, we were back on the road and flying along again.  We picked off one of the solo guys that had gone past us, but we still were a bit off of last year's time.  Mostly this had to be down to the conditions, it was much tougher with the rain.

Still in in 1st place among the teams!  We were doing great - fast transition, out!

About 300m into the run, our 1st place turned into 2nd, when one of the other male teams passed us.  It was clear with the pace they had this was a permanent situation, so we didn't kill ourselves trying to keep up and just kept our own pace.

This run is diabolical - it's not just hilly, but rocky, overgrown, windy, a true "adventure" trail!  We knew what to expect but it was still tough.

And after all that, in the last 200m or so, my partner slipped on the wet dock and bumped his head!  He sucked it up and ran to the finish, cementing our awesome finish.

Finished about a minute faster than our 2011 time, to my surprise!  By this time we knew we had 2nd among the male teams locked up, but with the staggered start there could be other types of teams behind us on the trail that were ahead of us... and this ended up being the case, one of the co-ed teams finished behind us but was 2nd among the teams.

I'm absolutely delighted, though!  We improved our time, we moved way up the standings, and we raced among the best all day long.  The work we did all year paid off in the canoe, and the other pieces just fell into place nicely.

Best of all was the canoe.  I am sure there are faster people out there - we know some of them!  But the improvement was huge, I think we're something like 6 minutes faster than last year.  That's over a 25 minute canoe, which is enormous.  Working on something and having it pay off like that is extremely satisfying.

Next year we'll be back!  It's a great event.  Awesome food, nice prizes from Salomon, and just a really fun race.

Posted by jonovision_man at 5:49 PM