2nd in our division! Team of 2 Male, Masters. 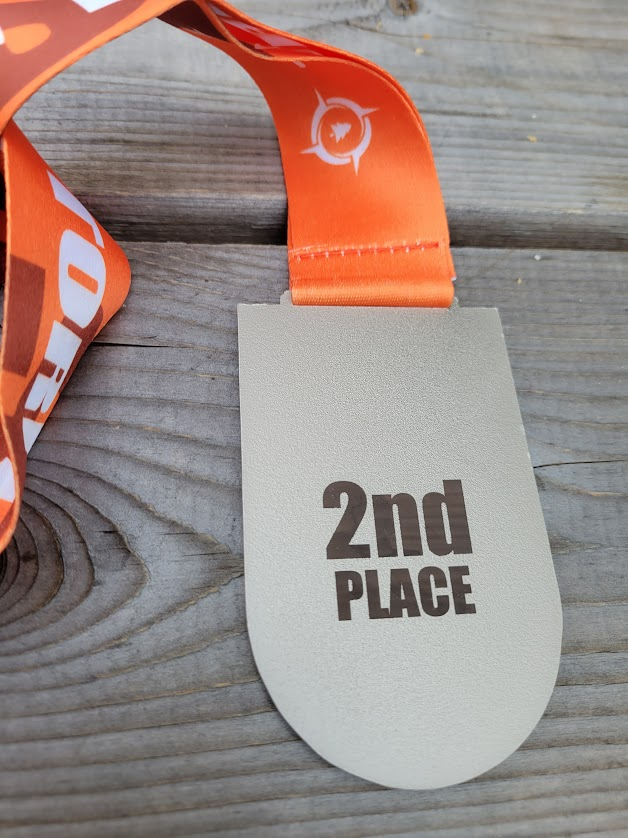 In any year, this would be super exciting for us, but this year has been hell.

More on that... now.  Feel free to skip to the Race Stuff.

I haven't been right, at all, all year.  I had COVID twice (yes I was vaccinated, don't judge me!) and a serious blood clot in my leg likely from the first COVID infection.

So I was not looking forward to this race until about a week ago. In fact I was dreading being the "slow guy" holding us back all day, it's a terrible feeling.

Last weekend we had a great ride, though. My riding hasn't been terrible and this one just felt great start to finish... back in the forest, lots of energy, so I started thinking maaaaybe it'll be OK???

The Race - Storm the Trent

I have to also say a bit about this race, and the series - it has been a big part of our lives and goals since we first tried the Hike Course in 2015.  Every year we'd line up with maps and a desire to improve on what we did the year before.  Get better at orienteering, faster transitions, etc.

This is the "Final Edition"... for now! But it was announced at the race that "Storm Racing" will have a new owner, so hopefully something emerges from the ashes that's equally awesome!

Thank-you to Sean for all the years of really fun and challenging courses and races!

Our Race - Storm The Trent - Trek

Unlike pre-pandemic, the course maps and instructions were published ahead of time. This takes some of the fun out of the race to be perfectly honest... I used to love getting those maps on race day and having an hour to strategize and mark things before hitting the course!
We met a few days earlier and went through all the instructions, meticulously marking distances and directions and points of interest / possible confusion / etc.
In the years of doing this race, we knew mistakes kill, and even obvious checkpoints can be overlooked if you're not careful!  Knowing "it's at the end of this lake" or "at the top of the hill" based on the elevation lines is really key, no chances taken.
There's also just general strategy on the free runs - what order you hit the checkpoints in, for example. Generally better to hit a checkpoint within a short distance of some obvious landmark (ie. a trail junction) than go the other way and have to figure out which boulder they mean 2.5km later - it can be pretty ambiguous and confusing.

Did the normal check-in, dropped off the boat and bikes, everything ready to go... now it was time to carry the canoe down to the start.
And... disaster strikes. Where are my run maps???  I had my meticulously planned run maps in a separate bag to easily hold them during the runs.  Couldn't find them anywhere.
Panic. Freak-out. Thankfully we had maps the organizers had given us the day of and very good memories......... but with no time left to get ourselves down to the water, we had to make the painful decision to somewhat wing it.
I was gutted - I figured I would let down my partner due to my conditioning, but here I was screwing up something I had control over!!!
The Start - Canoe
The paddle was pretty simple, but I hadn't paddled a single stroke all year so I wasn't sure how that would go.  Fortunately it went great, we hit the two checkpoints and passed a few teams (and were passed by a few others).
We were using our cedar strip canoe, it's pretty heavy but with the new coat of epoxy it glided through the water really nicely!
The worst part was the portage... carrying that heavy thing up a steep hill, I was gassed within a few hundred meters. My partner took his turn and I managed to recover, then take another short stint at the end of the portage to the transition zone.

We dumped the canoe and hit the bikes - fast transition, no fuss no muss. Easy bike on roads to the first run.

This was the longest run, and used a lot of the trails we had seen the previous year.
We used the not-zoomed-in-map for this and our memories - fortunately obsessing about the course for a week before paid off. All the checkpoints were pretty easy to find (although somehow we saw teams doubling back who had missed them?? - I don't get it).
We alternated running and hiking/walking across some of the hills and tough terrain, but overall it wasn't as muddy as last year and just went fine!

This was another easy on-road bike to the next run. Other than hill after hill. After hill. 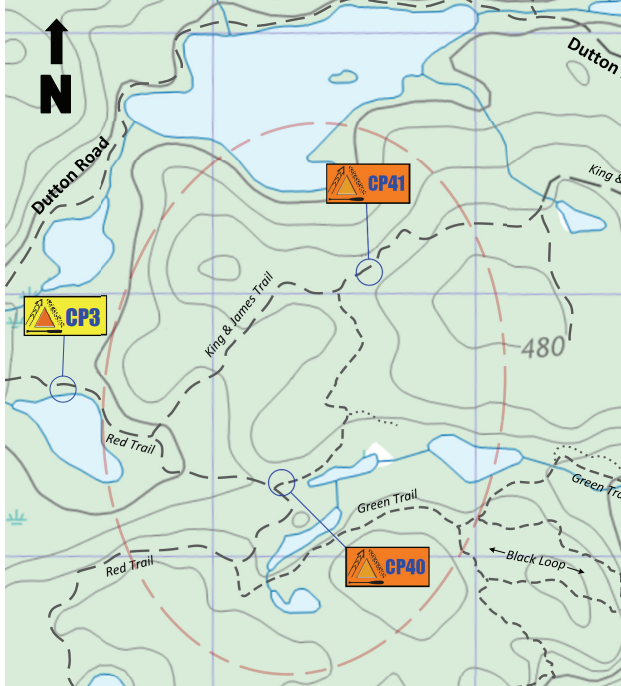 There were two checkpoints to get to (CP40 and CP41), each on what looked like significant trails on the map, with a not significant trail connecting them. We weren't sure how obvious that less significant trail would be... but it ended up being very obvious.
We took a less popular clockwise route to CP41, taking on the worst climbs at the start of the run.  This was probably the right call, as the decent down the other trail was more runnable this way?  Hard to know for certain, but it worked out alright, felt really good and strong at the end of it!
The climbs made these "runs" much more like "hikes", though... so steep, very hard to actually "run" up them.
Bike 3
Finally, a lot of biking! This was the meat of the bike route, a bunch of checkpoints across a long distance with climbs and trails before the next run.
We're cyclists, not runners, and once we hit this bike section it really paid off. We were picking off earlier starting teams one by one, up hills, down hills, on more technical trails - it was awesome.
The first segment was mostly road with some big sweeping kind of sketchy at times descents - it was so much fun. Easily found the next checkpoint at a bridge, then it was onto the trail. 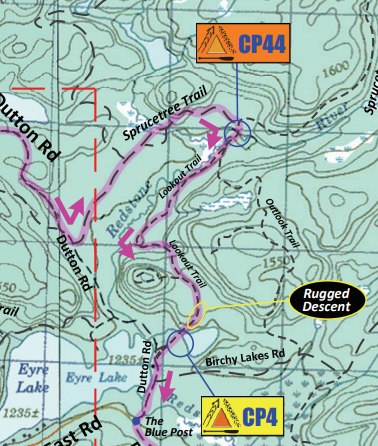 This was the section that had kept me up at night before the race... last year, we had trudged up "Outlook Trail" on a run section, and it was horrible. Steep, rocky, muddy, hellish.
So when I saw "Lookout Trail" was on the bike route, I was thinking this was going to be several kilometers of "pushing a bike".
Fortunately... most of it was rideable!  There was one long climb section that I just couldn't do (nobody around us could either). And we missed the little lollipop section that went to the top, so all in all it was alright. We flew pretty quickly down the "Rugged Descent", again being capable mountain bike guys paid off.
I forgot to mention - due to all the road, I chose my hardtail 29'er instead of my full suspension Enduro bike. That was the right call, I think I paid a big price last year with the heavier bike, for not much technical stuff.
From there we made our way to "Greg Trail", which was pretty mixed - some sections were a hoot, some had water literally flowing across the trail making a muddy/soupy mess. We passed a co-ed team in there who had passed us previously on the first run, which was great! (But temporary)

This one had reasonably simple navigation of road-then-trail, but we managed to first go down the wrong road (fortunately for only about 100m).  The co-ed team that we passed passed us during that oopsie, then we passed them on foot (I think the guy had an injury - guy if you're reading this, you can confirm!)
We went up the road... up... UP... then hit the trail and it was just a wall ahead of us. Rocky, steep, no way to run most of it, straight up to a lookout.
Ran most of the way back down and to the checkpoint - and the co-ed team passed us again! For those keeping score that's the 3rd time.

We passed the co-ed team in transition, because we do that really fast and most teams... don't! We don't fiddle with anything, just punch out and go... lessons learned over the years.
I had a huge second wind here and felt really strong on the last bike, first from being chased but even as we distanced the other teams I just felt really good! At 5h in that's a big win, right??
Then... we missed a turn. Somehow. It was a really strange trail junction, unmarked, but going straight looked right - until it petered out to nothing. It was only a 50-100m mistake, but in the process another team caught right up to us.
Fortunately we had enough to fend them off and get to the finish!
Whew.
Done!
In the end, the missing maps maybe cost us that one miscue on the run, but not much else. We still had maps, just not annotated, so it wasn't the end of the world.
Then we get back to the van, and what is sitting on the ground?  The run maps.
How. HOW!? We looked everywhere and they were definitely NOT on the ground next to the van!!!
The only thing I can think of is maybe I set them on the roof, and they blew off???  Or someone else found them? But how would they know they were ours?
Mysteries of life.
I'm incredibly happy with finishing 2nd in the division - it was a brutal year, and just overcoming it all to have any kind of athletic achievement blows me away.  I'm 100% reenergized for next year - ready to start training now and kick ass!!!
Posted by jonovision_man at 12:41 PM