I'm a week late but better than nothing, right!?

What a day, what a course!

For the first time, this race moved to Haliburton.  This meant all of our old area knowledge was useless (not that it was of all that much use before!).

This part of the world is so beautiful, though.  View from the finish!

We started by canoe on the lake in Haliburton.

We had left our bikes across the lake - so I was kind of hoping it would be some kind of point to point... but instead we paddled around 2 lakes and a small connecting channel.  Very pretty, flat water.

As seems to be the case every year recently - we finished second.  Our boat is fast, but the guys that beat us are clearly stronger!  But we were at least close.

The only new thing this year was collecting information about future checkpoints in the race from the buoys on the lake.  I took the time to write down 2 of them at once, which in a wet canoe wasn't the easiest thing - but it all worked out alright!

One thing I screwed up - I had an extra bottle of Gatorade in the boat that I had meant to take on the run.. I forgot it.  This was bad.  Very bad. It was too hot of a day to be light on fluids.

We ran around the lake over to what appeared to be a conservation area of sorts.  It was pretty, lots of well defined trails.  We had very little trouble finding the checkpoints, but at this point the heat was getting to me...

This is where the eventual winners got past us - they ran so fast, some of the volunteers thought they'd cheated!  But we saw them on the trail - they were just bloody fast.  Meanwhile we were walking some of the uphills (OK, most).

Still, we hit the bike in pretty good shape, I think 3rd.

This one started out on some road/sidewalk, but quickly changed to a long rail trail section.
This is part of the rail trail we rode last year - see my report here!

Flat hammering, which I'm usually great at.  I had a tough time keeping up my teammates pace, though!  I think it was just the heat?  I wasn't feeling great at this point.

... and my fluid situation was biting me.  We weren't even half done the race and I was into my last bottle.  Dangerous situation.  I was trying to go easy on the fluid, but stay hydrated - mission impossible!  I started asking my partner if he'd have any extra he could lend me if I needed it.

A few climbs on a small paved road and we were finally at the next run.

This was short and pretty easy.  Trails were a little funky, as were the checkpoint locations (at the top of a cliff thing and on a beaver dam??).  We saw the team that eventually won in there, and we'd assumed the other team we were always chasing was in there somewhere... based on the fact there were 4 bikes left at the start of the run!

Best of all... WATER!  I hadn't expected water on the course, so this was a huge relief.  I guzzled down a full bottle and filled up the other one - I was now flush with fluid and ready to rock.

We got back on our bikes.

This race was so easy to navigate that I had paid zero attention to this checkpoint.  The bike is marked, how hard could it be?

From the map I thought the little road we had taken to Run #2 wasn't really a road - just a driveway - and that the bike continued on the road we'd started on prior.  So we climbed the lonnnnng climb back up to the road, turned, went down some hills... only to get to a complete dead end.

We doubled back now realizing the error and back to the checkpoint, just as another team of 2 guys was leaving ahead of us.

This was my favourite part of the entire day.  Beautiful winding hilly narrow road/ATV trails.

But those hills... wow.  My teammate struggled a bit here, which I was mildly thankful for as I needed to recover.  I felt great the rest of the race!

We passed a team that had split up (which is against the rules, I might add!).  The one guy looked like he was getting his ass kicked by the heat, other one blasted ahead without him to the checkpoint.  Pretty sure they were father/son.  Kid, you shouldn't leave your old man out to dry like that!!!

We caught one last team on this hill - it was a team of 4, so not in our category, but still felt good.

Managed to ride the whole thing while others walked.  Strava says the road section averaged 8%, but felt much worse!  And after that it turned off into a rough trail climb, that I'm sure was steeper and was definitely tougher.  At the end of a race it was a widow-maker!!! 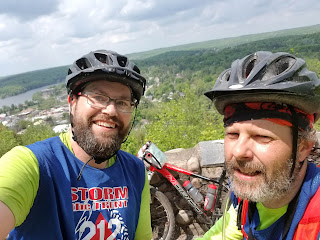 The top of the hill!

We managed 3rd in our category (Team of 2 Male) and my error didn't actually cost us anything better on the day - so that was good.

Run checkpoints were a bit too straightforward for us... other teams are great runners, so we need something that throws them off haha.

The bike was sufficiently awesome.  Rail trail was a nice touch - I'm sure a lot of people haven't experienced that.  Hopefully they realize it's part of a huge connected rail trail system that extends as far as Uxbridge, Lindsay, Peterborough!

I'd love to bike on singletrack MTB trails, but those back roads on the way back to town were just as great!  Winding, hilly, rough, everything you need to put a smile on your face.

All in all a great, well-organized, fun event.  I'm certain we'll be back.