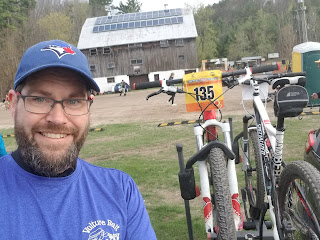 We did this as a tag-team.  8 Hours of alternating laps with my teammate. I did the even laps, being in worse shape and slower... thinking being if we had time for an extra, he'd do it.

I love the format.  Nobody finishes last, as everyone of all abilities are on laps at the same time.  Sure, someone's on their 4th lap while someone else is on their 8th, but they still finish at roughly the same time.

The only problem - because it's laps and you have mixed abilities, there is traffic.  Just takes some getting used to, when to let people by, when to pass people, etc.  It's a balancing act - you don't want to spend your whole race taking an off line.  And just like my previous 8 hour, 90%+ are awesome about it, 10% or less are jerks or fail to call out what side they're passing you on, etc.  I'll focus on the 90%.  Mostly it was great.

I loved the first ~6km of the course, and loathed the last 2km.

It started with a long steady climb, which was alright - I'm good at that kind of thing.  Then it alternated between single/double track - mostly flowy and fun.

Right about the halfway mark was another long steady climb - again, not bad, find a gear and steady up.   And some more nice flowy singletrack...

Then it got rough - and rougher as the race went on.  Some singletrack, but the sand really started getting dug up, and by the end there were sketchy roots and corners everywhere.

The last 2km were horrible.  A long steady climb that lead to a steep doubletrack climb - I didn't make it up without walking... and after a short downhill a horrible switchback-laden sandy rooty steep climb.  Again, much walking.  More on that below.

Finally a really cool descent - at first.  But every lap it got a little more rutted and by the end it was just sandy and horribly difficult.

(I should preface all of this by saying I've only been on the mountain bike once this year so far... which was a mistake!)

Lap 6 was going pretty bad too, and then my chain went kablooey.  I fixed it pretty quick, maybe 5 minutes?  Had a quick link and the right tools.  Note to everyone!

... except... I accidentally routed the chain wrong, over this little black tab instead of under it.  Shifted like hell the rest of the lap.

Thanks to the help of the team next to me - I was able to fix that while I waited.

Waiting was interesting.  Every lap I'd have about 40 minutes to refuel and chill.  That lap I spent working on my bike, but still felt good starting each time.

Lap 8 is when things started to come apart.  In those last 2km my cramping got baaaad.  On the last downhill I put my foot down in the sand - and my leg just locked straight.

I spent the break after that lap trying desperately to stop the cramping.  Nothing helped - I walked, I stretched, I laid down, it was awful - I wasn't sure if I could continue.

Finally... it was my turn... I went back for my 5th lap (our team's 10th) and told my teammate I was cooked and wasn't likely to do a 6th, if I could even finish this one!

Lap 10... I spun it out.  Cramps actually subsided.  I kept the heart rate low, made sure not to put in any hard efforts, and walked a bunch of the hills in the last 2km.  It was tough and slow (7 minutes slower than my best) but at least I got through it!

After that I actually felt pretty alright.  Cramps subsided, I ate and drank some stuff.  So I decided WTF, I'll do the last lap.

Lap 12 - I had about 55 mins to finish this one - figured I'd mail it in.  It ended up being my favourite lap of the whole race - I felt good, there was less traffic by this point, I just enjoyed the course for what it was.  And in the end it wasn't even my slowest lap - the cramps kicked in again, but not as bad, and it ended up being my 3rd fastest of the day (of 6).

All in all a good day.  Tough as hell.  But we figured some stuff out and with more training I figure I'll be alright. 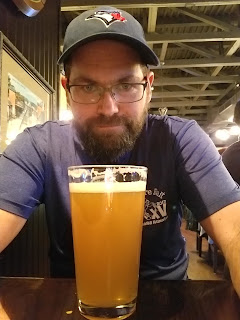