24 hours of laps of a mountain bike course.  Most laps wins.

There were a bunch of different categories - we were a team of 2.  One person rides, the other rests, rinse, repeat!

We had done the Epic 8 Hour a few months ago, similar format - but the extra challenge of night riding and lack of sleep was going to be new...

We got there with a few hours to set-up and ended up with a pretty nice set of digs.

I mean it's nothing compared to what some folks were rocking... RV's, cooking stoves, etc.  We also didn't use the tent much at all - the canopy things was way more useful.  Nobody wants to be in a steamy tent if they don't have to be.

My teammate did the first lap - it had an extra loop and a lot of traffic/waiting, sounded kind of crappy.  Similar to our previous experiences at the 8 hour, just so many riders and not a lot of real estate early on.

The rain subsided early on, and we wouldn't see much more than a few drips for awhile.  Course wasn't too bad considering!

My turn, and my first look at the course.

I loved it!  The trails were beautiful, so much flow, everything was ride-able start to finish.  A few hills with some pop, but nothing quite as tough as the 8 hour.  Lots of fast double track too, gave good opportunities to fly down hills, spin, recover.

The only thing was my crazy high heart rate.  I wasn't pushing but it kept going waaaay up into the 180bpm range.  I don't know why.

Second lap - felt a bit of a burn, but nothing too bad.  Heart rate still bad, if not worse.

Started to feel the first signs of cramping early on in this lap, which was ... unwelcome.

I've been having cramping problems a lot on these longer distance MTB races.  Just so many muscles get abused in so many ways.  If I'm too tense or panic in a corner, I tend to get muscles locking up, and it can be bad!

Fortunately I was able to stay light and spinny and recover - and the rest of the lap went great.

By this point I had eaten a lot of Cliff Shot Blocks and was good and tired of Gatorade.  Note to self for future: bring better solid food. 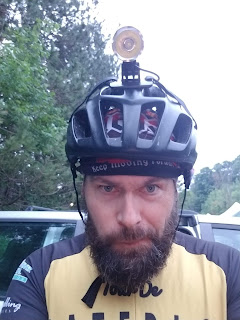 Night riding was tough.  We'd done a test run last week, but on a relatively unfamiliar course it was a different story entirely.  And the terrain was tricky now, some corners were pretty beat up.

There was also a lot of traffic now.  Seems like sundown brought out the speed demons - and they seemed to hang together, so when you had to let one person by there were a few others right behind them.

The freakiest thing to me wasn't the single track - I did alright on it.  It was the fast double track sections!  So many times we'd bomb down a hill and up the other side, but in the dark you just couldn't see.  I would still bomb down the hill but without being able to actually see!

It was fun, a bit scary.

I needed solid food so I bought this.

It was touch and go whether I could digest it in an hour.  I more or less did.  Winning.

I felt marginally better.  I know my pace doesn't reflect feeling better, but I was really pacing myself by now - lots of spinning and taking it easy, not pushing on anything.

My teammate had trouble riding in the dark, combination of poor night vision and not having a strong enough helmet light (note to anyone - the helmet light should be your strongest one, as it points where you're actually looking!).

So after a rest I took on what would be my final lap.

I felt pretty good at the start, but fatigue and darkness really caught up to me.  It was spitting rain, my glasses fogged up - so between the night and the fogged up glasses I had a hell of a time seeing anything.

By the time I finished the lap, it was pretty much light out... so I made it to morning at least!

We took a look at the forecast - horrible rain - and called it a day.  We were really doing this for fun/experience, and it was not going to be fun anymore!

Edit: Looks like the race was called off before 24h!  Rain was really bad.  So we didn't miss as much as we might have thought.

I don't seem to need sleep.  I felt fine on the 4am-6am lap - totally surprised that the lack of sleep didn't impact me more.  I was fatigued, but it was from ~9hours of exercise.

Food - I blew it.  I brought a bit of solid food but not nearly enough.  Would really have liked more real food - the burger worked (luckily) but that was risky.  Need good digestable solid food.

Team of 2 - kind of sucks.  It's just so much riding, and no rest.
Edit!  Team of 2 doesn't suck as bad as I thought.  We finished 7 of 21 teams, and looking at the results most of them took at least one break (a lap that is 4-5h means they weren't riding for a bunch)!  I just assumed they were going balls out straight through - but I guess those were mostly bigger teams I saw out there.  Another lesson learned - rest when you need it and stretch the effort out to 24 hours.  More fun, and maybe more laps?

Everyone in big teams was having a lot more fun, drinking beer and sleeping and stuff.  The whole event was more like "camping with some mountain bike racing".  Lots of families and friends getting together, pretty cool if you like that sort of thing.

Mountain Biking - I think I'm pretty good at it, but when you see guys who are ACTUALLY great at it... wow.  They just carve the trails without a hint of hesitation, carrying so much speed.  It's amazing.

Posted by jonovision_man at 1:10 PM