What an amazing day.

Based on wateroffice data - we had 40cm (over a foot!) of extra water level on the river.  The flow was many times last year... so any trouble we had bottoming out on sandbars last year was gone!

It rained on the way up, but the entire race was dry and wonderful temperatures ... 15C or so?

And no wind!  The lake that was wild and hairy last year was placid and peaceful this year.  Fewer boats, too, being earlier in the season.

Our Race - The Start

We hung back a little at the start, choosing to start out behind some boats we knew would be faster than us... that worked well, we had a good clean start.

Last year we went out really hard trying to keep up with people we probably shouldn't have tried to keep up with... this year we were a bit more sensible, but our pace was about the same for the first part before the river.  Steady!

The river was so high, and the current was noticeable right from the start.  We did our best to read the water and keep out of it, but watching the real pros as they went by gave us a lesson we needed... stay close to the shore, hug the inside of the turns (without getting TOO shallow though)... we did our best.

In one uninspired moment, we decided to go between a dead tree and the shore .. and a slight bobble with the steering put us into the dead tree!  My buddy got a little branch, I got nearly skewered.  Ooops.  I still have a chunk of dead branch that landed in the boat, guess I'll keep it as a keepsake.

Could have been worse, though, as the kayak behind us who followed our line flipped!  I yelled back asking if he needed help, but he was up and didn't respond (I later realized he couldn't hear us!).

A few corners we messed up, getting too close to the inside where the sandbars were shallow - but for the most part it was a really nice paddle without bottoming out all the way upstream.  Just slow with the current...

I don't know why we were so slow downstream last year??  But this year it was full gas, so easy, and we were paddling well and steady.  Kept it in the middle and took advantage of the current where we could, it went great.

We caught and passed the only boat we could (then promptly steered into a tree and had to do it again).  We seemed to have made up ground on one other boat, based on where they were when we came out into the lake (vs the turn-around gap) - but couldn't dream of catching them, several minutes ahead.

Last year the wind had kicked this up into a lather, and then the boats made it that much worse...

This year?  Placid!  (Almost) no boats!  We were about 1m30s faster over this little hop over to the Muskoka River. 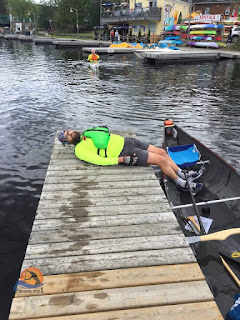 We had a kayak behind us but nothing else in sight (and I stopped looking).  Maybe they could see us but we knew we were good.  The boats ahead were just in eyeshot, but it was a several minute gap late - so we muscled through to the finish steadily and feeling pretty darn good.

Despite my appearing passed out on the dock - I was actually just stretching out my abs (which had given me some mild cramps mid-race!).

All in all just an awesome day.  The patio in the background has beer, I like beer, great way to unwind and watch the later finishers...