We needed somewhere to get a 3 hour paddle in, and with the wind Lake Ontario was out... so we decided to check out the Scugog River.  There are two tributaries that looked promising so we set out on one... the East Cross Creek.

Here's the Strava of our paddle.

This is at the south end of the Scugog River, as it's starting to widen and form Lake Scugog.

We expected to go a few kilometers up the creek then turn around and try the other creek thing on the west side of the Scugog River - but to our surprise, it was clear, not weedy, and best of all deep!

Not far from the put-in point / bridge we saw the remains of an old railway bridge - just the wood foundation supports are visible, and the old causeway thing. That was about the only civilization related thing we saw the entire paddle!

It's all considered "wetland", so mostly it was marsh, more marsh, and then some marsh.  Oh and it's very twisty.  A couple of herons kept us company pretty much the whole way, kept flying up and going upstream - nice big birds.  If you like birds. 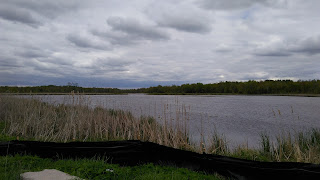 The water wasn't flowing much ... almost stagnant?  So I'm guessing in a few weeks it's going to be stinky/skunky and weedy.  But for us it was clear and great.

Also water levels this year are pretty high, so it could be that we lucked out.  But we had no problem paddling, only hit bottom a couple times with the paddles.

In the end we went 11km upstream then came back down - 22km total.  We could have gone further but we were trying to keep it to 3 hours.

The entire time we saw one other paddler - a dude in a kayak - and he was within ~3km of the put-in point... so I don't think this is a very popular destination.