But first I really want to give kudos to the organizer - I had a few complaints about last year's race, the disorganized canoe start and the outdoor freezing in the rain BBQ being the biggest two.  Both fixed this race - they moved everyone forward right before the race started to ensure we had a proper start line, and they moved the BBQ indoors (thankfully, since it rained again!). 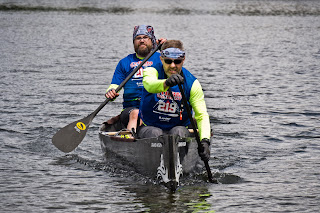 We were once again in the Team of 2 Males category.

Canoe start was a mass start again, which can be sketchy... but we managed to lurch forward enough to get out of the main throng of boats in the first minute.

We quickly found ourselves next to a team we always seem to be around... I'll call them "Team To Beat".  we actually bumped into each other a couple of times picking lines!  It was foreshadowing I think.  (more on that later!)

Within about 5 minutes there were 3 boats out front - a solo kayaker, Team to Beat, and us.  After this the canoe was mostly uneventful - up the river to the turnaround (which was the full 4.5km distance this year), punch in, downriver to the finish.

Downriver was a little sketchy with boats going both directions, but we managed to find safe/good lines through the traffic.

By the end of the canoe I'd say we were about 30-60s behind Team to Beat (and I'm not sure how much behind solo kayak) in a very solid 3rd.  Not sure how far the next boat was behind but it was minutes.

This was all on-road between the canoe to the first trail section at Warsaw Caves.  Entirely uneventful.  We did catch Solo Kayak as they had some kind of bike problem.

We had a good strategy here - pick off the 3 checkpoints on the easy loop first, then tackle what looked like the potentially tricky short checkpoint when there were more people looking for it.  A lot of time it's like ants when it gets busy, folks just marching toward the checkpoint making it obvious where it is.

This worked great.  On the way around the loop we saw Team to Beat going the other way - it felt like we had put some time into them, which I'm guessing was while they looked for Tricky Short Checkpoint (once splits are up we can probably confirm this!).

We hit Tricky Short Checkpoint without any trouble thanks to the swarm of other racers.  Things were looking good!

Back at the checkpoint to switch to the bikes and we were first!  Except... as we were about to leave another team (who I'll call "Young Guns") swooped in without having to change shoes and actually got on the road before us.  Grrr.

As we left we saw Team to Beat coming to the checkpoint, so we new they were maybe a minute behind us.  Then we saw the Young Guns stopped, looking at their map... hit the road, now firmly in first place of the entire race.

We haven't lead a lot of races in our lives, so this was a pretty big thrill!

Young Guns closed the gap, but didn't pass us - I think they were relying on us for navigation a bit.  We hit a short off-road muddy section with a checkpoint by a pond - lucky for them I spotted it as they were about to go right by!  I was hoping we could get in and out before Team to Beat showed up, but alas, it wasn't to be - they saw us and we tipped off where the checkpoint was.

Back on the road, Young Guns fell back a bit.  Still leading at the end of the bike... yikes!  Could we actually win this thing???

(I felt like someone with a slow canoe with killer run/bike splits would show up at any minute and blow by...)

As we rolled into the checkpoint both Young Guns and Team to Beat showed up!  Again, they were able to pass us while we changed shoes.  That's something we'll have to figure out, it cost us precious time today.

I don't know where Young Guns went at first, the only team we saw when we ran was Team to Beat.  They had about 10 seconds on us, then 20s, then 30s... we were pretty close throughout but they were chipping away.

The weird part came when Young Guns showed up out the blue, then were following us from one checkpoint to another.  Then, instead of continuing around what I figure was a pretty obvious loop, they turned back.  I have no idea what they were doing - and we didn't see them again the rest of the race.

Bike #3 and THE SWAMP

Back on the bikes, and Team to Beat was nowhere to be seen.  They were gone, they just had more running pep than we could muster and had put some minutes into us by now.

A short road section gave way to a gravel/mud road and trails in a Conservation Area.  It was pretty cool and suited our riding skills I figure (especially my partner as he's a more technical rider than me generally).

We were looking for the checkpoint that was described as being at "swamp, on trail".  We came around a corner, and there was the swamp... and the checkpoint... and across the swamp, Team to Beat already leaving!  Gah!!!  I figured we didn't have much chance at that point.

THE SWAMP was literally chest deep, and I'm 6' tall.  For the kids in the race it must have been a swim, or a piggy-back ride!  It was crazy.  The only good thing was the bottom wasn't mucky, more rocky than anything... pretty sketchy though!!!  I floated/pushed my bike through the gross swampy nastiness as quick as I could, with my teammate in tow.  Looked back, nobody even starting the swamp, so I knew we had a pretty decent gap.

After this there was more really good trail, rocky/muddy, some sketchy mud bogs, but we really plowed through it well.

When we emerged on the final road section there was noone to be seen.

At this point we actually didn't know if we were in 2nd or 3rd... Young Guns could theoretically have beat us out of the run.  I didn't think they had, but who knows?  We felt a podium was a good possibility though.

A police officer at an intersection stopping traffic for us was kind enough to inform us there was only ONE team in front of us, so now we knew we were in 2nd.  Looked back again, long road behind, nobody.  But ahead I could see them now...

I still thought they were too far away.  We hammered it.  I had really good bike legs for this kind of riding, just turning a big gear and go.  My buddy drafted, and we started clawing back time.

We flew into the last parking lot neck and neck.  Ran our bikes at a ferocious pace over to the racks, racked them (poorly).

I wanted so bad to have enough in me to sprint to the finish but I was cooked.  C-o-o-k-e-d.  They are stronger runners and it showed, even though they were probably feeling pretty cooked themselves, they pulled away.

We entered the arena where the finish line was...

... and then it happened.  They ran right past the timing checkpoint.

My teammate lunged for it and checked in first.

What just happened.  Had we just won the race on a last-second slip up!?!?  They realized their mistake, came back and checked in.

They looked dejected, we were elated!

But then the organizer came over... asked who came in first... apologized for not having someone manning the check-in...

We didn't protest, they were truly at the finish line first.  It seemed fair that we finish second.

The organizer gave us the beer give-away prize anyway - and we got our 2nd place medal, so I'm good! 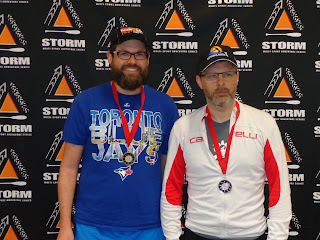 It was just amazing to be fighting for an overall win like that - I've fought for placings and age groups but this was the entire race.  We were just spot-on on our navigation and plan, didn't miss a beat all race.  Except the shoes... but we'll figure that out!

Great race, great event, will be back next year!

Wait - you did all this for BEER?!

Am I to understand you had to ride after submerging your bike in swamp water? That's some wacky Sh|t.

Yep swampy bike and bike shorts and everything... hope my shots are up to date! Beer mmmm

Really enjoyed your commentary! Sounds like you and your partner don't mind all the crazy biking conditions. Looking forward to September and reading about your next 80km canoe adventure!