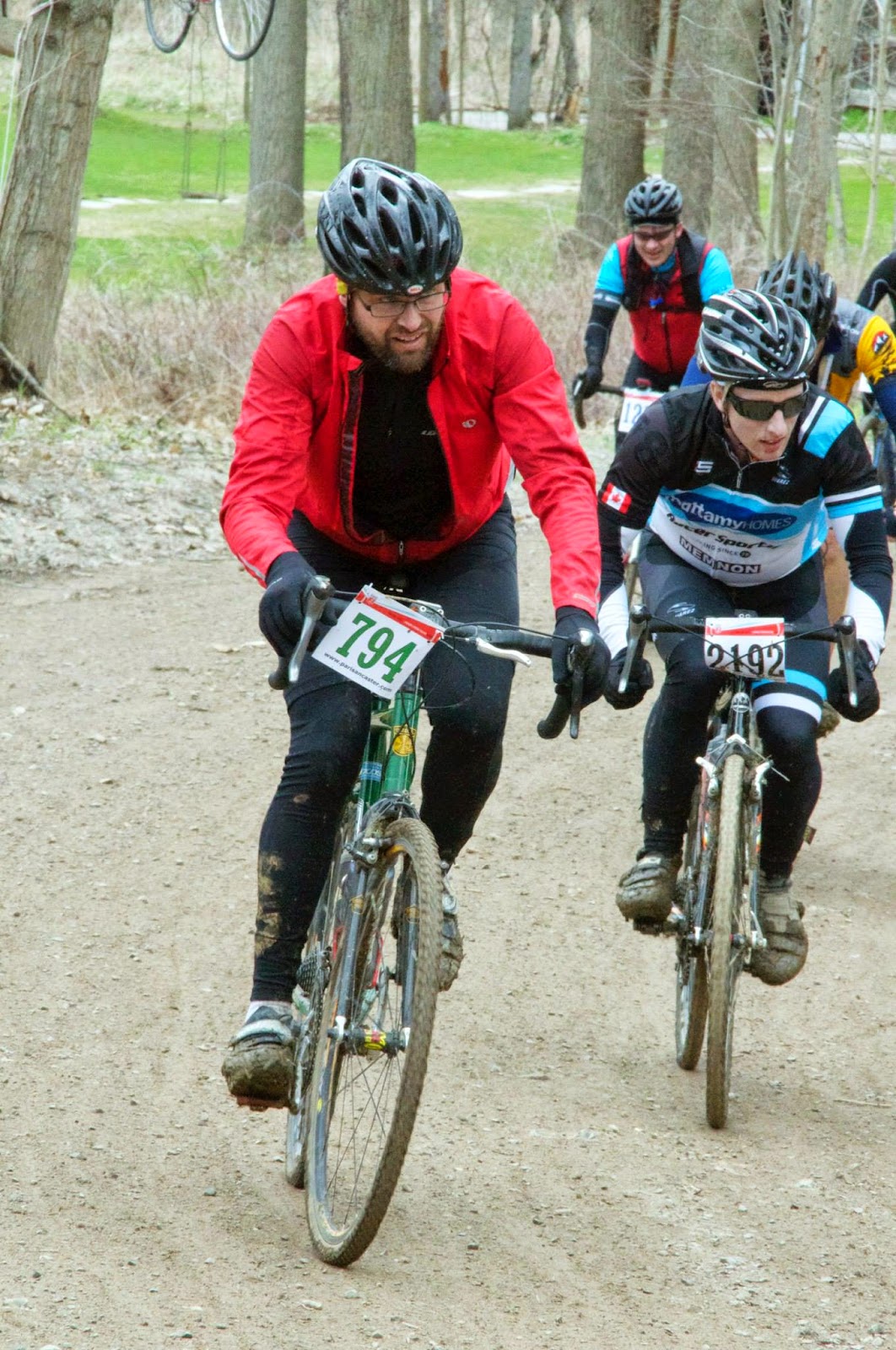 They have been trying to add sections to this race for a few years, and this year it finally dried out enough to do it.  70km instead of the old 60km... and I felt ever millimetre.

The usual mad rush to the rail trail.  We were seeded pretty far back, so took a little to get around some of the people who shouldn't have been in Wave 2.  I managed to hold wheels for most of the rail trail section, never going too far into the red, so it was a good start.

This one is always tough, first real test of the legs.  My legs were OK... I didn't power up the hills, but I didn't get completely owned either.

To The Highway and Second Off-road / Farm

Crossed the highway, did the usual hike over the burm/ditch thing.  The off-road was much drier than it has been in the last few years, was easily ridable.  Across the farmer's field was a bit spongey, but after the last few years I wasn't complaining!

Big gravel/dirt road loop around an Orchard.  Conditions were fine, just sketchy enough for me to have an edge over some of the people around me.

This is new... instead of going directly to the second rail trail, we instead did a big square north to another farm, with another dirt trail type thing around it.  Very neat section, actually quite flowy and fast.  I got sick of the road pretty fast, though, especially into the headwind!

Unlike the first rail trail, this is a poorly/non-maintained mud path.

This is where my race ended last year with a broken dérailleur hanger - this year, no problems.  It was still mushy and wild, but I kept out of the sticks and crap that hurt me the previous year.

Pretty uneventful, although by now I was feeling a bit of fatigue.  Which was unfortunate as this is barely halfway.

There's one horse farm we used to do, but we skipped it this year.  It was a muddy spongey mess previous times, so I didn't miss it...

I don't even know what this is - just a long laneway type thing, almost looks like a road but it's really muddy and messy.

This farm is really nice, but very energy-zapping...    slows you right down as you sink into mud.  Oh and there are pretty rolling hills!  Of energy-zapping squishy turf.  Tough stuff.

Back onto the same rail trail, then ... another farm.  I had no lucky this year hitching a ride and getting a draft, others seemed to get onto my wheel more than I was able to return the favour.

Farm was fine this year - again, drier than usual.

This felt like it went on forever.  All alone for most of it, and by now my energy just wasn't there.

Rutted gravel road through a farm... uphill.  Felt rough, but everyone around me looked rough.  Misery loves company!

There are two of these, both usually nasty.  Not this year!  This one was totally ridable, top to bottom.  Well, not for a lot of people I blew past, but a few of us did it.

This one wasn't ridable... usual muddy soupy mess, walked/ran down.  Lots of branches and logs and stuff too, pretty hazardous.

By now my legs were really protesting.  I could feel the early signs of cramps, but I was managing that well.  Super low cadence, toughed it out up the hill, and most importantly I stayed on my bike and didn't walk.  Result!

Crossed the finish line and... someone's toddler comes toddling out in front of me!  I smoked by brakes, and did a last minute evasive manoeuvre that thankfully manoeuvred around the kid - very close.  In my foggy haze I unleashed a tiny bit of profanity that I'm regretful of, but geez lady, watch your damn kids if you want them to, you know, live.

I am provisionally 637 of 1298 riders.  So slightly better than mid-pack.  Kind of what I expected, haven't had a great off-season and I'm behind (and fat).

It's actually my worst placing since my first P2A (not counting the last two seasons where I had mechanicals).  So that's not great, but oh well, I had fun and didn't completely embarrass myself, so it's a win.