I was on a trip back home to Alberta, so had a chance to rent a mountain bike and check out the Canmore Nordic Centre trails. 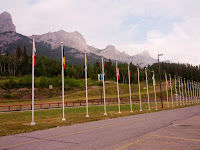 A fair amount of singletrack with lots of variety, from nicely groomed somewhat flowy trails to nasty awful rocky/rooted borderline unrideable trails.
One of my favourites was the long downhill section called "Killerbees" (and before it, the slightly less fun but still entertaining "Backdoor").  Awesome banking, some neat little bridges, and fast downhill!  Mostly smooth, packed and fast - the flowiest trail of the day.

The only downside - the trails to get up to the start of Backdoor (the Albertan and Nector Noodle) were the worst ones of the day... lots of rocks, roots, sharp climbs, just unpleasant.

The "Long Road To Ruin" was also very cool.   As the name suggests, it's a long uninterrupted singletrack.  Nice trail, ridiculously beautiful views.  Some really neat sections going along a steep valley, too.

Again, there's a downside... if you go east to west on "Long Road to Ruin", you are mostly descending and end up at the bottom of the bottom - no way to get anywhere but to climb!  I used the "Georgetown Climb", which was just a long steep arduous climb.  A better option might be to take the "Georgetown Interpretive" route, it's doubletrack and the climb out at the end doesn't seem as bad (but I only went down it, so... good luck!).

It was a cool experience mountain biking in the actual mountains!  The views were stunning.

The trails were mostly not quite as groomed/nice as what I'm used to back home in Ontario - lots more roots and rock, it's left in a more natural state, which I don't find quite as fun to ride.  It's just different, probably folks prefer whichever they're used to.

If you go, buy the trail map.  The signposts are almost entirely useless - they show only the immediate vicinity of the sign, rather than the full trail system!  I spent a lot of time pulling out the map.  There's also a relatively up to date version here.

I rented from Trail Sports right at the mountain.  $55 for the day - not bad.  The guy on the phone said not to bother reserving, there were lots of bikes in all sizes all the time - except when I got there I got the last Large (and this was at 9am)!  So if you really want to make sure you get a bike, reserve it.  There was also a bit of a snafu with the pedals - the guy installed them wrong (I suspect) and one snapped off on me!  Fortunately I was only 1km from the place, they swapped out the bike and I was good to go.

Oh and there are bears.  I didn't have bear spray, didn't see bears, but they do rent it at Trail Sports for $5/day if you want insurance.
Posted by jonovision_man at 4:50 PM