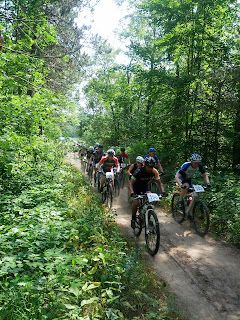 That was a blast!  Thanks to the race organizers... (link to their web site).

I watched the 60km guys start, took a few pictures.  It was already stinky hot, even standing in the shade I was sweating.

Started about mid-pack.  Last time I did one of these races, I had a really bad day, so in my head I was thinking "back of pack".  I was pleasantly surprised not to get passed much in the early going, and felt pretty good.  Found a group of about 4 people (it changed a few times!) that I was hanging with in the early going, tried to keep within myself.

The first 15km flew by.  The trails were beautiful, singletrack mostly but very flowy and fast.  Rumours of sand were greatly exaggerated - there was the odd bit, but mostly on the wide double-track parts, and even then it was easy going.

I managed to get by a guy I had been chasing for some time, just as we got to the water station.  Good thing - there was only one jug to refill your bottle from!  He had to wait while I refilled...

The coursed change significantly, from fast and flowy to tricky and tight.  The trails weren't as well groomed in this section, and maintaining a good pace was tougher.

Worse, there were lots of steep climbs, some short, some longer.  I was cooking in the heat, and when you climb you slow right down and put in your biggest effort.  Top effort + no wind = bad mojo!!!  I really started to suffer in this section, the heat took it's toll.

Crossed the road back to the original section where we had started, and voila!  Fast and flowy again.  Quite a few climbs, and by now I was really feeling it.

Not too long in, I saw the girl who had passed me again.  That was a surprise, I'd thought she was long gone, but I guess we were all suffering by now.  I stayed back a bit, scared to push too much with around 4 or 5km to go and the hottest part of the day baking me.

Until... I noticed a guy was catching me.  There was a bit of a switchback, and I could see him - in fact we made eye contact!  I knew he would immediately get a rush from that and want to catch, so it was time to throw some caution to the wind and push.

There was a series of short steep climbs, I managed to catch up to the girl and pass her.  Never saw either of them again - now it was on!  Ended up catching one other person (but I don't think he did the whole race, based on his pace...) and then flew by the 1km to go sign.

And then - yet another rider popped up in front of me!  With the end close I had to go for it... I pushed and pushed, closing the gap a little at a time.  Just as I caught him there it was... the finish line!  I had about 50m to go, and no room to pass... so I moved slightly off the course into the grass and sprinted like mad, pipping him at the line!  Winner!!!

Well, more specifically I was probably mid-pack, but hey, I beat that guy.  Felt like a win.  Don't take it from me! 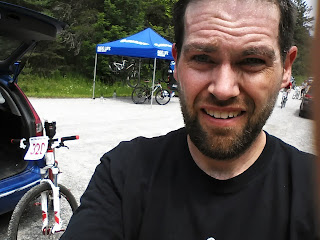 I was cooked.  It was just too hot for me, pouring sweat.  Good thing I got it done in 2 hours, any longer and I'm sure I would have found myself in some pretty dark places.

Not sure exactly where I finished, but just being among people and getting to race a bit is a huge improvement over last year's disaster.

If you get a chance, check it out.  It's a bit of a drive from the GTA, but worth it.

My Garmin Data from the Race - if you go, I'd suggest sticking to the west side of Beagle Club Road.  Nicer trails.  And try stick with the singletrack over the doubletrack if you don't like sand.