So that was probably my most disappointing race ever...

I have no idea what happened - I was just slow.  Very slow.  Any time I got anywhere close to target race pace, my heart rate went crazy... and my pace for most of the race was a full minute per kilometer higher than what I had targeted.  Something was really, really not right. 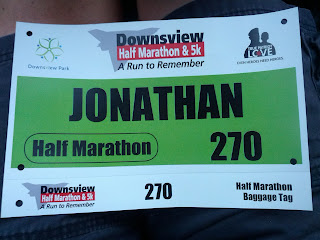 Downsview 1/2 Marathon.  First time event, and wow did they draw a great crowd!  Almost sold out, and some very nice touches.


The bad:
So a few things they can improve on.  All in all it was pretty decent, though, I would do it again.

Horrible.  Confusing.  I have no idea what went so wrong.

I started out near my target pace of 4:30-4:35/km.  Really early on, I noticed my heart rate was quite high - into the 180bpm range.  This is higher than my tempo heart rate normally, so I was a bit confused, but chalked it up to race day nerves or something.

But it didn't come down.  In fact, it went up.  When it hit 185bpm and I was getting to the 6km mark, I knew this just wasn't going to work... I dialed the pace back, but still felt awful.  I felt like I was in full blow-up mode at 7km!  Crazy.

I finally backed waaaaay off, all the way to 5:30/km pace, which is my LSD pace.  Still, my heart rate wouldn't go under 170bpm.  This was really the story to the end, struggling to keep a 5:30/km pace while my heart rate was something I only ever see on tempo runs.

I'm stumped.  Maybe I'm coming down with something, I don't know.  Just a bad, bad day.

Posted by jonovision_man at 2:20 PM

Nice to see you Sunday Jon!

My guess would be that the awesome 10K last Sunday may have really drained the tank. Perhaps you regained enough in half a week for the 7K tempo run Wed PM, leaving the tank close to empty again and then regaining enough during a half week taper to go another 7-9K at tempo pace.

Regardless, not a good refletion of your fitness, just an off-day.

I have the same problem in races: my heart rate is always 15-20 beats faster than the same pace in a training run. Maybe the adrenaline from the race atmosphere?

nice blog mr ironman. here's some photos from the downsview half:
http://anigorotodyssey.blogspot.com.au/2012/11/downsview-park-toronto-half-marathon.html