As readers of this blog know, I had some knee problems at the NYC Marathon in November.  Outside (lateral) knee pain, hurt going down stairs, sounded like classic ITBS symptoms.

Except it wasn't ITBS... the pain was slightly lower, where the fibula joins the knee.  There's a joint there that is involved in knee rotation, and in my case, excessive knee rotation.

Your hips are supposed to rotate, and when they don't then other joints pick up the slack.  In my case, my hips were not budging - when my physio did the test for hip rotation, she said "you are the worst I have ever seen".  I didn't take it personally.

What exactly is hip rotation?  When you take a step, your pelvis should rotate forward on that side.

See this diagram from this Chi Running site: 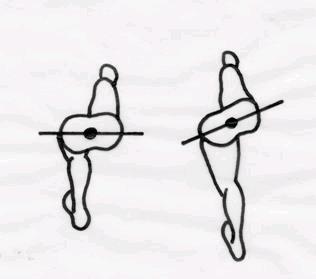 I was running (and walking) like the guy on the left, over-rotating at the knee to get my foot to hit the ground correctly.  The result was an over-used and abused knee joint that eventually tightened right up, tightened up my overworked hamstrings and left me in huge pain.

I had one other problem - my right hip flexor was tight, so I was not taking a full stride back.  This meant my left leg had to hit the ground sooner, adding impact and injury.

Why me?  My massage therapist (I have quite a team now) said it's likely due to the desk job.  Runners beat their muscles up in training sessions, so they have to heal.  When you are sitting, your hip muscles are not extended, they are bent at 90 degrees in their shortest possible position... the result is they heal short and are tight!

What to do?  Simple - stretch.  A lot.  My physio also taped my left knee to force the rotation to go through my hip, and voila, it worked!  I felt like Shakira, shakin' those hips everywhere I walk.

I ran 2km relatively pain-free, which after running 42km doesn't sound like much... but after more than 2 months on the bench, it was huge.