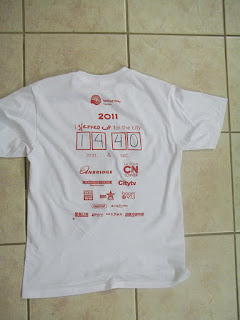 14:40... waaaay faster than I ever thought I could, my previous best was 19:15... but that was quite some time ago, I was heavier and had barely started running.  I figured I'd be around 17:00, but felt good the whole way up and just kept going.

As for technique - I did a few of the first flights 2-steps-at-a-time, but that went from feeling easy to not-very-easy really fast... so I went to 1-step-at-a-time.  I did lap counting every 10 stories, mostly I was around 1:03 every 10, so a tad over 6 seconds per flight.

I really need to call out the organizers, because the way this event was run was really awful.

It was supposed to start at 6pm, we lined up a bit early (around 5:15ish) and were in the front 1/3 or so.  By the time people actually started going, they were at least 20 minutes late, and even then just a smattering of people were allowed to go.

Despite being that early, we didn't climb until 7:30pm.  Over two hours??? Unacceptable... one o f the people climbing with us actually left and missed the entire thing.  About 2/3 of the people were behind us in line!  I can't imagine how long they waited.  There was a wait in the convention center, another wait for security checkpoint #1, then unbelievably another wait for security checkpoint #2.

And then you got to the top... and the tower was packed.  Nobody seemed to know where the lines started for the elevators, people were accusing each other of cutting in line, it was chaos - and took forever.

So for a 14 minute climb, I was there from 5:15 to 8:30pm.  Totally ridiculous, they should be ashamed of the way they ran this thing, amateurish.  This is the United Way - a large organization with well paid executives that should be held to a higher standard, and they didn't even meet the standard of the tiniest charities that run events every weekend.

I will not be back for their climb ever again, if I decide to do this it will be with the WWF charity instead.

Lately, the CN tower stair climb is being used as an endurance challenge. You need strong legs for that challenge.