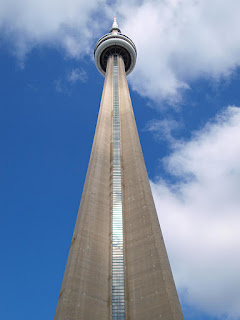 This isn't a race, but rather a climb for charity.  Walk up the stairs of the CN tower to the main observation deck!

1,776 steps.  144 stories.  Piece of cake!  It's only the tallest freestanding structure in the western hemisphere (formerly the entire world, until that Burj monstrosity in Dubai was built!).

Goal?  Sub-18:00.  I don't know where I get that, I don't regularly climb stairs, but I need something to target, and that's as good of a goal as any!

To the top!
Posted by jonovision_man at 6:53 PM

The CN Tower pierces the blue sky. I do not think I have the stamina to climb to the top using only the stairs.