Storm is finally back!

After COVID canceled 2020 and postponed 2021, we finally got to STORM again.

This race is an Adventure Race, and when Sean plans a route, Adventure is often big-A Adventure...

So first off I don't love the new location.  His previous Haliburton courses were great, but we've raced at the Haliburton Forest & Wildlife Reserve "Wolf Centre" before in the old "Logs, Rocks and Steel" races... and it wasn't fun.  The trails are muddy, rocky, poorly maintained, barely used...

Add to that torrential persistent rain allllll week and we knew it was going to be a muddy hell-fest.

First discipline was the Canoe - 6km paddle around a small lake with two checkpoints.

We just did 110km last weekend at the Huntsville 110, but despite that I felt really strong.  We were rocking the marathon-canoe-style paddles and our cedar strip boat, and made quick work of a bunch of better boats with kayak paddles.

I'm not convinced kayak paddles are superior for people who know how to really paddle a boat, and with the strong wind, they had a paddle in the breeze the entire time...

It's hard to know until results are posted but I think we really killed it. Averaged 8km/h in our 17 foot cedar strip!

Before we could grab our bikes, there was the small matter of an 800m portage.

My thought was to toss the 60lbs boat on my shoulders, which I did.  I entirely underestimated the impact on the core muscles going up a hill especially!  I made it 3/4 of the way, then my buddy offered to take over and I obliged...

We didn't lose time to anyone around us there, in fact picked up a bit on some, so while I'm sure some portaged faster we were pretty decent at it.

First bike was a quick whip on gravel roads from the transition area to the first run - nothing to it, settling in, life's good.

This was the one run we actually ran, pretty close to start to finish (other than maybe a few hills along the way.

You could choose how to get to the two checkpoints - we went counter-clockwise, which didn't seem terribly popular (although you don't tend to catch as many people going the same direction as you so that can be deceiving!).

Neither checkpoint was terribly difficult to find, one was right on the trail, one was a little past a trail junction - may have been more complicated if there weren't so many people around, hard to say.

This was a tale of two rides, really.

The first 9km were gravel roads, some tough climbs but very reasonable and easy terrain.

Then there was a section the organizer had labelled as "Rugged Terrain".

Knowing this guy, if he think it's rugged?  It's going to be pretty damn rugged.

And it was.  Terrible trail, for some reason there were giant logs/ties laid across it with 8-12" gaps in between.  With the rain everything was washed out and hellishly unrideable.  Slog slog walk walk.

Finally there was a rideable section, and a chance to use our full-suspension bikes - even a downed tree we could hop!

When we had mapped this out, we knew it was going to be tough - the trail was called "Outlook Trail", and it was over 2km straight up to space.

I have no idea what it was like a week ago - but with the crazy rain over the last week?  It was a muddy hell climb.

We assumed we'd be walking the steeper slopes, but not almost all of it!  It was really tough to get any momentum in the sloppy mud...

The view at the top was beautiful and almost worth it.

Saw at least one team cheating (one team member hoofing it to the top while the other guy turned around halfway) - if you're reading this, you know who you are and what you did.  SHAME!!!

The downhill was moderately better, but still so tough with the slippy terrain... there was no making up time here.

This was a pretty fun gravel bike with a few killer climbs, but everything was rideable.

One section of it was completely flooded - but we knew the road under it was smooth so we bombed through with water over our axles!

So the way this works... there are 3 checkpoints on the "Optional" section.

If you don't do them, you are ranked behind the teams that do them.

Is it optional?  Not really... it's part of the course, and if we didn't do it we knew we'd feel like we hadn't done the full race.

By this point my legs were cooked.  C-o-o-k-e-d.  My partner too.  We were both just struggling with a lot of different aches and pains, I had some cramps (that thankfully never got to the debilitating point, but were never a picnic!".

We did the first km super slow, once again finding ourselves slogging through mud bogs and up steep climbs.  These "trails" are absolutely terrible, never do them for any reason other than "a race organizer made me".

My favourite part of the "trail" was where someone had tried to make a little plank bridge with logs and cut timber to bypass a mud bog (one of about 50 we had to trudge through), but it was slippery as ice and half the timber was rotted out.  Amazing.  I don't consider myself a trail building and maintenance expert, but I can't imagine crafting worse trails than these... I don't know if it's just that nobody cares, or that the terrain is impossible (perma-mud)?

The only tricky checkpoint was the furthest point, it was near a pond that one could miss if one wasn't great at the maps.  But there was a pretty big crowd there when we were around, and it had been pretty well trodden, so not that tough in the end.

We walked what we had to, ran what we could, I fell twice on slippy mud, but ultimately I think we probably did this faster than most of the teams out there.  Calling it a win!

This was a mercifully short ride - I was cooked times a hundred by now.

The only trick here was catching the last checkpoint along the trail back - but it was in plain sight.

Finish with nothing left in the tank - just the way we drew it up!

I'm delighted, really good result for a really tough day.  I certainly had nothing left.

Several teams missed the last checkpoint... Storm posted this with the results! 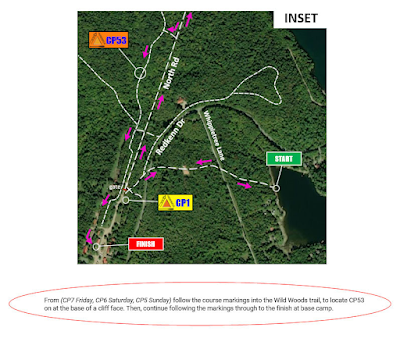 I was actually anticipating some would miss it when we were planning, my buddy missed it in the instructions. But no race day we saw it in plain sight from the trail... so I figured it was easy and nobody would skip it??  But somehow they still managed.  Whoops!  Following the race instructions and reading alllll the maps intently is part of the race, though!

Usually we earn our keep with being clever and reading the maps well, but this one had minimal navigation and the trails were all really well marked.  The checkpoints were mostly trivial, so it was hard to gain any advantage where others might have slipped up.

We paddled hard, we didn't mess up, we persevered and kept it going through all the misery, so I think we'll show pretty well in the end!

One last thing worth mentioning - I wasn't well trained for this (other than maybe the paddle!).  The biking didn't go as well as it should have, I hadn't been running (and certainly hadn't been stair/hill climbing!), so this was a big shock to the old system... really need to purposefully train for something of this magnitude, and I didn't.

And if I never see these trails again?  It'll be too soon.  They're terrible.

Posted by jonovision_man at 5:57 PM