There was once a race called the "Muskoka River X", we did it a bunch of times, but never managed to complete the full course.
We failed quite spectacularly in 2019.
The race was folded after that, but returned as the Huntsville 110 this year!
We had demons to slay, so we came back.
The new race replaced the Muskoka River with the Big East, had fewer portages (only 2!) and more lake paddling.
It also had a new handicap start format, where each boat class started at different times.
The Prep
After looking at when our C2 Stock boat would need to start (afternoon!) we decided to enter C2 Rec.  It meant it would take longer, but we could start in the morning (930am) and finish earlier at night.
We sought out and found a 17 foot boat, a nice cedar strip.  I mean it wasn't that nice... could use a refinish and it's heavy (65lbs!) but it would do.  The best thing is that it's stable as a rock in rough water, which we really needed.
Race maps were released early, marked them up with bearings and distances and were ready to rock!
The Start (1) 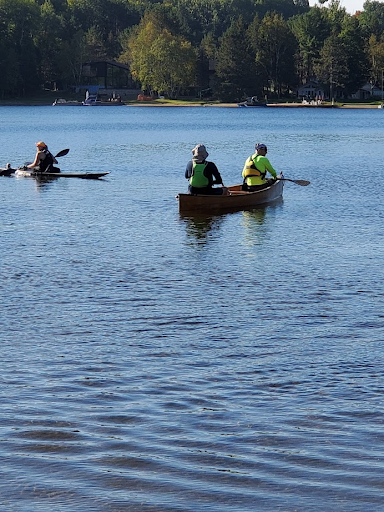 We put in at 9:30am at Fairy Lake in clear calm water.
To our surprise, we were among the lead boats of our wave.  A boat not in our category (C2 Stock Female) was with us at first, but we passed them in the canal and never saw them again...
Fairy Lake (2) was easy peasy, the heading I had was perfect, we had a tailwind, and we showed up to Huntsville (3) ahead of schedule!
There was a support team location there, but we didn't need to stop so early - skipped it.
Everything was pretty uneventful, found the mouth of the Big East with ease, we were cruising!
The Big East
We have paddled this river a few times in previous races and training runs, but this was the worst its ever been.  The water was so low, but there was remnants of high water damage everywhere.  Fallen trees, floating or just under the surface.  And the low water made every corner difficult, constantly searching for a channel with enough water to paddle through.
We did a fine job of it, though, but it took a lot out of me (and pretty sure it took a lot out of my partner!).  We hit the top of the Big East still in the lead, ahead of our estimates.
Our wonderful support team was there for our first stop.  We replenished our liquids and were taking a bit of time, until... the second place team paddled up!  Crap.  Then the third place team!  Double crap.  We rushed out of there a little.
Downstream was a chance to recover a bit, although it was still stressful with all the obstacles and low water.  At this point there was a lot more river traffic, with later starting teams coming up the river as we went downstream!  Oh and flotilla of about a dozen cottager looking people (one of them smoking while kayaking, who does that??) ... we finally got through all of this traffic and the lower half was fine.
Lake Vernon (6)
We didn't anticipate much in terms of waves, but it was pretty gnarly when we hit Lake Vernon.  These lakes really kick up with a breeze!  Lots of motor boats and jetskis (spit) as well, so we had our hands full a few times.
As we came around the end of the lake, we saw another team going the other way... somehow they had blown right by the Big East mouth!  So no matter how rough our day was going to be, theirs was going to be worse - made me feel a little better.
Once we got to the far end of Lake Vernon, the waves were better, and we settled in and were moving really well.  The bottom (7) we weren't so lucky... back into open lake and some really rough waves, the worst of the day, and the worst motorized traffic.  It really slowed us down.
(Unbeknownst to us, between 6 and 7 if where we lost the race... more on this soon)
We finally made to through the Narrows and to the next checkpoint in Huntsville (8).
Huntsville (8)
This was the next support team point, we rolled up in the lead of our category (yay!).  Our wives got us all stocked up and what not, we emptied the boat of water, and just as we were being informed we were "8 minutes ahead"... the next team cruised up!
Crap.
Then the next team.
Double crap.
It's not that we were that long at the support point, it's just that they had made up a ton of ground (water?) in that last stretch of Lake Vernon.  Looking at the Check Point timing later, we did have an 8 minute lead, then we didn't.
We managed to get through Fairy Lake (9) still in the lead, and rolled into the Brunel Locks (10) still there.
Brunel Lock Portage (10) and Muskoka River
The portage was easy, but then my partner stopped to pee.  Nature calls, you answer!
We were about 10 seconds too slow and it cost us getting into the water first... in fact both teams chasing us passed us there.  Then another team budded in front of us.  They're old and fast, so we let them go, but we shouldn't have.
Back in the water now in 3rd, we pushed extra hard downstream to catch the team in front - they took the bad line through some shallow stuff, we caught up, they tried to stay ahead, we managed to get them and put them behind us... that should be that, right!?
We couldn't catch the 1st team though, they were strong and seemed fresh, like they'd just rolled out of bed.
Mary Lake
This is where we flipped in 2019 in horrible conditions, wicked waves, and so I was happy to see it nice and calm.
Uneventful paddle across the lake, but now it was getting dusky.
We hit Port Sydney now in the dark.
A Quick Word on Paddling In the Dark 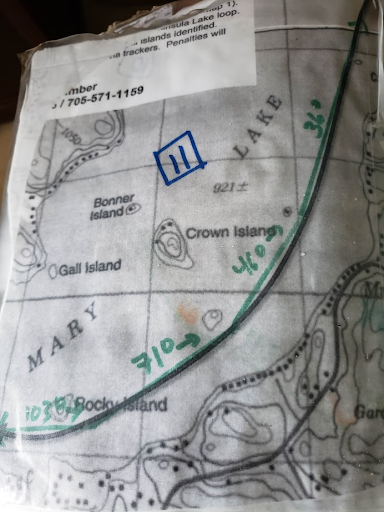 Everything looks different, deceiving.  Distances are confusing.  Things that you thought would be obvious (like how far the end of the lake is from where you are!) aren't.
We had a good handle on the first few islands going back across Mary Lake, and I made the mistake of not looking at the map - and by the time I did need to look at it, I had lost all track of where we were!
Fortunately the navigation is pretty straightforward but that's a lesson for next time (if there is a next time).
We found the mouth of the Muskoka River, so all good.  Good riddance, Mary Lake, consider yourself revenged.
Muskoka River Upstream
Just as we entered the river, the 3rd place team caught up and passed us.
We were sad.  Didn't expect that.  We had been a bit clumsy across the lake, I was messing around with the maps a bit and such, but they clearly put in a solid effort while we were daydreaming.
Upstream wasn't too terrible, except for the light fog that had set in... with the lighting it was really hard to see.  We knew of one tricky dead-end to avoid, right after this really special tree - and we went right up the dead end, even though we saw the tree!
We also beached ourselves coming into Brunel Lock, on a shallow section we knew about... it was just silly stuff, but with fatigue and darkness it happens.
Fairy Lake and Penn Lake
The lakes were pretty uneventful, we had our bearings, we stuck with them, we found what we needed to find.  The GPS shows us going straight between points so it all worked out.
We saw the 2nd place team light up every so often, presumably checking maps, and they were a bit more meandering than us - but we couldn't catch up.
By this point I was pretty wiped, bit of brain fog, not sure we would have had the juice for a final sprint if it had come down to that!
Finished just ahead of our schedule and just like that we'd paddled 110km!
3rd place in our category, just under 5 mins behind 2nd place... but we'll take it for sure.
Reflections
This is the longest endurance event I've ever done, not counting the 24h MTB race (which I only was on the bike for half of, since we did it tag-team!).
It's not the hardest thing I have ever done (that is Ironman by a lot) but it's definitely not easy to keep going for over 15h!  Fortunately there were distractions most of the time, whether it was navigating or dealing with river obstacles, trying to find landmarks in the darkness... a lot to pay attention to.
I am not a canoe racer - I'm an adventure racer and gravel rider who happens to paddle - so I don't know if we'll do this again.  It really depends on the next race the come up with, if they go back to the old Muskoka River X course I'm in.  For now, big success, demon slayed, on to the next thing!
Posted by jonovision_man at 4:34 PM