Eventful race for me!  Ultimately, disappointing, but eventful. 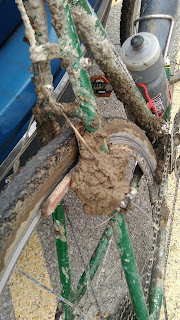 I registered too late so was in Wave 3 (instead of my usual Wave 2).  This put me 5 minutes back, which really wasn't that big a deal.  My main concern was that there wouldn't be good people to draft off on the first rail trail...

... wrong.  In actuality, there were great people to draft off - and it was my legs that just weren't up to the challenge today.  Rough start, felt it early and painfully.

The other concern was the rain - it was pelting when I arrived in Ancaster, but by race start it was gone and held off the whole day!

The headwind was very, very brutal, and in our faces most of the race.  I wheel-sucked every chance I got, already well into the red... it was shaping up to be a tough day.

There's one part of this ditch that's basically single file - and sure enough, it was single file, with a pretty hefty line-up by the time I got there.  My first taste of course congestion (and sadly not my last)

I rode this pretty well, lots of walkers in the way (and if you were walking a fat bike or mountain bike, you should be ashamed of yourself!).  This used to dump out onto a farm road, but instead it used the field itself to get back to the road - quite a bit tougher, muddy and soggy.

Headwind and Roads and a Farm...

This all sucked - the wind was so horrible.  I grabbed every wheel I could find but it was still just punishing.  It wasn't until I was swallowed up into a group of about 20 riders that finally there was some relief.

I broke my rear derailleur hanger here a few years ago, so it's only fitting that this is where my rear shifting completely stopped working.  I haven't investigated yet - I thought it was a broken shifter cable, maybe it still is.  But long story short, my shifter could no longer shift and I was suck permanently in the highest gear on the rear (the smallest cog).

Paris to Ancaster is not a race you want to be stuck on your smallest cog... you need all of them!!!

Nightmare.  My cadence was so slow through this section, I walked parts I know I would have normally ridden.

Headwind and Roads and the 40km Race

The organizers NEED to fix this - they had it licked a few years ago, where the 40km race would start late enough not to interfere with the 70km... but they added some stuff in the early race and with the headwind and conditions we ended up mixed in with the 40km folks.

My friend in Wave 2 had the same problem - and he didn't have a mechanical.  He didn't have it nearly as bad, though.

At the end of the completely congested rail trail there is a little ditch exit thing to get back to the road...

We waited in congestion, standing there like idiots in a line, for 10 minutes.

Ridiculous, and completely avoidable by just starting the 40km 15 minutes later.  And it's not like this hasn't been a problem before, they know about it, but just don't do enough to address it.

More Roads and Rail Trails and Farmers Fields and and and...

Everything was horrible after that - my gearing was right about 1/2 the time and horrific the other 1/2.  My cadence couldn't have been more than 30rpm at times, it just zapped my legs.

And that headwind - wow.  Usually wind slows you down, this just stopped you in place if you didn't keep pushing.

At some point there was a hill and I had the idea to pull on the derailleur cable with my hand while pedaling... and it actually worked, it was connected somehow in the shifter to something that I could put tension on it and find a lower gear!

Of course, holding your shifter cable while pedaling is not great... but it got the wheels turning...

So just before the first mud chute, I stopped and grabbed a small stick, wedged it in there to put some tension on the cable.

Voila!  It got me up about halfway through the cassette!  Suddenly hills weren't quite as bad...

Going downhill was terrible though... but at this point in the race I was far more concerned with the ups than the downs.  And frankly it wasn't much of a "race" for me anymore, just a ride for survival.

The small stick gave up on me at the bottom of the last mud chute - and I was lucky to find a thicker short stick. 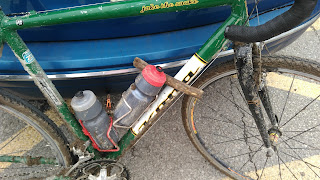 It looks ridiculous, but it worked - I was able to get into the lowest gear I have for the final climb.

Unfortunately... 2 hours of turning big gears had really just destroyed my legs, and while I rode a pretty good chunk of the final climb I didn't manage to ride it all without walking.

I don't know - but I'm assuming horrible.  Well over 3 hours.  I'm sure a lot of people had hard days, but I had an even harder day than most I'm sure!