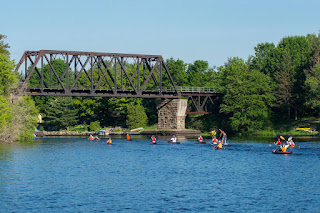 Big East River X is a 40km canoe race.  This year we did it in the stock C2 category (two people canoe).

The start went well - we managed to tag on to the back of the biggest glut of boats.  Water was calm as we went through the "narrows" and into the lake.

There was some confusion - we were supposed to go around an orange buoy, but there was also an orange windsock... most people went around it, even though it was out of the way!  We didn't, and someone called us cheaters... but I assume they would retract that when they found the later actual buoy.

Then we got to the river.  It starts out wide and deep with minimal current.  At that point we were going neck and neck with another boat, we seemed to be able to match their pace pretty well.  First we were leading, then we were drafting.

But as the river became more complicated, it became clear their ability to control the boat far surpassed ours... we could muscle through things reasonably enough, but wildly off course while they held really nice lines.  Before long a small gap turned into a large gap turned into them being out of touch entirely.

Most of the difficulty was finding the channel in the river - there were a lot of sandbars, and it wasn't always obvious where the deep part was (if there was one at all!).  Really slowed us down.

We should have been able to make up time - but when I look at our speed, we didn't.  Again, our ability to read the river just wasn't good enough... we kept getting ourselves into places where you couldn't paddle, or taking bad lines. Traffic had a bit to do with that, lots of boats going up while we were going down, some of them doing some pretty wild things!

Overtaking people was a bit of a challenge too - the main channel is narrow, and people didn't seem to want to budge.  These were C1s that had a 10 minute head start, so we weren't really racing them - they should have been more generous in my opinion!  One lady parked her boat right in the middle and didn't acknowledge us at all... she was just fast enough that when we got out of the main channel it was hard to get ahead of her.  Finally I used a corner to throw it down the inside and give her no choice but to go wide to make the corner without contact.  Not ideal, but hey, that's racing.

There was one boat behind us pretty much the entire race - they would get closer, we'd hear their voices, increase the pace... only to have them catch up again.  This went on and on!  We just couldn't lose them.

When we exited the river to the lake it was a shock - the wind had whipped up some rockin' and rollin' waves.  Pretty serious business - we had a hard time just keeping the boat moving forward!  At least it felt like that, in the end our pace was pretty OK... except the guys behind us caught up to us.

We tried to hold them off, but just couldn't close the gap.

Then the crazy happened - a motorboat passed us on the left, then immediately cut right in front of us, nearly swamping us in massive wake.  @#$%!!!  By law you are responsible for your wake!  Even just as a courtesy you'd think you'd be more aware of canoes, but NOPE.  We managed to collect ourselves and keep plowing ahead, but that was pretty damn scary.

We made one final push to the end but couldn't catch the boat in front - couldn't have been more than 15 or 20s gap.  Ah well.

Our overall average was only 8.0km/h, which isn't great - but our pace is pretty normal for us in all of the sections.  Except downstream... I would have expected that to have gone better.  But the river was tricky, and it seems to have cost us.  (Also I'm not sure how great the GPS is at capturing distance over all those twists and turns!).

So all in all a pretty good outing and a reminder that we still have a lot to learn in this sport!