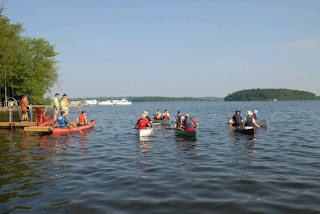 Hard to believe this will be my 7th year at this race - wow have we come a long way, baby!

I have organized teams, joined other teams, and filled in... every year it's a crap-shoot, but I always seem to end up racing.

This year a friend of mine needed a paddler, and I'm a paddler, so I'm back!  Then the team had a cancellation so I took on a run stage as well... in for a penny, in for a pound.

The last time I paddled was 2014 and it was crazy... ferocious waves crashing over the bow, other boats flipping, me bailing like a crazy SOB just to keep us afloat...

This year we have a new boat with much taller sides, so that shouldn't happen regardless of the weather.  It might be rough but I intend to stay dry!

I will be paddling with a buddy I haven't paddled with, other than a test run (which went fine!).  Should be pretty exciting/interesting.

I swear I've raced this stage before, but I can't really find any record of it... I've definitely pre-run it one year.  I remember it as one of the prettier stages - all in the Ganaraska Forest.  Lots of sand and hills make it challenging... and the odd dirt bike flying by makes it slightly terrifying at times!

Most important though is not getting lost - many have, there are a lot of turns and trails that shoot off in various directions.  Important to follow those blazes...